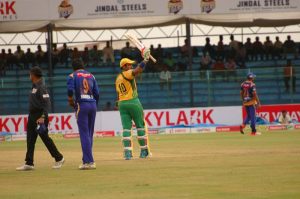 Hubballi, September 6, 2015: Robin Uthappa came to the party in style hammering an unbeaten 45-ball 73 to steer Bijapur Bulls to a convincing seven wickets victory over Hubli Tigers in the Karbonn Smart KPL 2015 here on Sunday.

The India opener who came in at the fall of the first wicket was circumspect to start with before opening his shoulders to send the Hubli players on a leather retrieving spree. He slammed six fours and four sixes during his tenure at the wicket and in the company of skipper B Akhil (24 n.o.) knit together 64 runs for the unbroken fourth wicket.

Uthappa found his rhythm early and his confidence grew and he began middling the ball. Once he changed gears, the home team bowlers were not their own self and wilted under his slaughter.

Earlier a 58-ball identical 73 by Hubli opener KB Pawan enabled Hubli post a decent 152 after being invited to bat.

Hubli began well with Taha and Pawan negotiating the Bulls’ attack with confidence. But the departure of Taha saw the Hubli batsmen who followed struggle and none seemed to be able to give Pawan the support at the other end.

Even as Pawan went about accumulating runs, wickets fell at regular intervals at the other end and finally the total of 152 proved to be insufficient to defend for the bowlers.

Uthappa collected a cheque for rupees ten thousand for his efforts which fetched him the as the Man of the Match award.

Speaking about his preformance, Uthappa said, “It was a good game. It was an important toss to win and I think we bowled pretty well and contained them to a manageable total. The wicket actually got better as the game progressed and I knew that if I just played my role it would be an easy target to chase.”