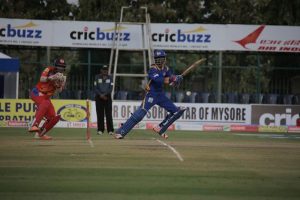 Hubli Tigers posted a convincing 23 runs victory to sashay into the title tilt on Sunday.

Taha who has been in belligerent form, had struck an unbeaten 58 on Friday to lead his team into the Qualifier II.

On Saturday, when his team was inserted, Taha continued from where he had left off on Friday and hammered the Panthers attack at will. His rousing form saw the Tigers notch 50 in just six overs with Taha scoring 44 of those runs.

Taha was involved in two fruitful partnerships, 54 for the first wicket with KB Pawan (9) and 64 for the fourth with Nithin Bhille (27) that was instrumental in the Tigers posting a daunting 177 for six in their 20 overs.

The Panthers’ chase began in right earnest with the first over producing 17 runs. But thereafter the Panthers’ batsmen felt the pressure of scoring over nine an over and began losing wickets with the Tigers’ bowlers maintaining a tight line and length.

They lost the first four wickets for just 64 on board in the 11th over. A late surge by the middle order and late order was not enough to deny the Tigers their place in the final.

KN Bharath (48), Praveen Dubey (24) and Stallin Hoover made valiant attempts to see their team through, but medium pacer SL Akshay thwarted their efforts claiming four for 29 in his four overs.

The fielding standard was top class from the Tigers who gave it everything and saved as many runs as possible and pouched most of the catches that were offered.

“This is a really special award for me with this being the semi-final match. I take this opportunity to dedicate this award to my Dad, who has supported and back me right through. I would like to thank my team to believing me and hopefully I can contribute tomorrow in the final too”, said man of the match Mohammad Taha after collecting his award, a cheque for rupees ten thousand.

The Tigers will take on Bijapur Bulls in the final on Sunday evening.

The Bulls hold the edge having prevailed the last time the two teams met in the league stage in Hubballi. The Tigers will need a better effort if not the same of Saturday if they are to nurture hopes of holding aloft the glittering Trophy.