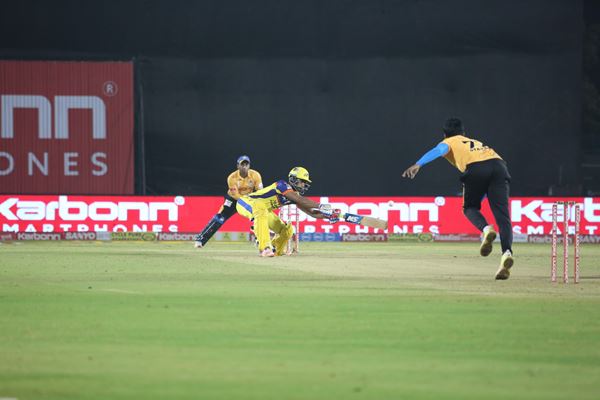 Mysuru Warriors won the battle between two of the most impressive teams in this year’s edition of the KPL when they carved out an eight-wicket win over Hubli Tigers at the KSCA Stadium in Rajnagar on Wednesday night.

The winners gave a clinical performance on the day with their bowlers starting a process that was finally completed by the batsmen.

The batting aided immensely by three crucial partnerships, of 63 in 44 balls for the first wicket; 50 in 32 balls for the second and 59 in 38 balls for the third, settled the issue. The common thread through two of these partnerships was left hand opening batsman Arjun Hoysala (58; 42b, 1×6, 8×4) who had fellow opener Rajoo Bhatkal (21) and man of the match Akshay Kodoth  (50 n.o;  39b, 4×4) playing the supporting role. On his dismissal skipper Manish Pandey (25 n.o, 15b, 2×6) joined Kodoth and took the team past the rivals’ 169 and thereby to its sixth successive win.

Earlier, put in to bat Hubli Tigers started in a rousing fashion with their aggressive opening batsman Mohammed Taha dealing in boundaries.

Taha faced a mere 18 deliveries, two of which he despatched over the ropes. He cracked five boundaries too and ensured that all but a single run came in boundaries. But Hubli’s problem was that they failed to build any big partnership, with the best being the opening stand of 37 runs between Taha and Manjesh Reddy (22).

But for medium pacer Vyshak Vijaykumar (4 for 40) sending down a couple of no-balls in the 20th over and getting punished for it Hubli would have been bowled out for a lower score.

Mayank Agarwal became the first batsman to make 1000 runs in KPL cricket during the course of his unbeaten 66 against Rockstars on Wednesday.

Agarwal who represented Davangere Diamonds in the first two years of KPL, during 2009 and 2010, made 398 during those years. When the KPL was revived in 2014 he represented Bellary Tuskers and made 167 runs.

He has been turning out for Belagavi Panthers these last two years and has amassed 451 runs. He has thus far accumulated 1016 runs from 32 outings in KPL cricket.