Both teams have lost three out of their first four matches in the championship.

Kings XI Punjab (KXIP), after their first four games, have found themselves in a bit of a hole in the 2020 Indian Premier League (IPL). Losing three matches, KL Rahul and Co are precariously placed seventh in the table. However, their net run rate of +0.521 isn’t that bad and it could help them going ahead in the tournament.

They last lost to the Mumbai Indians (MI) on Thursday in Abu Dhabi. KXIP are next scheduled to lock horns with MS Dhoni’s Chennai Super Kings (CSK) on October 4 at the Dubai International Cricket Stadium.

It’s also the second of Sunday’s doubleheader. Both CSK and KXIP have lost three of their first four games, but it’s the former, who are the cellar dwellers due an inferior net run rate. In their last game, they lost to Sunrisers Hyderabad (SRH) by seven runs.

The pitch in Dubai has been a decent one for batting. But bowlers also have had their say. Scores over 200 have also been registered at the venue. However, teams batting first have gotten a significant advantage while chasing hasn’t been all that easy.

The conditions will be fairly warm with the temperature around 34 degrees Celsius. The humidity will be in the 50s with dew to play a part.

Playing Combinations for KXIP vs CSK

Glenn Maxwell has had a horrendous campaign in the 2020 IPL. Having scored only 30 runs at a terrible strike-rate of 81.08, he’s had a rough run. However, he has more than impressive numbers against the Super Kings.

In six games, he has 215 runs at an average and strike-rate of 35.83 and 190.27 respectively. It seems to be a matter of time before Maxwell finds his form and rhythm.

Faf du Plessis has been in scintillating form in recent times without a shred of a doubt. And he is fond of Punjab’s bowling attack as well. Against the Mohali-based team, Faf has 367 runs from 10 matches at an average and strike-rate of 45.88 and 147.98 respectively.

The right-handed batsman also has five half-centuries with a top score of 96. KXIP would love to see his back the earliest.

KXIP vs CSK Head to Head 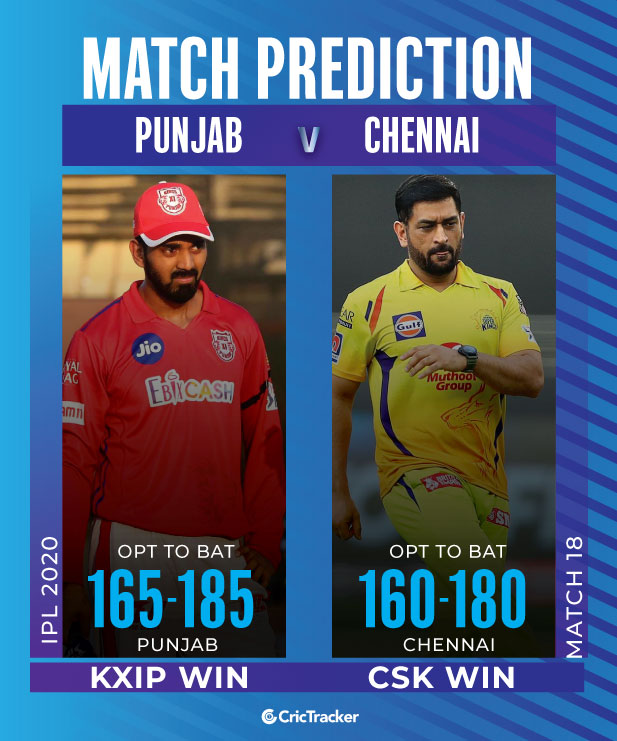