The Knights have won 17 out of their 25 matches against the Mohali-based franchise.

Kolkata Knight Riders (KKR) must be high on confidence, especially after how they have played following their defeat to the Mumbai Indians (MI). In the ongoing Indian Premier League (IPL), Dinesh Karthik and Co are sitting pretty in the fourth spot on the points table.

The Men in Gold and Purple would also be high on confidence after beating the Chennai Super Kings (CSK) by 10 runs. The Knights are next scheduled to lock horns with Kings XI Punjab (KXIP) on Saturday, October 10 at the Sheikh Zayed Stadium in Abu Dhabi.

KL Rahul and Co, on the other hand, have been indifferent and need a string of wins to turn their fortunes around. They even lost their previous game against the Sunrisers Hyderabad (SRH) by 69 runs and don’t seem to be in a great rhythm by any means.

The pitch in Abu Dhabi has been a sporting one thus far. It’s neither been a batting paradise nor been a bowler’s dreamland. Rahul Tripathi and Shane Watson showed the other night that run-scoring is possible, though the pitch got a little slower in the second-half of the game. The conditions will be warm with the temperature around 33 degrees Celsius and humidity in the high 50s.

Playing Combinations for KXIP vs KKR

Nicholas Pooran hasn’t had an overly great IPL thus far, but he has been reasonable. In KXIP’s only game in Abu Dhabi, he got a 27-ball 44 and seemed to find the boundary without much fuss. Though KXIP lost, Pooran would have breathed a sigh of relief. Even in the one game he played against the Knights last year, the left-handed batsman scored 48 runs at an impressive strike-rate of 177.78.

Sunil Narine is pretty of the Punjab-based franchise. With the bat, Narine has 164 runs against them at an average and strike-rate of 23.43 and 178.26 respectively. The left-hander also has a highest-score of 75 that he got in 2018. With his slow off-breaks, the Trinidadian has 26 wickets- the most he has picked against any opposition- at an average and economy rate of 17.46 and 6.78 respectively.

KXIP vs KKR Head to Head 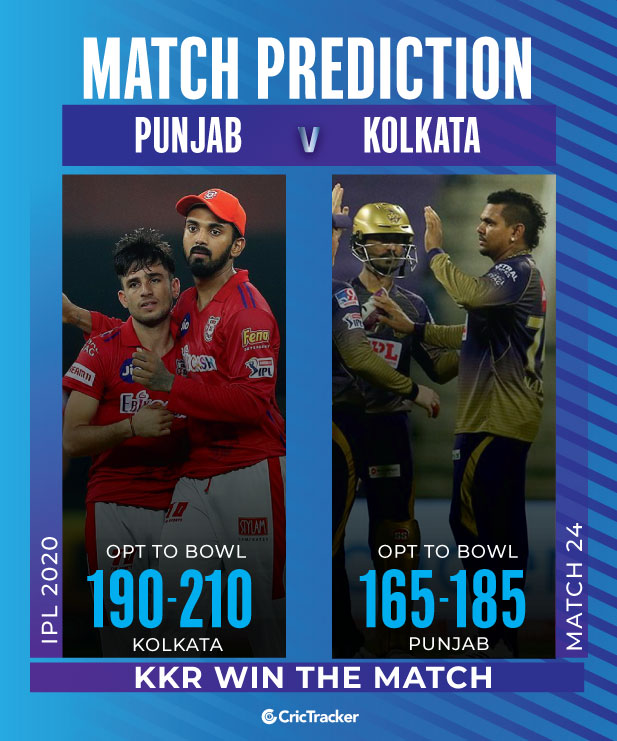