Both the teams have lost a Super Over contest each and won one of their three games.

Kings XI Punjab (KXIP) had a decent chance of winning all their three games thus far in the Indian Premier League (IPL). However, KL Rahul and Co have won only one match and are placed midway in the points table. Having conceded the highest successful IPL run-chase to Rajasthan Royals (RR), their confidence must be rock bottom.

They will now be facing Mumbai Indians on Thursday. KXIP also have a few adjustments to make as they will be playing for the first time this season at the Sheikh Zayed Stadium in Abu Dhabi.

MI, on the other hand, missed out agonisingly against Royal Challengers Bangalore in a thrilling Super Over game in Dubai. But having already played two games in Abu Dhabi, it can be said that Rohit Sharma’s men will be a tad ahead going into the next game.

The pitch in Abu Dhabi hasn’t been all that easy to bat on like the one in Dubai and Sharjah. It’s rather been a sporting wicket where the batters have had a fair bit of say. Chasing can be tricky, though the side batting second has won two out of four times. The conditions will be warm and sunny with the temperature around 25 degrees Celsius. The humidity levels will mostly be in the 40s.

Playing Combinations for KXIP vs MI

KL Rahul has exceptional numbers against the Mumbai-based franchise. In 10 matches, he has 486 runs at an average and strike-rate of 69.43 and 130.65 respectively. In fact, he has scored 22 per cent of his IPL runs versus MI itself. In those games, he has three fifties and a century in Mumbai. In the ongoing season, he is KXIP’s leading run-scorer until now with 222 runs at an average of 111.

Rohit Sharma scored 80 runs against KKR, but succumbed failures in MI’s other matches. In the two games where he didn’t score, his team also lost. Yet, he remains as their top run-scorer with 100 runs. His numbers against KXIP aren’t the worst either. In 23 matches, Rohit has 590 runs at an impressive average and strike-rate of 32.78 and 141.49 respectively to go with five half-centuries.

KXIP vs MI Head to Head 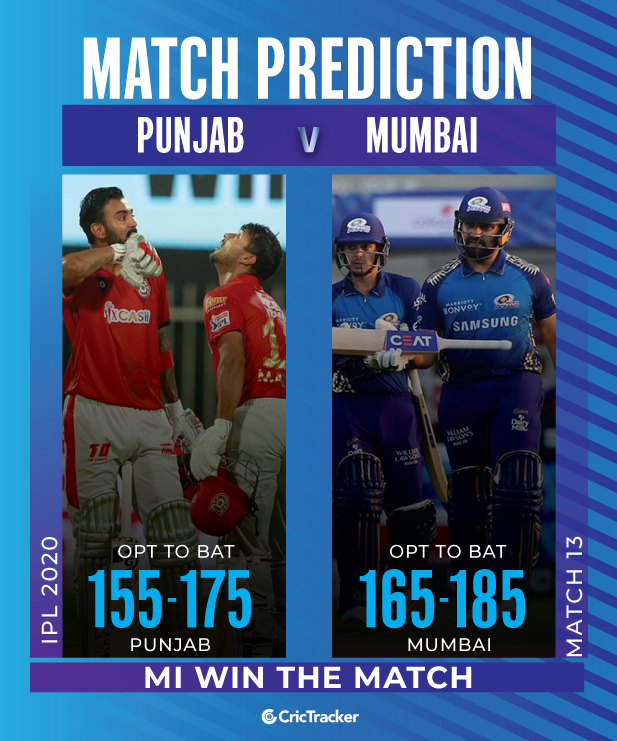