Indian players have been quite active on social media these days and it was evident from the comments on Agarwal's picture.

Meanwhile, Team India hasn’t braced the field since their New Zealand tour. The Virat Kohli-led side was going to lock horns with South Africa in an ODI series in March. However, the series was called off in the wake of COVID-19 debacle soon after the first ODI at Dharamsala was abandoned due to rain.

Since then, all players have no option but to spend time at home while waiting for the sporting action to resume. The BCCI is yet to give any update on the resumption of cricket. The commencement of much-awaited IPL 2020 is also uncertain at the moment as COVID-19 cases are increasing in India with every passing day.

Meanwhile, in the absence of international cricket, many Indian stars have been sweating out at home. To keep themselves on toes, several players like Suresh Raina, KL Rahul and Virat Kohli have shared videos and photos of their indoor workouts.

29-year-old Mayank Agarwal, on Friday, also shared his workout picture for his fans where he was seen hanging upside down. “On a scale of 1 to 10, the head rush I get when I’m trying to explore the ‘Upside Down’ is ELEVEN,” Agarwal captioned the picture.

On a scale of 1 to 10, the head rush I get when I'm trying to explore the 'Upside Down' is ELEVEN. #BalanceTraining #FlashbackFriday

Indian players have been quite active on social media these days and it was evident from the comments on Agarwal’s picture. Kohli was the first one to pull Agarwal’s leg as he wrote, “Kya ho gaya bhai. Lockdown has reached unbearable limits I guess.” 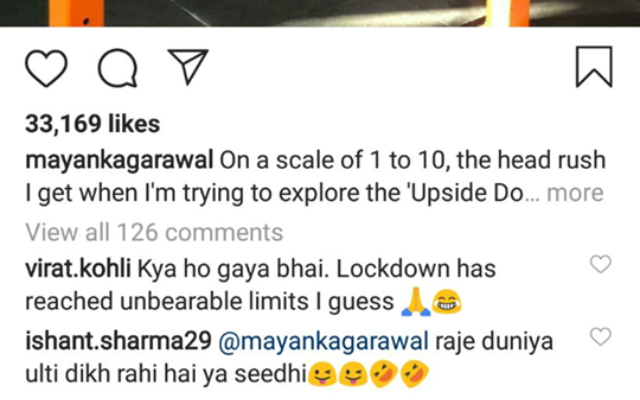 All Indian stars could be seen in action whenever the BCCI hosts IPL 2020. According to reports, there’s a strong possibility that the cash-rich league will be organized in either UAE or Sri Lanka in the latter part of the year.