Rashid Khan is the player you can't afford to miss while making your fantasy teams. 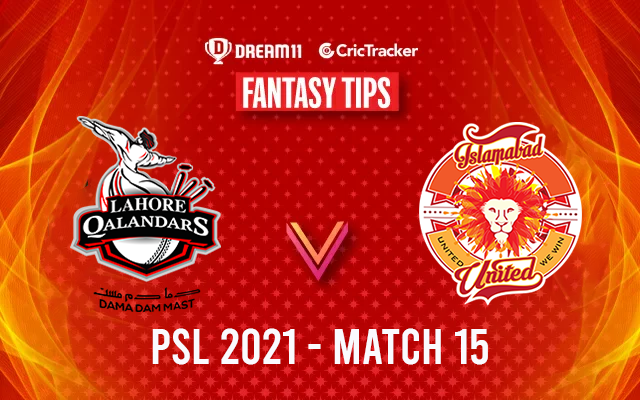 After the covid outbreak in Pakistan, PSL is all set to resume in UAE from the 9th of June. Lahore Qalandars will take on Islamabad United in the 15th match of the tournament. Lahore Qalandars so far have played 4 matches, winning 3 and losing the one. They are currently placed at the 4th spot in the standings with 6 points.

Islamabad United will definitely be going to miss the services of Paul Stirling and Alex Hales, but their replacements Usman Khawaja and Colin Munro are renowned batters who can do well in their absence. With 3 wins and a loss, United are at 3rd spot in the standings with 6 points. It will be interesting how these teams perform on foreign soil.

It’s a balanced wicket with equal help for both batters and bowlers, batting will become much easier in the latter half of the match. Anything close to 180 is a good competitive score on this wicket.

Also Read: ‘Virat Kohli made it a big news’ – When Rohit Sharma forgot his wedding ring in a hotel room

Fakhar Zaman has been the consistent performer at the top of the order, who has scored huge runs in the recent overseas series. He has scored 189 runs in 4 matches so far in this year’s PSL at an average of 63.

Usman Khawaja will be the star attraction for Islamabad United and he is likely to play his 1st PSL game. He did really well in the BBL 2020-21, scoring 338 runs in 15 matches at an average of 24.14.

Mohammad Hafeez cricketer is an inspiration to many youngsters. His pure timing and ability to hit the sixes are one of his pure strengths. So far in this tournament, he has scored 181 runs in 4 matches at an average of 90.5

Shadab Khan is a good young cricketer who had led the side quite well in this year’s PSL. Top performances are yet to come from his side in this tournament. He is a brilliant all-rounder player and you must include him in your fantasy teams.

Rashid Khan is the player you can’t afford to miss while making your fantasy teams. His variations are a nightmare for any batter in the world and he is a decent striker lower down the order as well.

Hasan Ali is a go-to go bowler to his captain for whichever team he plays. In this year’s PSL, he has scalped 6 wickets in 4 matches at an impressive economy of 5.56.

Ben Dunk should be the first-choice wicketkeeping option for your fantasy teams, provided he is fit to play. In 3 innings so far in this year’s PSL, he has notched 80 runs at an average of 40 with the highest score of 57*.

LAH vs ISL Must Picks for Dream11 Fantasy Cricket:

Rashid Khan is an effective bowler who will trouble the batters from the start and he doesn’t bowl too many bad deliveries. It’s worth a risk in picking him as your fantasy team skipper.

Usman Khawaja is an elegant left-hand batter who likes to play long innings. He is a risky captaincy pick for your fantasy teams.

Agha Salman has played only 2 matches in this year’s PSL and has scored 21 runs in only innings he has batted. Considering the fact that there are too many competitors in the all-rounder’s category, you can avoid him while making your fantasy teams.