Mohammad Haris has been impressed with his batting skills.

Lahore Qalandars will take on Peshawar Zalmi in the final league game of the PSL 2022 on Monday. Both sides are already qualified for the playoffs but are aiming to finish at the second spot. Lahore Qalandars played good quality cricket overall in this tournament and came out on top on six occasions. Fakhar Zaman is in an extraordinary run of form, having scored over 500 runs. They are placed at the second spot in the standings with 12 points.

Peshawar Zalmi on the other hand, are heading into this match on the back of three consecutive wins. They changed their approach in the second half of the tournament which is working extremely well for them. With 5 wins and 4 losses, they are at the third spot in the standings with 10 points.

Bowlers have done a splendid job in the last couple of matches, having said the wicket still looks good for batting. The team’s batting first has a good track record of winning matches here.

Fakhar Zaman is having a magnificent tournament so far. He has struck 521 runs in 9 matches which includes one century and six half-centuries.

Shoaib Malik has scored the most runs for Peshawar Zalmi in this PSL season. In 9 matches, he has smashed 314 runs at an average of 44.85 with the highest score of 58 and even picked up 2 wickets.

David Wiese is an asset for Lahore Qalandars, he has done a reasonable job as an all-rounder in this tournament. In 9 matches, he has scalped 6 wickets and scored 103 runs in 7 innings.

Liam Livingstone hasn’t lived up to the expectations so far in this tournament. In 4 matches, he has scored 39 runs at a strike rate of 111.42 and picked up 2 wickets with the ball. You can still back him and include him in your fantasy teams.

Not only with the ball, Shaheen Afridi has impressed with his captaincy skills. He has picked up 14 wickets in 9 matches in this league at an economy of 7.33.

Seamer Salman Irshad has been the pick of the bowler for Peshawar Zalmi in this competition. In 7 matches, he has picked up 12 wickets at an economy of 8.32 with the best figures of 3 for 29.

Mohammad Haris is the find of the tournament for Peshawar Zalmi. The 20-year-old wicketkeeper batter has scored 148 runs in 3 matches at an average of 49.33 with the highest score of 70.

LAH vs PES Must Picks for Dream11 Fantasy Cricket: 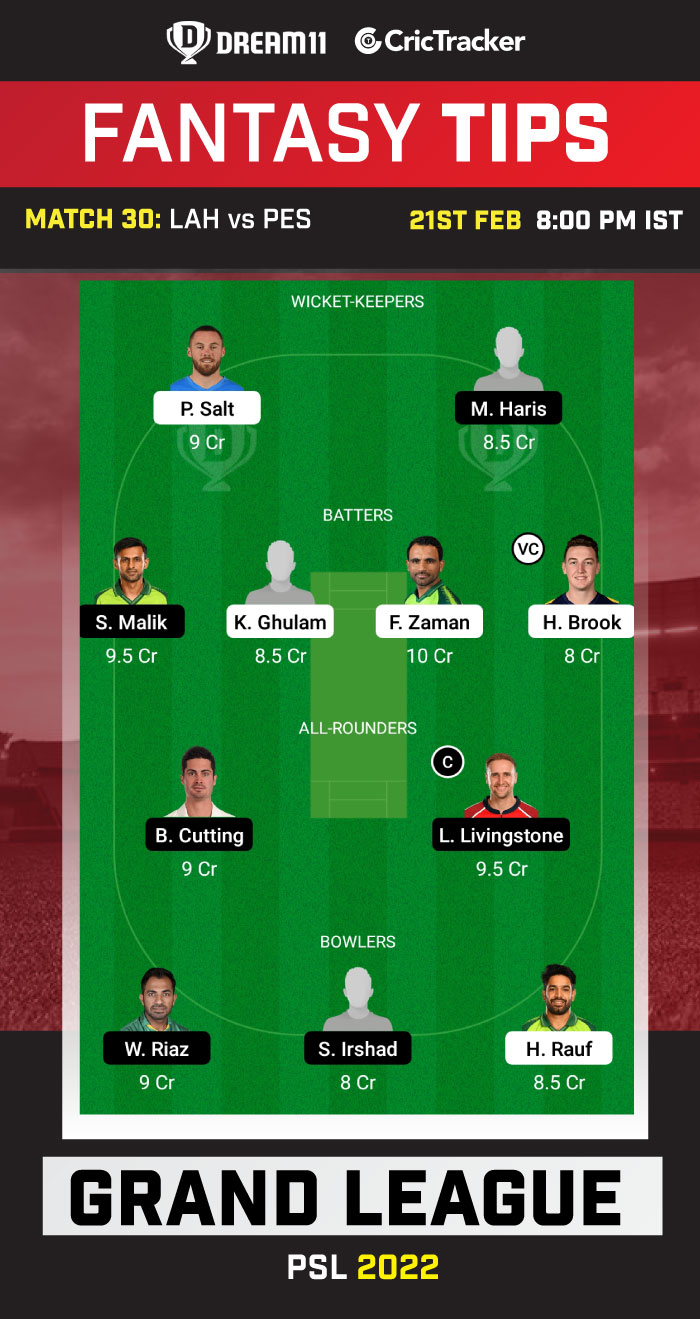 Kamran Ghulam has scored 209 runs in 9 matches in this tournament at an average of 26.12. He is a risky captaincy pick for your fantasy teams.

Ben Cutting has added 197 runs and picked up one wicket in this tournament. You can take a risk and pick him as your fantasy team skipper.

Going with the team balance, it’s better to avoid Yasir Khan while making your fantasy teams.