Both teams would be going into the game on the back of defeats against the Multan Sultans in the warmups.

Lahore Qalandars ended as the cellar dwellers in the first four editions of the Pakistan Super League (PSL). However, the fortunes have turned for them this time around as they made their maiden playoffs in the T20 tournament.

But ahead of the playoffs, they lost their warm-up match against Multan Sultans and it would have dented their confidence to some extent if not a whole lot. In the Eliminator, they would be locking horns with Peshawar Zalmi in the second of Saturday’s doubleheader at the National Stadium in Karachi.

In the first round, the Qalandars beat the Zalmi once out of two times. The Zalmi, on the other hand, got through with only four wins and also lost to the Sultans in the warmups. They will have to pull their socks up in order to make further progress.

The pitch in Karachi isn’t the worst for batting by any means. The batters have got runs freely, but the bowlers have reaped benefits as well. Chasing should be the way forward as the dew factor might play a huge role.

There are no chances of rain with the temperature around the 25 degrees Celsius mark. The humidity won’t be on the higher side with the numbers mostly in the mid-40s.

Playing Combinations for LAH vs PES

Ben Dunk was in sparkling form in the league stage of the 2020 PSL. He was arguably their standout batsman. The left-hander notched 266 runs at an average and strike-rate of 53.20 and 186.01 respectively.

With a top score of an unbeaten 99, he smashed 15 fours and 23 sixes from the 143 balls he has faced. If Dunk gets his eye in, he could make the Zalmi bowlers chase leather.

Faf du Plessis will be one of the star attractions among the foreign players in the tournament. He is also set to make his PSL debut and would want to play a match-winning knock in his maiden appearance itself.

The former South African skipper is fresh from playing for the Chennai Super Kings (CSK) in the Indian Premier League (IPL) and was one of their prolific run-scorers in the event.

LAH vs PES Head to Head 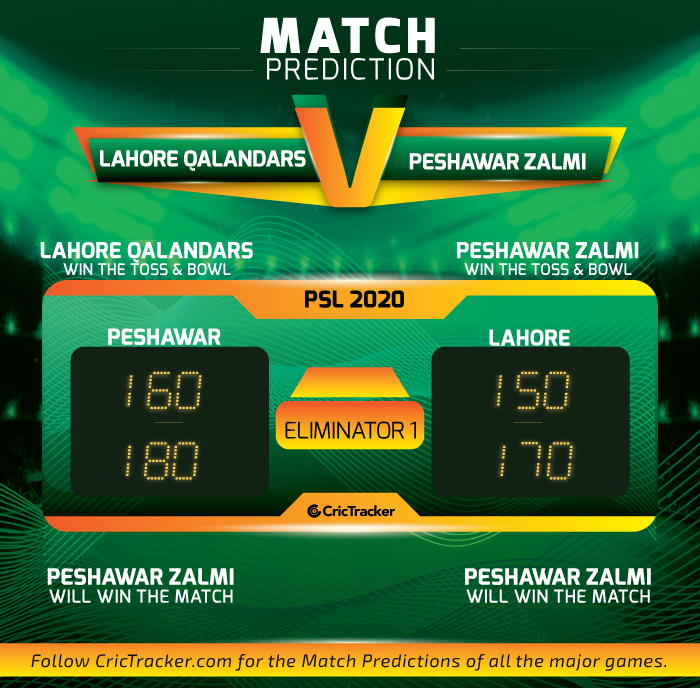