On the head-to-head count, the United have an 8-2 lead over the Qalandars.

The Islamabad United were in all sorts of trouble in the ongoing edition of the PSL after Fawad Ahmed was tested positive for COVID-19. However, the team, captained by Shadab Khan, beat the Quetta Gladiators by six wickets to continue their impressive run in the tournament. They will next be facing the Sohail Akhtar-led Lahore Qalandars on Thursday, March 4 at the National Stadium.

On the head-to-head count, the United have an 8-2 lead over the Qalandars. Lahore, on the other hand, have had an impressive campaign as well, winning three out of their first four matches. In their previous meeting, they got past the Karachi Kings by six wickets. The Qalandars are in good form and they would be looking to defy the odds and beat the United, who are in red-hot form.

The pitch in Karachi has been an absolute belter for batting. The bowlers haven’t had much room for error by any means. Teams batting second have gotten most of the advantage and hence, chasing should be the way forward. The temperature will mostly be around the 26 degrees Celsius mark.

Playing Combinations for LAH vs ISL

Mohammad Hafeez has been in excellent form in the ongoing edition of the PSL. In four games, he has managed 181 runs at an average and strike-rate of 90.50 and 175.72 respectively. With a top score of an unbeaten 73, the veteran seems to be in the form of his life with the willow in hand.

Alex Hales has arguably been the standout batsman for the United in the tournament thus far. In four games, the right-handed batter has racked up 139 runs at an average and strike-rate of 34.75 and 171.60 respectively. In the powerplay, Hales will again be looking to give his team a quick start.

LAH vs ISL Head to Head 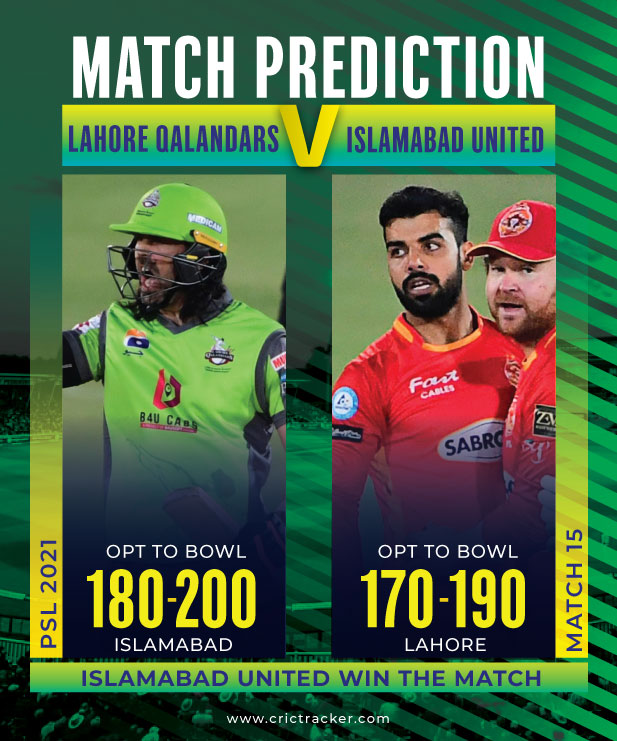