KXIP players are on top in all departrments.

The points table in the 2020 Indian Premier League (IPL) underwent a change after Royal Challengers Bangalore’s match against the Kings XI Punjab in Dubai. The game turned out to be a one-sided affair as KL Rahul and Co beat RCB by a mammoth 97 runs. Moreover, the Mohali-based franchise also managed to move to the top after the thumping triumph on Thursday, September 24.

Rahul notched the highest individual scored by an Indian batsman in the history of the T20 tournament. He smashed 14 fours and seven sixes en route his 69-ball 132*, which also propelled KXIP to a massive 206 for three in their 20 overs. In the run-chase, RCB lost wickets in heap in the early part of their innings and could never find themselves in a commanding position.

With the victory, Rahul and Co moved to the top of the points table, based on a superior net run rate. The Challengers slipped to the sixth spot, even as Dinesh Karthik’s Kolkata Knight Riders (KKR) remain as the cellar dwellers after their defeat at the hands of Mumbai Indians in Abu Dhabi. Sunrisers Hyderabad (SRH) and KKR are the only teams, who are yet to register a win.

In the Purple Cap standings, KXIP’s Mohammed Shami is sitting pretty at the top. He has four wickets from two matches and what puts him atop is his economy rate of 4.36. After his three-wicket haul against Delhi Capitals (DC), Shami got rid of youngster Josh Philippe against the RCB. KXIP’s Ravi Bishnoi and Sheldon Cottrell also have four wickets to show for their efforts with the ball in hand.

Prior to Thursday’s match, Chennai Super Kings’ Faf du Plessis was the Orange Cap holder, scoring fifties in the first two matches. However, Rahul, with his jaw-dropping knock, overhauled his tally and is now at the top. In two matches, Rahul has 153 runs at an average and strike-rate of 153 and 173.86 respectively. KXIP’s Mayank Agarwal also has 115 runs at a decent strike-rate of 143.75.

Here’s the updated points table for IPL 2020 and Orange and Purple cap holders: 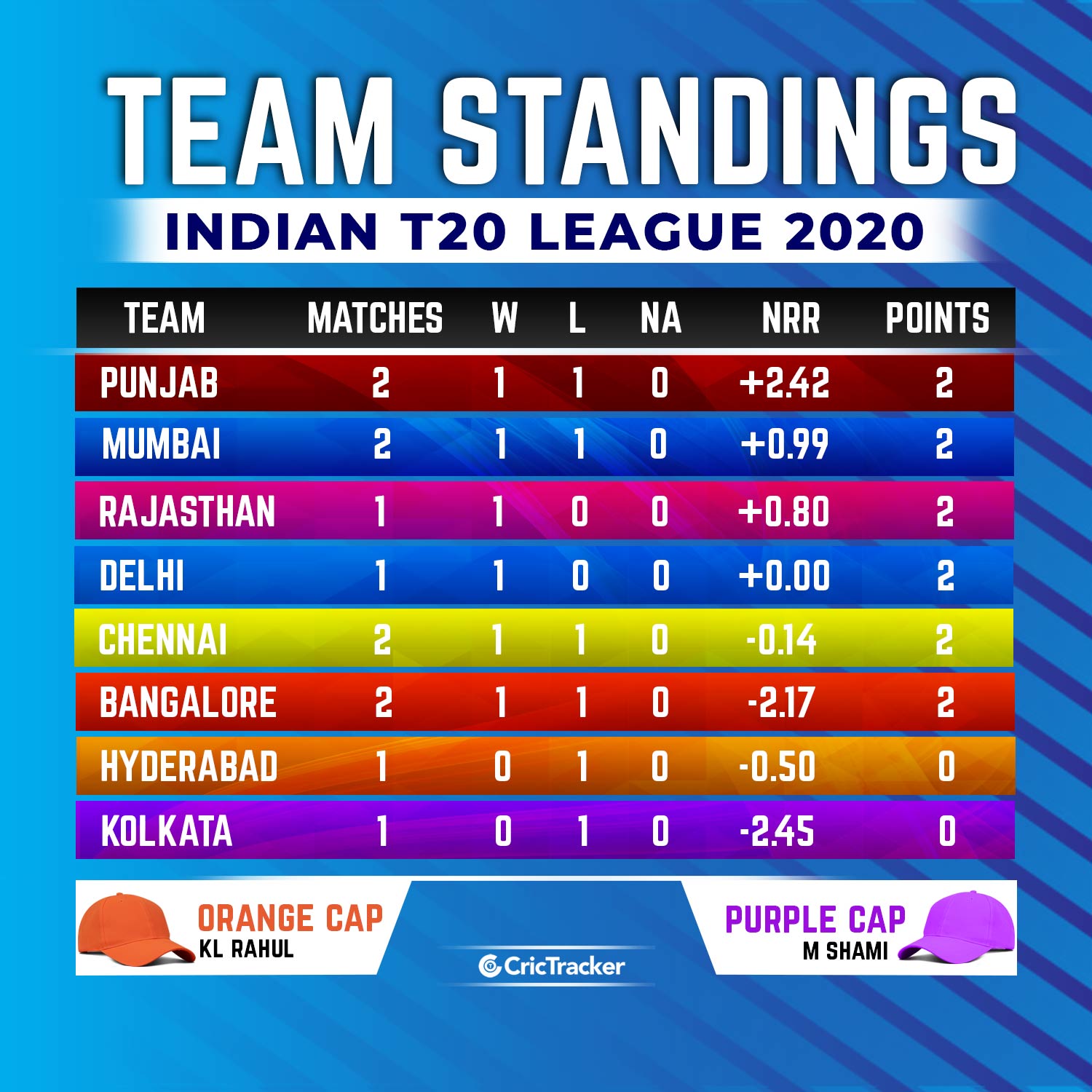