LPL 2020: Teams, Squads, Fixtures, Timings, Broadcaster, Live Streaming, and all other details you need to know

LPL 2020: Teams, Squads, Fixtures, Timings, Broadcaster, Live Streaming, and all other details you need to know

In a bid to ensure the safety protocols and guidelines, all the matches will now be played at the Mahinda Rajapaksa International Stadium in Hambantota.

The Sri Lanka Cricket (SLC) is finally set to host the inaugural edition of the Lanka Premier League, which is set to go underway from 26th November 2020, when Colombo Kings will take on Kandy Tuskers in the opening match. The league was originally scheduled to commence in August 2020 but was postponed multiple times owing to the COVID-19 pandemic. The SLC revised the dates a number of times after several meetings with the health officials, and the league, on 5th November, was given the green signal finally.

Earlier, matches were scheduled to be held in Kandy, Dambulla, and Hambantota, However, in a bid to ensure the safety protocols and guidelines, all the matches will now be played at the Mahinda Rajapaksa International Stadium in Hambantota. The tournament will follow the format of double round-robin between 5 participants – Colombo Kings, Kandy Tuskers, Jaffna Stallions, Galle Gladiators, and Dambulla Hawks – over 20 fixtures, before a playoffs stage.

Speaking ahead of the tournament Ravin Wickramaratne, Vice President, SLC and the Tournament Director of the LPL stated “Holding of the tournament in Hambantota and in one venue, enhances our plan of setting up and maintaining an effective bio-secure bubble, and with the approval coming from the government, we are now confident of going ahead with the tournament.”

“The tournament will not only create a platform for local players to develop their skills by playing alongside world-class players but will also provide an opportunity for Sri Lankan cricket fans to watch a quality cricket tournament,” Wickramaratne added.

Here is everything you need to know about LPL 2020

TV: Matches will begin at 7.30 PM IST and on the double-header days, the first match will start at 3:30 IST. Sony Pictures Networks India (SPNI) has acquired the exclusive media rights for the LPL 2020. The matches, in India, will be telecasted on Sony Sports & Sony Ten. 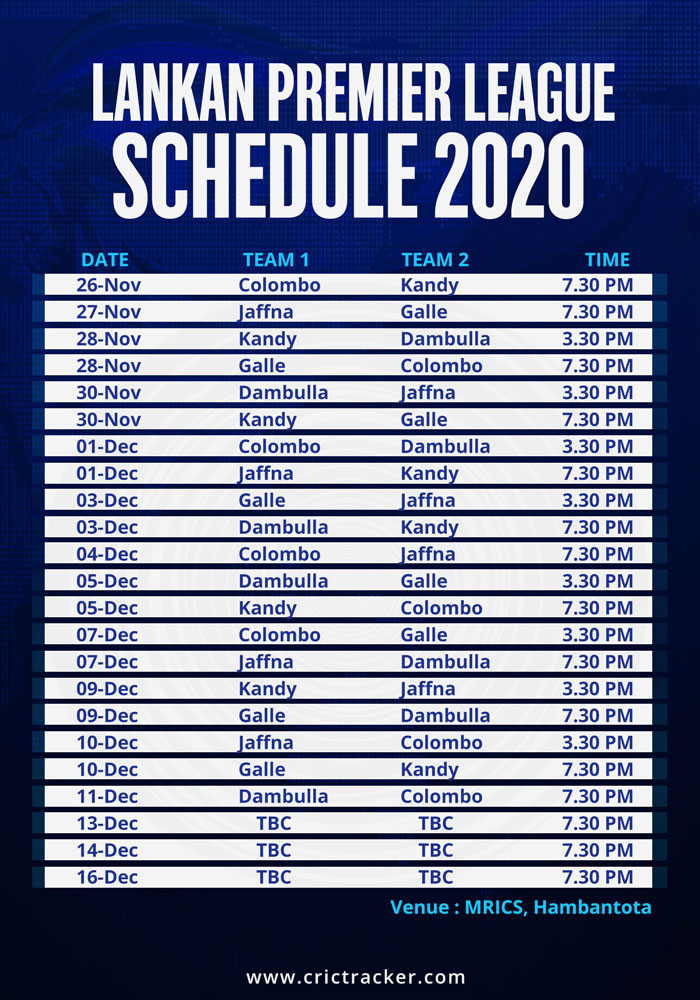