Shaun Marsh has scored four fifties in seven List A innings at the Drummoyne Oval.

The 12th match of the Marsh One-Day Cup 2019 will be played between New South Wales and Western Australia at the Drummoyne Oval in Sydney.

This game will be live on the Cricket Australia website.

It looked quite easy for NSW when Daniel Hughes and Moises Henriques were going well. The duo added 142 runs for the 2nd wicket in 19.5 overs before Henriques got out for a 65-ball 75. Hughes didn’t find much support from the other end as the equation came down to 20 runs from last two overs. Hughes got to face only four balls in among those as his unbeaten 96-ball 112 resulted in a defeat.

The rain did trouble the first game of the season at the Drummoyne Oval. However, on Wednesday, skies will be empty throughout the duration of the match and no interruption is expected.

The Drummoyne Oval was expected to be a high-scoring venue and it did saw a high-scoring match on Monday which was reduced to 35 overs. The sides batting first would be feeling anything over 300 as a safe total here. The shorter side boundaries here helps in producing big totals and also aids the chasing teams.

Ashton Turner was replaced by Hilton Cartwright ahead of their 3rd match. Turner suffered a finger injury and is unlikely to play on Wednesday.

At the end of the 2017/18 season, Daniel Hughes’ List A record read 782 runs from 14 innings at an average of 65.17 with three hundreds and four fifties. Last season, he scored 79 in a game but only 18 runs in the remaining four innings. Even in the ongoing edition, Hughes scored only 29 and 7. But the unbeaten 112 will give him the much-needed confidence.

Shaun Marsh now has four fifties from seven List A innings at the Drummoyne Oval and would be hoping to add one more on Wednesday. Western Australia’s pace trio of Nathan Coulter-Nile, Andrew Tye and Jhye Richardson continue to be crucial in fantasy cricket.

Moises Henriques has begun to bowl a decent number of overs which would make him a good option as captain or vice-captain. 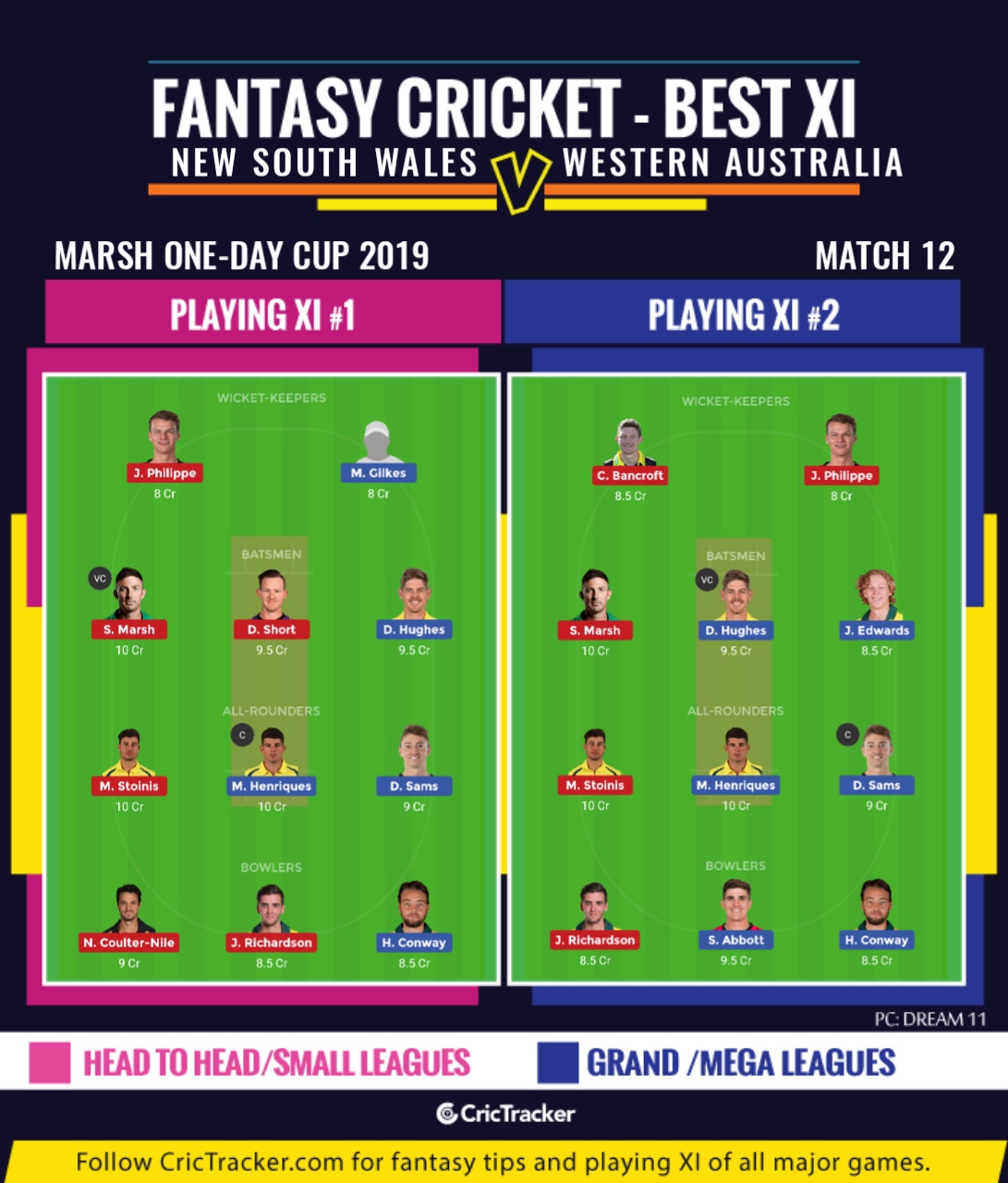 Only one of Mitchell Marsh and Marcus Stoinis are expected to perform well given the identical roles they play for Western Australia. Marsh bats higher compared to Stoinis but the later has been more effective than his skipper thus far.

Western Australia is expected to seal their 2nd win over NSW in three days span.