Aaron Finch scored his career-best List A score of 188* in the previous match.

The 14th match of the Marsh One-Day Cup 2019 will be played between Western Australia and Victoria at the WACA Ground in Perth.

This game can be viewed on the Cricket Australia website.

The Western Australia team has got off to a flyer in the Marsh One-Day Cup 2019 with three straight victories. They thumped Victoria and Tasmania in their first two games by big margins before edging past New South Wales. However, in the very next match, the NSW team got better of Western Australia to hand them their first defeat of the tournament.

They will now host Victoria once again just like in the first match of the competition. The Victorian team’s batting struggled in the first three matches where they bagged only one win. Even that win came by the virtue of a collapse by Tasmania trying to earn a bonus point. They finally put an end to their misery when Aaron Finch scored an unbeaten 188 against Queensland just before the Sheffield Shield break.

A bit of cloud cover is expected throughout Wednesday in Perth. From 12 PM local time, the weather forecast indicates the chances of showers.

In three matches this season at WACA, the batting first team scored more than 300 in two games. Players who enjoy pace are likely to score big here. If the home team Western Australia bat first again, we are likely to witness another 300+ total.

Aaron Finch is fresh of a career-best knock of 188* after a string of low scores. Cameron Bancroft and Peter Handscomb and pushed down the order and their best is yet to come. Shaun Marsh just scored his maiden first-class double century. Will Sutherland is contributing with both bat and ball for Victoria. Josh Philippe and Sam Harper will be the X-factors from the keepers’ category.

Aaron Finch will be a perfect choice as captain or vice-captain after his recent most knock of 188*. 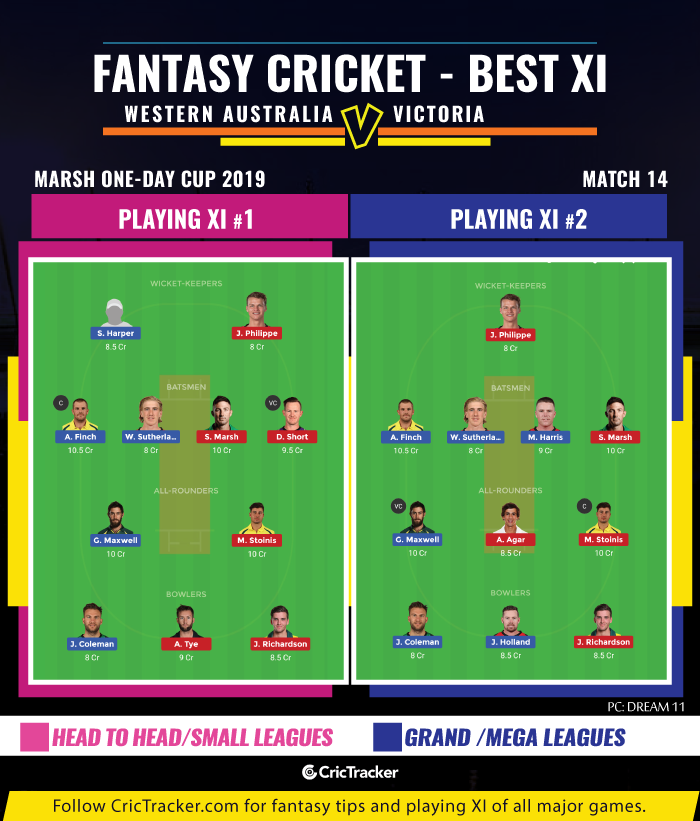 Will Pucovski and Matthew Short are expected to sit on bench to let Victoria pick an extra pacer. The duo cost only 8 credits and can be picked if they are part of the playing XI. They will be helpful in neutralizing the costs of players. A total of four players are valued at 10+ credits for this game and few others of 9.5 credits.

Western Australia is expected to record their 4th successive win on the tournament.