Michel Neser and Labuschagne have been picked in more than 80% of the teams. They will not play this match. So don't pick them in your Dream11 Fantasy team.

The 19th match of the Marsh One-Day Cup 2019 will be played between Tasmania and Queensland at the Bellerive Oval in Hobart.

The match starts at 11:00 AM local time (5:30 AM IST) (12:00 AM GMT) This game will be live on Fox Sports in Australia and can be streamed on the Cricket Australia website in India.

Queensland and Tasmania will lock horns for the first time in the ongoing Marsh One-Day Cup in Australia on Monday in Hobart. Things have gotten extremely in terms of making it to the final among the second and third-placed teams. South Australia had a great chance to beat Western Australia on Sunday but they fell agonisingly six runs short of the target.

It will be pleasant weather for the game of cricket to take place. The sun will be out when the two teams will take the field on Monday in Hobart and the temperature will hover around 18-20 Degrees Celsius according to AccuWeather. There is no chance of rain whatsoever.

This is the first and only match scheduled to be played in this tournament this season. Having said that, the Bellerive Oval has hosted as many as 36 ODIs till date and the team batting second has found it tough to chase the score. The pitch is likely to get slower as the game progresses and the team winning the toss is expected to bat first.

Average first innings score: 243 (In 36 ODIs played at the venue)

Marnus Labuschagne, Michael Neser and Joe Burns are with Australia Test squad and won’t be playing this match.

Cameron Gannon and Nathan McSweeney have been included in the 13-man squad.

Usman Khawaja is one of the most consistent batsmen in Marsh One-Day Cup and he should be your top pick in Dream11 Fantasy. Bryant and Wildermuth are also exciting players with Stanlake expected to do well with the ball. Ben McDermott should be picked while George Bailey will also contribute with the bat. James Faulkner and Gurinder Sandhu could be crucial with the ball for Tasmania. 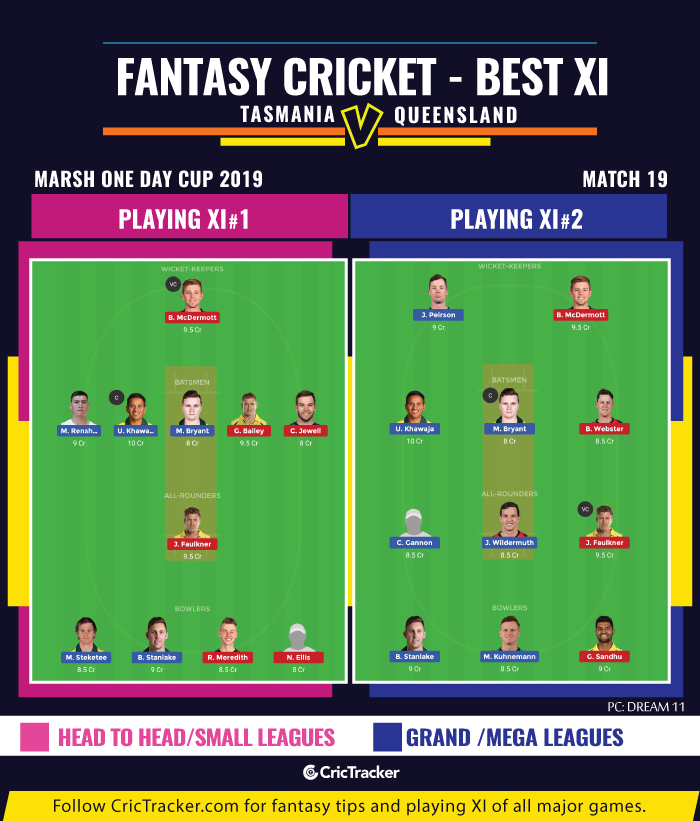 Michel Neser and Labuschagne have been picked in more than 80% of the teams. They will not play this match. So don’t pick them in your Dream11 Fantasy team.

Max Bryant is a very good batsman and can be made the captain of your team in Grand Leagues.

Queensland are expected to win the match.