Moises Henriques will be a good option as captain or vice-captain considering his batting form and chances of adding points with the ball.

The 6th match of the Marsh One-Day Cup 2019 will be played between New South Wales and South Australia at the Allan Border Field in Brisbane.

This game will be live on Fox Sports in Australia and can be streamed on Cricket Australia portal in India.

New South Wales and South Australia started their respective campaigns by playing Queensland at the Allan Border Field in Brisbane. Interestingly, both the teams ended up losing while defending a total. NSW banked on the fifties from Jack Edwards, Moises Henriques and Nicholas Bertus to finish on 305/5. The total was too less against an attacking Queensland line-up which chased it down with two overs to spare.

On the other hand, the South Australia team struggled with the bat in their first match. They were 105/2 at halfway stage collapsed to 182/8. Tom Cooper’s 62 and Joe Mennie’s quick 31 towards the end helped the SA side to finish with 226. After recording a 300+ chase, the target of 227 looked too less for Queensland. Three fifties for the top five helped the hosts to a 7-wicket win in 35.5 overs only.

Clear weather with periodic clouds is expected to be seen around the Allan Border Field on Thursday. The chances of rain are minimal and the short spells of rain could be seen towards the end of the day.

After recording a successful 300+ chase, the Allan Border Field saw South Australia struggle batting first. However, the hosts Queensland showed that there were no demons in the track. They chased down 227 with 97 balls to spare losing only three wickets. We could see scores around 275 on Thursday.

Jack Edwards started off the season with an 84-run knock. He scored hundred and fifty in the previous edition while opening the batting. His List A average reads 59.5 after six innings. South Australia will hope Callum Ferguson produces big knocks having scored two tons in the previous edition. Tom Cooper was the savior for South Australia with a 65-run knock. He also scored a hundred in the previous season. Sean Abbott took 12 wickets from six matches in 2018/19 but only one wicket in the last match which allowed Queensland to chase down a big score.

Moises Henriques will be a good option as captain or vice-captain considering his batting form and chances of adding points with the ball. 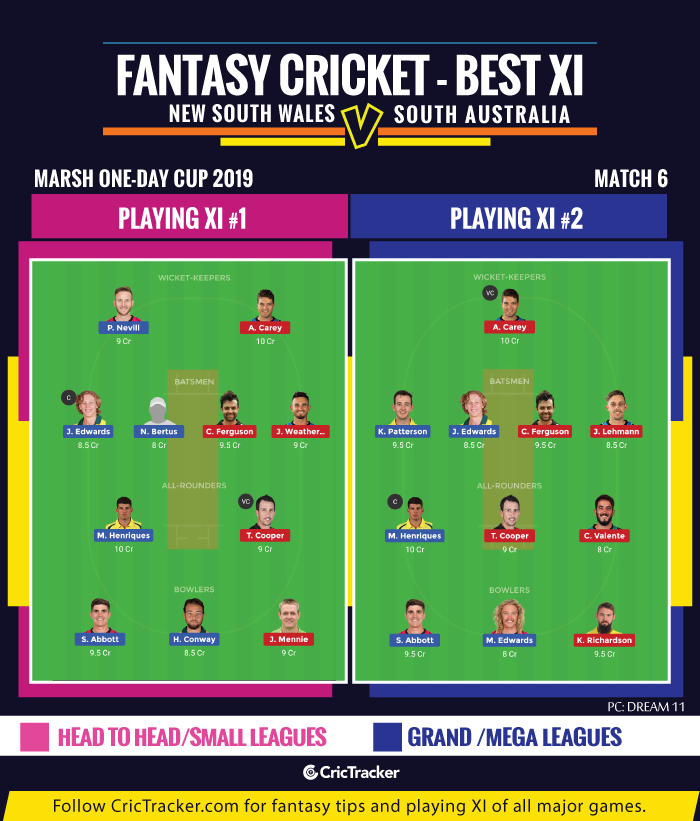 Daniel Sams wasn’t included in the NSW XI for the previous match. If Sams is included, he has to be picked at any cost in the fantasy team and preferred as captain or vice-captain. The short square boundaries will make things tough for the spinners. Adam Zampa was quite expensive in the last game as a result of that. And hence, we have not picked him in our Suggested XIs.

New South Wales is expected to put on a much better performance and register their first win.