The 13th game of the 2019 Malaysia Men’s CWC Challenge League A will be played between Malaysia and Vanuatu at the Selangor Turf Club in Kuala Lumpur.

This game can be viewed on the YouTube channel of Malaysia Cricket.

Malaysia has failed to get going into the home leg of League A’s CWC Challenge as they suffered their 3rd consecutive defeat. In the recent most match, the hosts got only 201 against Singapore despite opener Virandeep Singh scored 73. The total was too less against Singapore who had an inform batsmen. Timothy David recorded his 5th consecutive score of 60+ across all formats.

He scored an unbeaten 81-ball 95 as they chased down the target with 4 wickets and for the loss of four wickets. Malaysia will now face Vanuatu in their last match of the tournament. Vanuatu is the only side placed below the home team. They lost all the three matches in this tournament so far. Their recent game against Singapore resulted in a defeat as they were bundled out for 175 chasing a 218-run target.

Thunderstorms are expected throughout the day at the Selangor Turf Club. This meant we could finally have an interrupted game in this CWC Challenge tournament.

The trend of defending 200+ totals continued at the Selangor Turf Club as Denmark defeated Qatar by 60 runs after posting 258 on board. This is the 3rd time a team posted 200+ here and won the game. On both occasions of the first batting side failing to get to 200, they ended up on the losing side. With Malaysia to face Vanuatu on Wednesday, we might see this trend continuing.

Virandeep Singh has aggregated 179 runs in four matches and also picked up a wicket. Shane Deitz will be hoping to bring his experience of playing first-class cricket in Australia. He hasn’t got big runs and most of the points he earned are through catches behind the wickets. Nalin Nipiko scored 77 in the last match batting at No.6. Nazril Rahman scored 31 runs and took a wicket in the previous match.

Patrick Matautaava and Suharril Fetri have been the top players for their respective teams and will be ideal as captain and vice-captain. 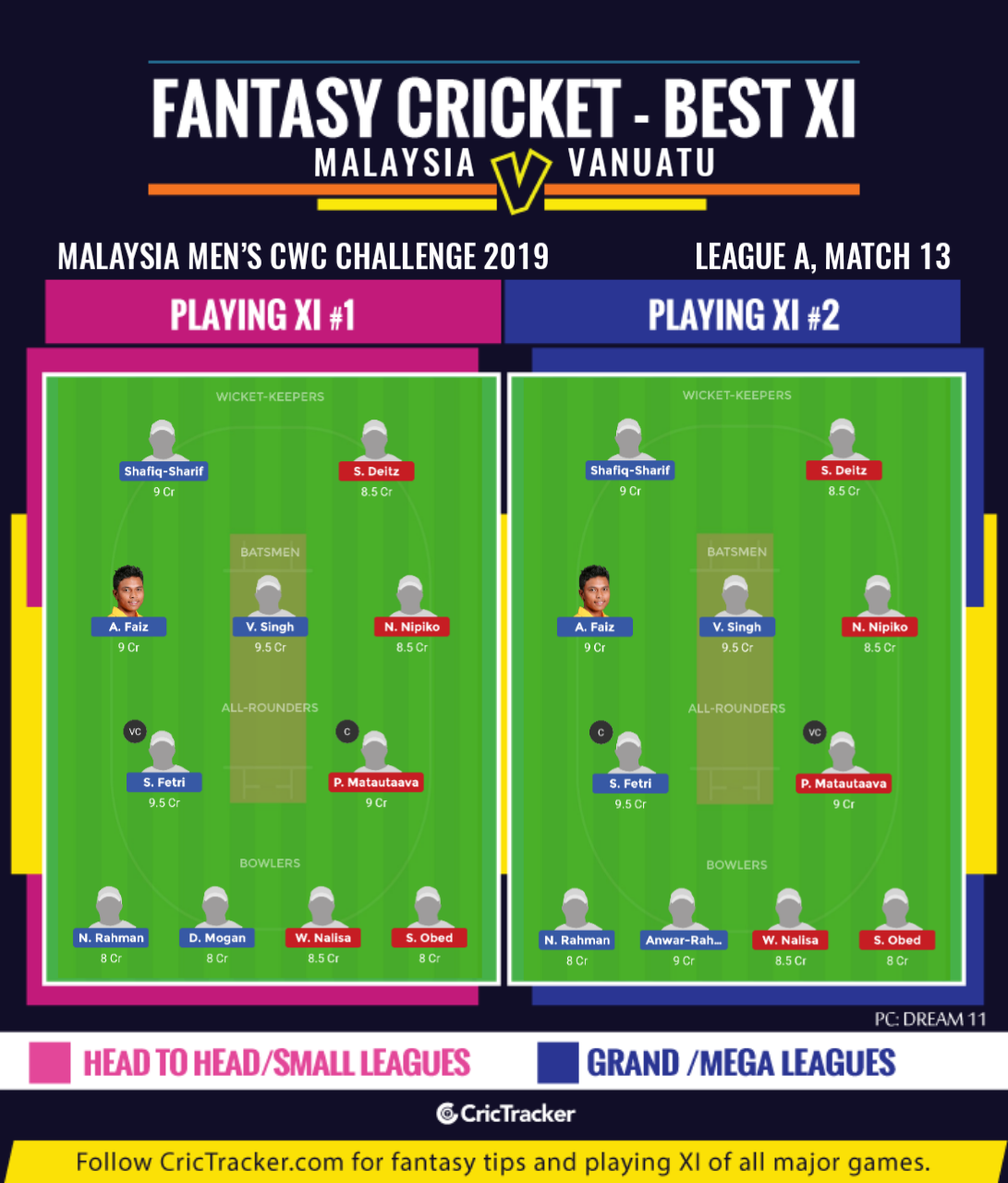 Given the inconsistency with the bat for both the teams, only Nalin Nipiko, Virandeep Singh and Ahmad Faiz look perfect choices from batsmen’s category. Virandeep and Nipiko recorded 70+ scores in their respective last match.

Malaysia is expected to finish the tournament with a win.