The 15th game of the 2019 Oman Men’s CWC Challenge League B will be played between Hong Kong and Kenya at the Al Amerat Cricket Ground Oman Cricket (Ministry Turf).

In the last match of Men’s CWC Challenge League B, Hong Kong will lock horns with Kenya and both the teams would be excited to win the last game in order to grab some points and improve their position in the rating table. For Hong Kong, Kinchit Shah has performed commendably well with the ball and bat. He has mustered 192 runs in four games and has grabbed five wickets.

He would like to replicate his form in the upcoming match as well in order to help his side win the match against Kenya. Kenya will be banking on their inform players Collins Obuya, Rushab Patel and Rakep Patel. They will have to come up with strong team effort in the upcoming match if they are looking forward to outclass inform Hong Kong team.

With no chances of rain, it is expected to be a perfect day for a cricket match. However, the temperature is expected to deviate between 21 and 27 Degree Celsius according to Accuweather.

The track is expected to go in favour of batsmen and spinners will also get some turn from the wicket in the second half of the match. However, the team winning the toss will look to field first as far as the trends of the tournament are concerned.

Kinchit Shah will be an important pick for any Dream11 Fantasy Side because he is performing well with the bat as well with the ball. He has mustered 192 runs in four games and has grabbed five wickets. Waqas Barkat will be another important player to watch out in the upcoming match. 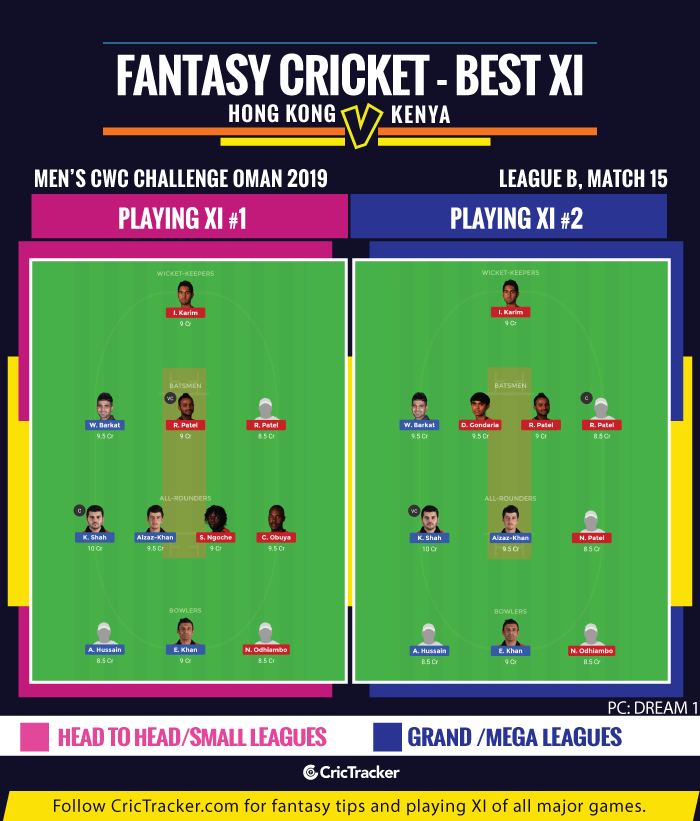 Waqas Barkat is still due to give breakthrough performances in the ongoing tournament. However, there could be a chance that he click a good knock with the bat in the last league match. Looking forward to Gorawara form, he could be a risky pick but will be worth for any Grand League Side.

Hong Kong is expected to win this match.