Mumbai Indians defeated the Kolkata Knight Riders by a big margin of 49 runs earlier this season. 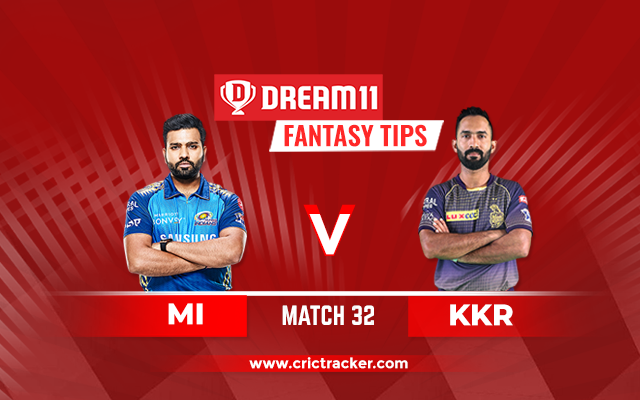 The 32nd match of the Indian Premier League (IPL) 2020 will be played between Mumbai Indians and Kolkata Knight Riders at the Sheikh Zayed Stadium in Abu Dhabi.

The defending champions, Mumbai Indians (MI), are only a few steps away from sealing a playoffs spot. Just 7 games into the tournament and the team has already registered 5 victories. With 10 points and a great NRR, they would look forward to winning at least three or four games out of the remaining 7 to hold on to a spot in the top-two. In their next encounter, they will be squaring off against the Kolkata Knight Riders (KKR).

The Knights are in the top four at this stage with 4 wins from 7 games. However, there is intense competition for the fourth spot with so many teams still in contention. Ideally, they would like to seal a win here in this game and climb up the ladder. But in their previous encounter against MI in this season, they ended up losing by 49 runs. KKR would look to draw level by winning this match and take the battle against MI further on if they get into the playoffs.

The temperature will be around 31 degrees Celsius for a majority part of the game. The humidity levels, meanwhile, will be in the early 50s.

Abu Dhabi is the only venue in this tournament where the chasing teams have fared considerably well. The pitch holds a good amount of assistance for the bowlers and the batters. Toss here shouldn’t make a massive difference.

169 (Thus far at this venue in this tournament)

Sunil Narine didn’t play the last game as he was reported for a suspect bowling action. The KKR veteran is currently working on it and might not start for this game.

Shubman Gill is the leading run-scorer for KKR this season with 254 runs from 7 games at an average of 42.

Rohit Sharma scored 216 runs in 7 matches. Even though he missed out in the last game, the MI skipper is expected to bounce back in this encounter.

Quinton de Kock scored 53 off 36 balls in the last match and seems to be getting back to his usual best.

In 6 innings, Kieron Pollard scored 174 runs and was dismissed only once. He also picked up a couple of wickets with the ball.

With 11 wickets in 7 games, Jasprit Bumrah is the leading wicket-taker for MI along with Trent Boult. Even though he hasn’t been at his usual best this season, he is a game-changer and must be a part of your team.

Andre Russell picked up 6 wickets this season and is the highest wicket-taker for his team. While he hasn’t got going with the bat yet, he can be mighty destructive if he gets into his zone.

Quinton de Kock has been slightly inconsistent this season. But the Proteas skipper hasn’t unleashed his full potential with the bat as yet. You can take a chance by having him as the captain of your Grand League team.

Mumbai Indians are predicted to win this match.