Suryakumar Yadav can be a good captaincy pick for your Grand Leagues. 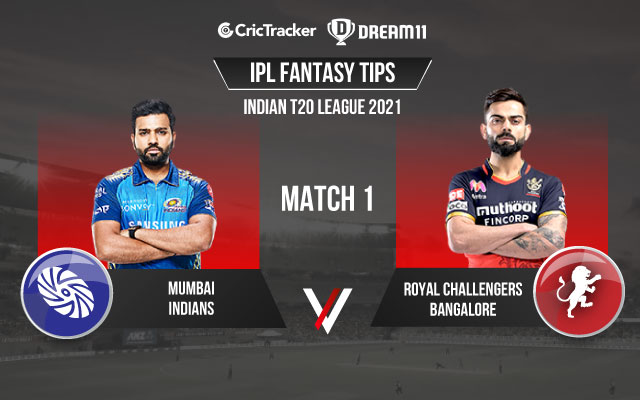 It has not even been five months since Mumbai Indians lifted their fifth IPL title. But they will be taking the field again, this time with the intention of defending their crown, as the cricket carnival for which enthusiasts from all across the globe wait throughout the year is back again, in all of its glory.

The 2021 edition of the Indian Premier League will start off with a game between the most successful franchise Mumbai Indians, and a franchise that is always packed to the brim with superstars but has never quite got going, in Royal Challengers Bangalore. Out of the 27 matches played between these two teams, Mumbai have won 17 times, which clearly shows their dominance. But Virat Kohli’s side has made some smart additions at the auction table and are looking like a force to reckon with.

The surface at MA Chidambaram Stadium in Chennai is a bit tricky for the batsmen to deal with. It is usually the spinners who extract the most purchase out of the surface on this track. Anything around 150 might be a competitive total here.

Playing XIs for MI vs RCB:

Irrespective of what tournament it is, if Virat Kohli is playing in it, he will be undoubtedly a top pick. He scored 80 runs in his last T20 game, which was against a strong English bowling unit. In that same series, he scored a total of 3 half-centuries.

Rohit Sharma looked a bit shaky in some games of that series, but he showed his calibre in the last match by scoring 64 runs. He has scored 2 60+ scores in his last 4 T20 games.

Hardik Pandya is bowling again, and in the recently-concluded T20I series against England, he looked intimidating with the ball. In his last 2 games, he picked up 2 wickets. Pandya also scored 30 runs in both games.

You will be making a mistake if you think Glenn Maxwell of 2021 will be as ineffective as the Glenn Maxwell of 2020 was. After a fantastic IPL, he had a good T20I series against New Zealand. In his last 3 games, he has scored 89 runs and has also picked up 2 wickets.

Jasprit Bumrah will be playing a T20 match after a long time. Mumbai’s bowling spearhead has picked up 10 wickets in his last 4 T20 matches.

On the basis of current form, Yuzvendra Chahal might not be an automatic top pick. But what is to be noted here is that while he wasn’t spectacular against England, he was amongst wickets in all the 5 T20Is. To add to that, the track here in Chennai will suit him perfectly.

Ageing like fine wine, AB de Villiers will aim to entertain cricket fans for another season. In his last 5 IPL games, he has scored 35 or more on 3 occasions.

From one end of the age spectrum to another, Ishan Kishan is another must-pick wicketkeeper for your team. The youngster has scored 30+ runs in 4 of his last 5 games in the 20-over format.

MI vs RCB Must Picks for Dream11 Fantasy Cricket: 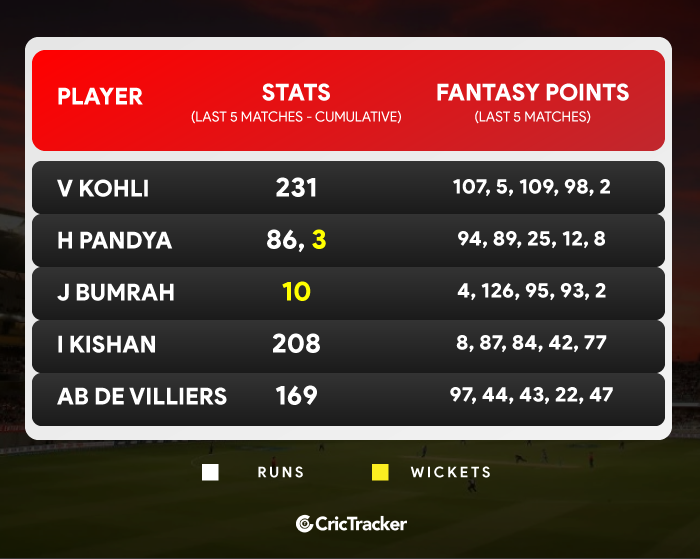 Sky has been the limit for Mumbai Indians’ ‘Sky’ Suryakumar Yadav in the recent past. In his last 2 T20Is against England, he scored 89 runs. Yadav can be a good captaincy pick for your Grand Leagues.

Chris Lynn is likely to play in this match, and he will also open the innings. In his last Pakistan Super League game, the Aussie scored 32 runs at an amazing strike rate of mover 225. He can be a risky captaincy pick.

RCB might have spent a fortune for Kyle Jamieson, but his recent performances are a bit concerning. In his last 5 T20s, he has picked up only 2 wickets. Since this is the first game, you can avoid him while picking your team.