IPL 2018: Here are the top bowling records after the first 10 years

IPL 2018: Here are the top bowling records after the first 10 years

Here we take a look at some bowling records registered in the IPL – season-wise since the inaugural edition of 2008.

The Indian Premier League (IPL) 2018 will begin at the Wankhede Stadium in Mumbai on April 4 when defenders Mumbai Indians (MI) will take on two-time champions Chennai Super Kings (CSK). The Super Kings are making a return after two seasons and will be looking to consolidate their impressive run in the IPL.

The IPL is generally seen as a batsman’s event, catering to the entertainment factor, but it doesn’t mean the bowlers have not achieved anything worthy in this slam-bang tournament. The likes of Lasith Malinga and Sunil Narine have made marks in the annual cricket carnival, giving everything to achieve the purple cap, the crown of the highest wicket-taking bowler in the IPL, just like the orange cap in the batting department.

Here we take a look at some bowling records registered in the IPL – season-wise since the inaugural edition of 2008.

Lasith Malinga: Lasith ‘Slinga’ Malinga has 154 wickets in 110 matches in the IPL and is the only bowler to have grabbed 150 wickets in the premier tournament. Malinga’s best figure in the IPL is 5 for 13 for MI against Delhi Daredevils (DD) in 2011. Malinga has an impressive average of 19.01 and economy rate (ER) of 6.86. He has four four-for’s in IPL.

Amit Mishra: The wrist spinner, who will play for his old team DD in 2018, stands second in the list with 134 wickets in 126 matches. A Sunrisers Hyderabad (SRH) player previously, Mishra averages 24.33 and has an ER of 7.41. His best performance of 5 for 17 had come against now defunct Deccan Chargers (DC) in the inaugural season. Mishra also has three four-fors in the IPL.

Harbhajan Singh: Turbanator Harbhajan Singh is the fourth highest wicket-taker in IPL with 127 wickets in 136 matches. A long-time MI player, 37-year-old Singh will play for Chennai Super Kings (CSK) this year. Singh has one five-wicket haul in the tournament which he got against his current team CSK in 2011 besides one four-for. Singh averages 26.54 and has an ER of 6.95.

Piyush Chawla: Piyush Chawla is the third Indian spinner to feature among the best five IPL bowlers with 126 wickets in 129 games. A reliable hand for Kolkata Knight Riders (KKR), Chawla’s average is 25.88 and ER of 7.63. Chawla’s best bowling figure of 4 for 17 came in 2011. He became the fourth bowler after the above three to capture 100 wickets in IPL.

Dwayne Bravo: The West Indian is back to his old team CSK and will look forward to consolidating on his tally of 122 wickets in 106 matches – a tally that puts him at the fifth spot in the list of the highest wicket-takers in the IPL. With an average of 22.27 and ER of 8.15, Bravo’s best bowling figure in IPL is 4 for 22 for Gujarat Lions (GL) against King’s XI Punjab (KXIP) in 2016.

Sohail Tanvir, 2008: The lanky Pakistani left-hander was the top wicket-taker in the inaugural edition with 22 scalps. Tanvir represented Rajasthan Royals (RR), the champions of that year, took his wickets in 11 matches with an impressive average of 12.09 and ER of 6.46. Tanvir’s best performance of 6 for 14 against CSK remains the best figure in IPL till date.

RP Singh, 2009: Left-handed pacer Rudra Pratap Singh took 23 wickets in 16 matches in the 2009 edition to end up as the highest wicket-taker that year. Singh represented the champions DC that year and averaged 18.13 and had an ER of 6.98. His best figure that year was 4 for 22 taken against KKR at Cape Town.

Pragyan Ojha, 2010: DC’s Pragyan Ojha became the first spinner in the history of the IPL to finish as the top wicket-taker in an edition. Ojha took 21 wickets in 16 games in this edition, averaging 20.42 and with an ER of 7.29. Ojha, who remained unsold in the 2018 auction, had 3 for 26 against MI as his best bowling figure in the 2010 edition.

Lasith Malinga, 2011: The Sri Lankan pacer finished as the highest wicket-taker in IPL 2011 by grabbing 28 scalps. Malinga, who represented MI, took 16 matches for his tally and averaged 13.39 and finished with an ER of 5.95. The bowler’s best figure of 5 for 13 came against DD at Feroz Shah Kotla ground.

Morne Morkel, 2012: In 2012, South African Morne Morkel became the third foreign bowler to finish as the highest wicket-taker in one edition of the IPL. He took 25 wickets in 16 matches at an average of 18.12 and ER of 7.19. His best figure was 4 for 20 against KXIP in Dharamsala.

Bhuvneshwar Kumar, 2016: Bhuvneshwar Kumar took 23 wickets in 17 games to become the highest wicket-taker in 2016. He played for SRH, the champions that year. Kumar averaged 21.30 and had an ER of 7.42 in that edition. His best figure of 4 for 49 was recorded against GL in Rajkot. 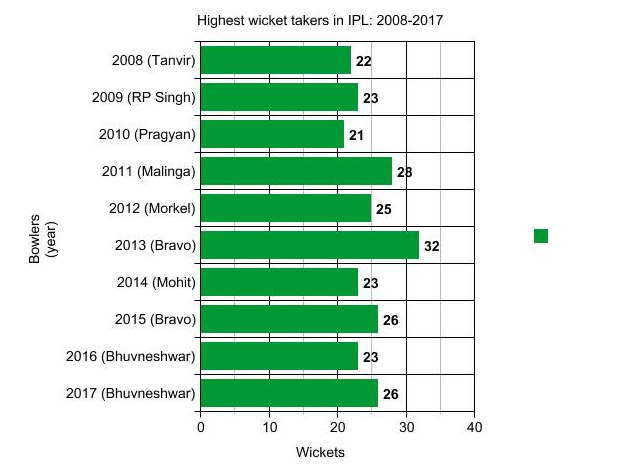 Most hat-tricks in IPL:

Hat-tricks in IPL present another interesting story. Till date, the tournament has seen 17 hat-tricks with wrist-spinner Amit Mishra taking three of them. Yuvraj Singh has two while 12 other bowlers have one each.

Mishra’s hat-tricks came for three different teams: for DD in 2008 against DC; for DC in 2011 against KXIP and for SRH against Pune Warriors India (PWI) in 2013.

Yuvraj Singh’s hat-tricks, on the other hand, came in the 2009 edition played in South Africa. He achieved them while playing for KXIP, against RCB and DC, respectively.

2008: Three hat-tricks were made in the inaugural season of the IPL and the records were crated by CSK’s Balaji and Ntini and DD’s Mishra.

2009: The second edition played in SA also saw three hat-tricks and all of them were by Indian bowlers. While Yuvraj Singh made two for KXIP, Rohit Sharma of that year’s champions DC registered the other. Sharma took the hat-trick against MI, the team which he later led to win IPL as many as three times.

2010: This edition saw just one hat-trick and it came from RCB’s Praveen Kumar against RR.

2011: Amit Mishra achieved the second of his three hat-tricks in IPL this year; for DC against KXIP.

2013: This year saw more than one hat-trick after four years and the feat was achieved by KKR’s Narine and Mishra, who bowled for SRH this time.

2014: Both the hat-tricks of this year were made by RR bowlers; Tambe against KKR and Watson against SRH.

2017: This year saw as many as three hat-tricks accomplished in one edition, something for the first time since 2009. The three bowlers who made the feat were Samuel Badree (RCB), Andrew Tye (GL) and Jaydev Unadkat (RPS). 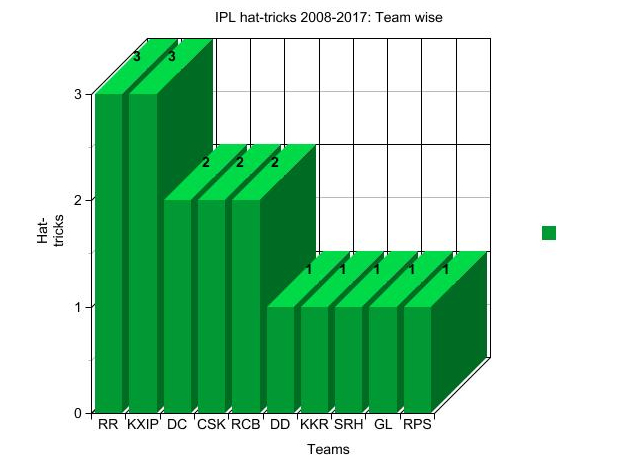 Most dot balls bowled in IPL:

The IPL is known to be all about the batsman’s banging the ball, but there have been bowlers in the tournament who delivered wisely and skilfully to peg the murderous batsmen back. Here, we take a look at the top five bowlers who bowled the maximum number of dot balls in an IPL match.

Lasith Malinga, who has the most number of wickets (154) in the IPL, is the second best in terms of bowling dot balls (1,060). Malinga, who remained unsold in the 2018 auction, bowled these dot balls in 110 innings which means 9.63 dot balls on an average.

Malinga’s one-time mate in MI Harbhajan Singh, who will play for CSK in 2018, is the third in the exclusive list with an equal number of dot balls (1,060) like the Sri Lankan fast bowler. Singh, however, has taken 133 innings for his feat (7.96 dot balls on average). The Turbanator has 127 wickets in the IPL.

Next in the list is South African Dale Steyn. The pacer, although remained unsold in auction for 2018 IPL, has bowled 978 dot ball in the tournament so far. The bowler, who last appeared for GL, has achieved the feat in 90 innings which means he has bowled 10.86 dot balls on an average, which is better than all the bowlers ahead of him. Steyn has 92 wickets in the IPL.

The fifth best bowler to have bowled the most number of dot balls is Amit Mishra, who last played for SRH but returned to his old team DD this year. Mishra has bowled 953 dot balls in 126 innings which makes it an average of 7.56. The wrist spinner has 134 wickets in all in the T20 tournament.

Most dot balls in IPL: Season-wise:

In 2008, RR’s Shane Watson gave the most number of dot balls (158) in 15 innings, which meant an average of 10.53 dot balls per innings. CSK’s Manpreet Gony and DD’s Glenn Mcgrath came close second and third with 154 and 153 dot balls, respectively.

In 2010, Steyn, playing for RCB then, did not allow a run in 164 deliveries in 15 innings (average of 10.93) that he bowled that year, finishing at the top of the table. His mate that season Anil Kumble was the second best with 151 dot balls while DC’s Pragyan Ojha was third with 133 dot balls.

In 2013, Steyn bagged the honours again by bowling 211 dot balls in 17 innings, averaging an impressive 12.41. He played for SRH in this edition. MI’s Mitchell Johnson finished second with 188 dot balls and Narine with 180 dot balls.

In 2016, SRH’s Bhuvneshwar Kumar bowled 156 dot balls in 17 innings to be the best. He bowled an average of 9.17 dot balls. His teammate Mustafizur Rahman from Bangladesh finished second with 137 dot balls and GL’s Praveen Kumar third with 132 dot balls. 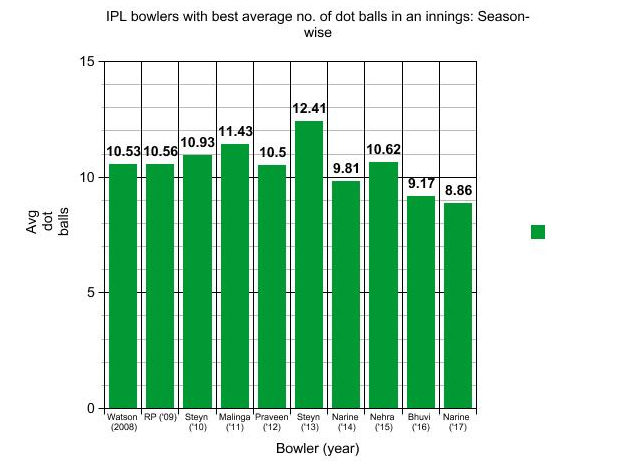 Most maiden overs in IPL:

Sandeep Sharma, who was bought by SRH this year, is ranked third with 8 maiden overs in 56 innings (0.14 on average) which is better than Malinga’s 8 maidens in 10 innings (0.07 on average). Dhawal Kulkarni, who will play for RR this year, has bowled 7 maiden overs along with Steyn but the former has a better rank owing to less number of innings played (72 to Steyn’s 90). Kulkarni’s average number of maiden over in an innings stands at 0.09 while that of Steyn is 0.07. 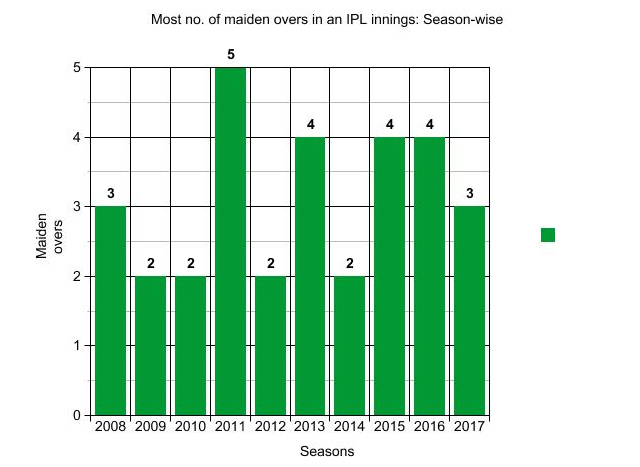 Most runs conceded in an innings:

Looking at the most expensive bowlers’ list in the IPL, Ishant Sharma has the dubious distinction of conceding the most runs in four overs in a game (none for 66 against CSK in 2013). Sharma went unsold in the 2018 auction.

Umesh Yadav, playing for DD, almost broke the record in the same edition as he conceded 65 runs in 4 overs without taking any wicket against RCB without getting any wicket.

Sandeep Sharma is the third in the list with the figure of 1 for 65 in 4 overs against SRH in 2014. Sharma was playing for KXIP in that edition.

In the fourth spot is Ashok Dinda, who in the 2013 season, conceded 63 runs in 4 overs against MI without any wicket.

Varun Aaron is the fifth most expensive bowler with the figures of 2 for 63 in 4 overs against CSK in 2012. Aaron, who also went unsold in 2018, played for DD in that game. 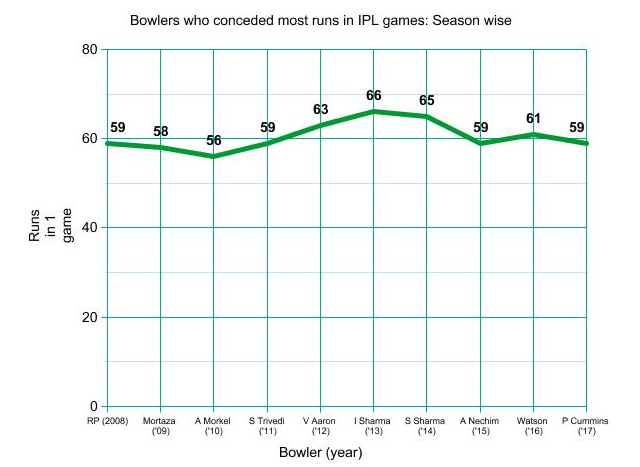