MS Dhoni: The story of a finisher who couldn't finish his cricketing tale

MS Dhoni: The story of a finisher who couldn’t finish his cricketing tale

Have you ever imagined your favorite web shows without a season finale? Like what if nobody knew the heir to the “The Iron Throne” at the end of Game of Thrones or the fate of Mumbai and Sartaj Singh at the end of Sacred Games? In such cases, you will get buried under the mysterious sailing stones and your anxiety will further compound your daily life problems.

It’s only because one always likes to see the conclusion of a story. Whether the story is fictional or real-life or the outcome is positive or negative every story needs a proper finish unless you are a fan of Stanley Kubrick’s films. And talking about classic finishes who can forget the name of MS Dhoni, an individual who is the monarch of the cricketing world when it comes to giving finishing touches to the cricketing tales.

Agreed that Dhoni will always be remembered for his remarkable achievements as the captain of the Indian team but his finishing skills alone makes him a legend of this game. Why? The answer lies in this question: how many times have you seen a player pull-off run-chases like him in the most trying circumstances? Such has been the impact of his game that it has played a huge role in changing the mindset of the Indian team and the current generation cricketers.

Dhoni’s finishing skills is a piece of fine art

Like the old saying “Rome wasn’t built in a day”, MS Dhoni also took time to create his legacy in the cricketing world. At first, he became the safe pair of hands for Sourav Ganguly’s men as the Bengal skipper wanted Rahul Dravid the batsman instead of the keeper-batsman. This meant that Dhoni batted at No.7 in his first few games which didn’t turn out be Christmas for him.

Hence it didn’t take long for the team management and skipper to tinker with his batting position. He was pushed up the order in the midst of a bilateral series against Pakistan and the result was the then highest ODI score (148) by a keeper-batsman in the Indian jersey. Thereafter he scratched off his own record when he hammered an unbeaten 183 against Sri Lanka and it is still the highest ODI score by a wicket-keeper in the international circuit.

However, seeing the bigger picture and being aware of his big-hitting skills, the team management decided to use Dhoni as a “finisher”, a term which hugely coincided with pinch-hitters in those days. An individual who can maintain a healthy strike rate at the fag end of an innings is the apt description of such players. It is a trade where the players don’t get the time to adjust to the pitch conditions and have to play high-risk shots for the cause of the team.

Though MS Dhoni didn’t hit the ground running in his new role he played his part with great panache. He often hit quick-fire half-centuries and assured the team of useful runs down the order. Slowly he got used to the role and then he came into his own in the 2007-08 Commonwealth Bank Tri-Series. Many might remember the series for the brilliance of Gautam Gambhir and Ishant Sharma but Dhoni’s finishing skills also helped the team register that historic series win.

Start of an era

Then started the era of MS Dhoni ” The finisher ” as he fused his power-game with his wisdom and turned into one of the most unique batting talents the game has ever seen. His presence in the final overs became a norm. Moreover, his ability to turn the tide in matter of overs made him the enchanting name in the cricketing spectrum. He wasn’t the perfect batsman from the Indian soil but he became the master of the craft which was hardly explored in white-ball cricket. 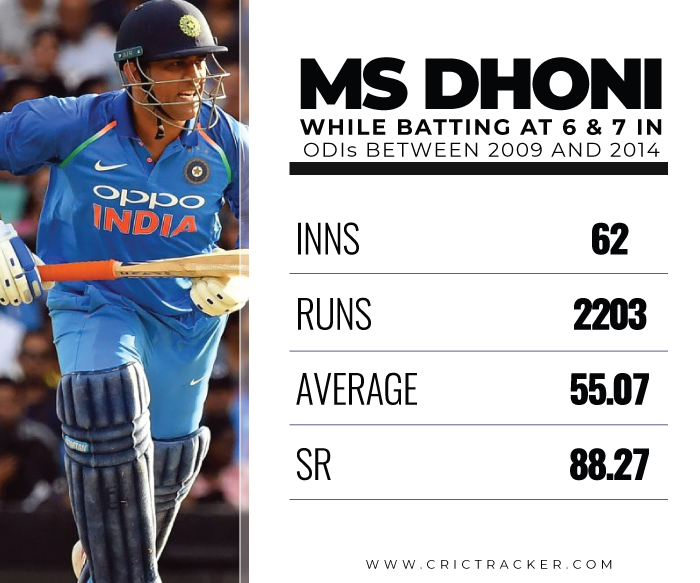 From his shoulder twitching to change of bats in the end-overs, everything looked like poetry in motion. Add to that his lightning-quick feet and his calm demeanour, which completed the symphony of one of a kind. Sometimes even the supreme beings conspired to make him look like a hero. Soon his finishing skills popularized as a piece of fine art equivalent to ” Mona Lisa at Louvre “.

The World-Cup winning knock of 91* at Wankhede comes first to the mind. To name a couple more, the Adelaide 2012 and Port of Spain 2013 where he dramatically finished the game in the last over also holds a special place in the cricket folklore. During these times even in the IPL, he showcased his skillset on numerous occasions.

When the tide started turning

Alas! Dhoni’s clock started ticking backwards as the opposition tickled his needles. At first, the spinners started to slow him down with their fuller lengths which used to be his strength in his early days. Thereafter, the quicks followed with a barrage of wide half-volleys and sharp bouncers and suddenly Dhoni looked out of his depth.

Notably, his same ole pattern of taking the game to the wire also began to backfire. Besides his overcautious approach at the start of his innings didn’t help either. He huffed and puffed in most of his outings and it seemed age caught up with him. Even the absence of a quality middle-order compounded his misery.

Furthermore, his ability to assess the situations got worse as he couldn’t finish the game as he usually did. The numbers also took a hit. Though it isn’t a steep fall it happened at a time when the strike rates and averages were traversing an upward curve in the limited-overs cricket. In all, Captain Cool lost his grip on the craft which made him the icon of this game. 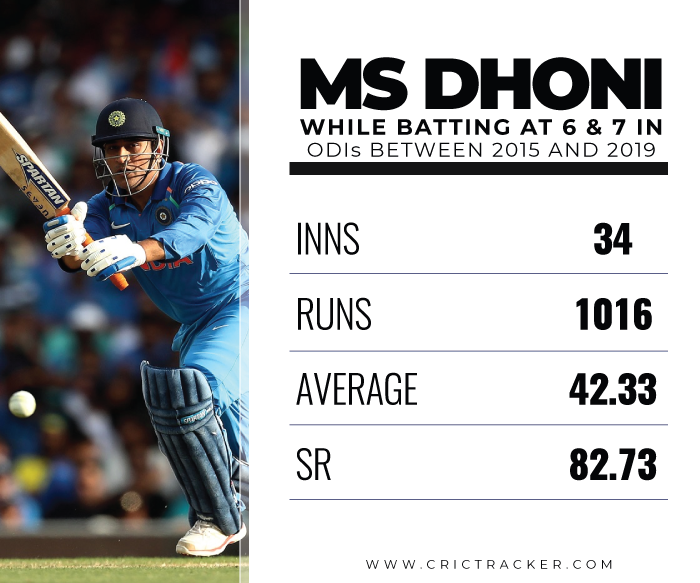 In the end, Dhoni should be mighty proud of his heroics in the national jersey. His finishing skills is a story that has charmed millions around the world and will also be cherished in the times to come. But the question is has he finished his story yet? He hasn’t announced his retirement and has kept the fans guessing in the last 10 months. So now if the IPL is also cancelled which was supposed to be his comeback opportunity then the cricket’s greatest ever story might end with the final episode missing.