Last year, the Blitz defeated the Stars by 62 runs at the Wanderers.

The second edition of the Mzansi Super League (MSL) is scheduled to get underway on Friday, November 11. The opening match is a re-match of last season’s final between the Cape Town Blitz and Jozi Stars. The encounter will be played at the renowned New Wanderers Stadium in Johannesburg. The Stars are the defending champions after beating the Blitz by eight wickets.

In fact, the Stars have a 2-1 lead over the Blitz on head to head count. But at the venue for the first encounter, the Blitz defeated the Stars by 62 runs. Both sides won six of their 10 league matches, but Cape Town managed to make a direct entry into the final as they finished atop the points table. The Stars were lucky to get to the final after the Qualifier 2 versus Paarl Rocks was abandoned.

The tracks in Johannesburg in the last MSL was fairly good for batting. But on most occasions, the team, batting second had to face troubles, losing by 62, 53 and 101 runs in three of the five matches. Both sides have some quality bowlers and won’t mind defending targets. The conditions will be cloudy, but with no chances of rain. The temperature will be around 26 degrees Celsius.

The top three in the Stars batting has to score the chunk of the job. On their day, all three of Chris Gayle, Reeza Hendricks and Rassie van der Dussen can rip the best of bowling attacks apart. Daniel Christian can be used as a flexible option, keeping in mind his big-hitting prowess. Kagiso Rabada will led the seam attack with Duanne Olivier. Simon Harmer has to bring in all his experience into play.

Moeen Ali’s inclusion has boosted the Blitz’ batting to a large extent. Quinton de Kock and Liam Livingstone should be opening the batting. Janneman Malan got a national call-up after the previous edition of the T20 league. Lower down the order, they also have Nawaz, who’s also more than useful with the ball. Philander, Steyn and Nortje are the fast bowlers. Linde will also play a key role. 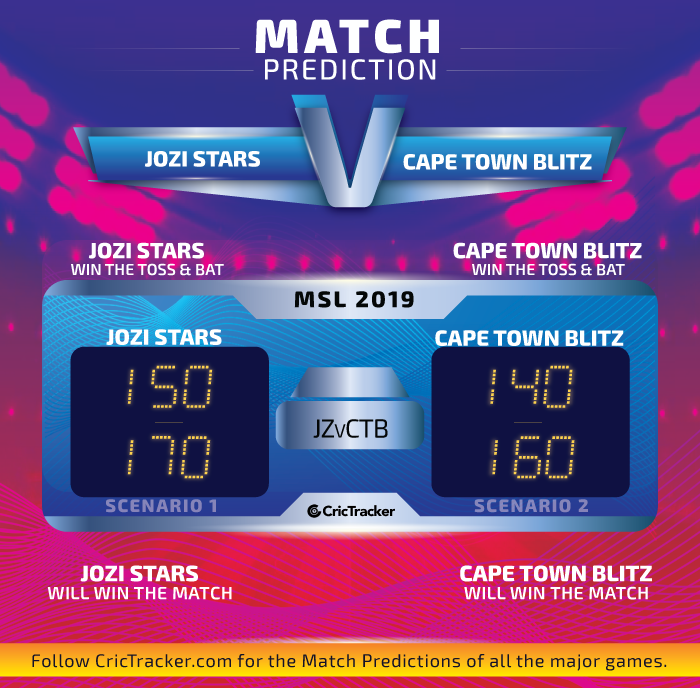