Can the Heat open their account in MSL 2019 against the table-toppers?

The Nelson Mandela Bay Giants are on a bit of a role in the 2019 edition of the Mzansi Super League (MSL). Having won three out of their four matches, the other being washed off, JJ Smuts and Co are sitting pretty on top of the points table. In their previous encounter, the Giants dethroned the Cape Town Blitz from the top, beating them by five wickets at the St George’s Park in Port Elizabeth.

In fact, the Giants have won both matches and home where they next play the Durban Heat. The Dale Vilas-captained Heat have been on the unlucky side with three of their four games ending in washouts. With six points from four matches, the Heat are placed fifth on the points table and have plenty of work to do to climb the ladder. Topping the Giants won’t be an easy for task for them.

The conditions will mostly be sunny with no chances of rain. The temperature will be around the 22 degrees Celsius with the humidity in the 60s. The pitch has been an excellent one for batting with batsmen, being able to play shots on the up. In the last game, 187 was chased down without much fuss and it shows the true nature of the surface. Batting second should be the way forward.

Skipper JJ Smuts has led from the front, being their top run-scorer with 105 runs at 52.50. The others have chipped in. Marco Marais stayed unbeaten on 40 against the Blitz and may get a promotion. The likes of Jason Roy and Heino Kuhn are in decent form. Junior Dala is their leading wicket-taker with eight scalps. He has gotten excellent support from the experienced duo of Morris and Tahir.

The Heat needs to sort out their batting going into the second half of the tournament. Wihan Lubbe scored 83 runs versus the Blitz. The likes of Alex Hales, David Miller and Ravi Bopara have to step up and deliver. The onus will also be on Dane Vilas to guide the team. In bowling, Phehlukwayo, Kyle Abbott and Keshav Maharaj will play a key role. They will need support from Siboto and Jansen. 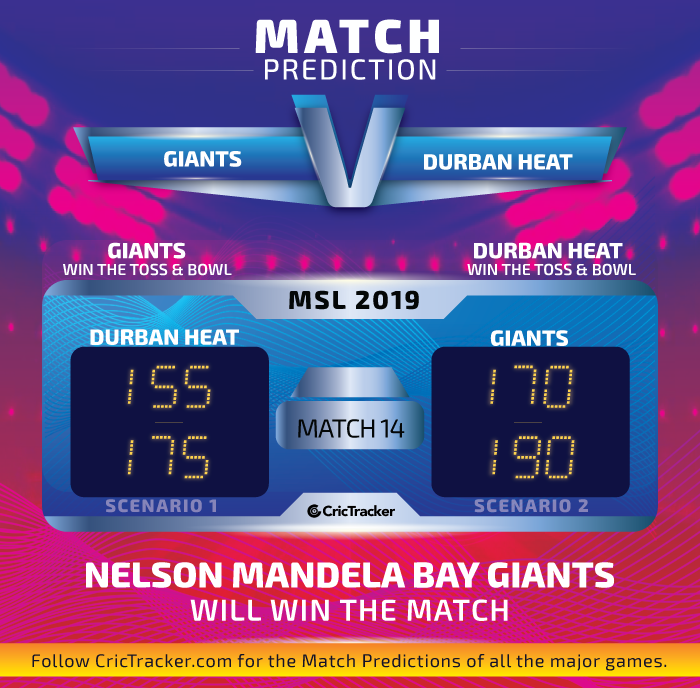