Durban Heat is expected to win their first game in MSL 2019.

The 18th Match of Mzansi Super League 2019 will be played between the Cape Town Blitz and Durban Heat at Newlands in Cape Town.

Durban Heat has not got off to a great start to their season in MSL 2019. After playing five games they are still due to taste their first win. Three out of their five games got abandoned due to rain and would be eager to get back on winning track before getting ruled out from the semi-final race.

The heat will have to come up with some stronger team effort in the upcoming game. With the likes of David Miller, Alex Hales and Dane Villas they boast some strong batting line up in the tournament, who can help their side to outclass Cape Town Blitz. Blitz has won three games until now in the tournament and will look to carry on with their convincing performance.

In batting, they have Janneman Malan, who looks in good touch with the bat. He has amassed 187 runs in six games with a best of 99*. They also have Quinton de Kock as their skipper that makes their batting line up look more strong. In bowling, they have Dale Steyn who is currently the leading wicket-taker in the tournament. He has grabbed as many as 10 wickets in six matches.

It will be a sunny day with plenty of sun and no chances of rain. The temperature is expected to deviate between 30 and 33 Degree Celsius according to Accuweather.

The track at Newlands is expected to go in favour of the batsmen that will help them to pile some big runs. However, the bowlers are expected to get less assistance from the wicket. The pacers will have to hit in the right areas to get wickets during the game. 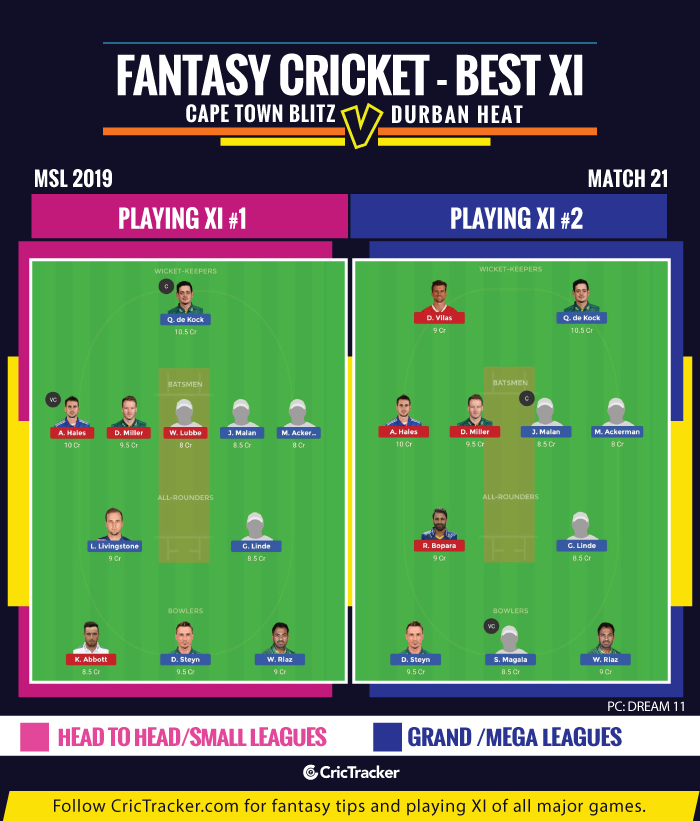 David Miller has not given any breakthrough performance in MSL 2019. He holds a calibre to play a big knock. He would be eager to regain momentum in the upcoming match. However, his form makes him a risky pick but he will be a player worth for any Grand League side.

Durban Heat is expected to be winners against Cape Town Blitz.