The pitch at the SuperSport Park generally helps the fast bowlers to a large extent.

The Tshwane Spartans have a couple of points in their tally in the 2019 edition of the Mzansi Super League (MSL). But it was because of their abandoned match against the Durban Heat at the Kingsmead. In the second encounter of the T20 league, the Spartans, captained by Heinrich Klaasen, are scheduled to lock horns with the Nelson Mandela Bay Giants at the SuperSport in Centurion.

The Giants have made a stupendous start, beating the defending champions Jozi Stars by 24 runs at the St George’s Park in Port Elizabeth. The Giants and the Spartans had similar campaigns last time around, having won four out of 10 games. On head to head count, both teams lost their home games against each other. The Giants are in firm and the Spartans have to put forth their A-game.

The average score of in the last five T20Is says that a fairly high-scoring game is in store. The pitch generally assists the pacers and both sides have some quality speedsters in their ranks. There are chances of rain which could play spoilsport. From 7 PM to 9 PM, the percentage is on the higher side. The temperature will start at 22 but will come down to 16 degrees by the end of the game.

The Spartans have a bowling heavy unit, especially in the pace department. Lutho Sipamla, Tom Curran and Morne Morkel form a lethal trio. Waqar Salamkheil adds the X-factor, being a chinaman. He will partner Roelf of van der Merwe in the spin department. AB de Villiers and Heinrich Klaasen will hold the key with the bat. The likes of Elgar and De Bruyn have experience on their side.

Jason Roy missed out the last time and he’ll look to make amends. Skipper JJ Smuts also needs some runs under his belt. Matthew Breetzke was effective in the powerplay. Heino Kuhn and Farhaan Behardien are in excellent touch as well. In bowling, Chris Morris, Junior Dala and Imran Tahir are amongst the wickets as well. Even left-arm pacer Nandre Burger did an excellent job with the ball. 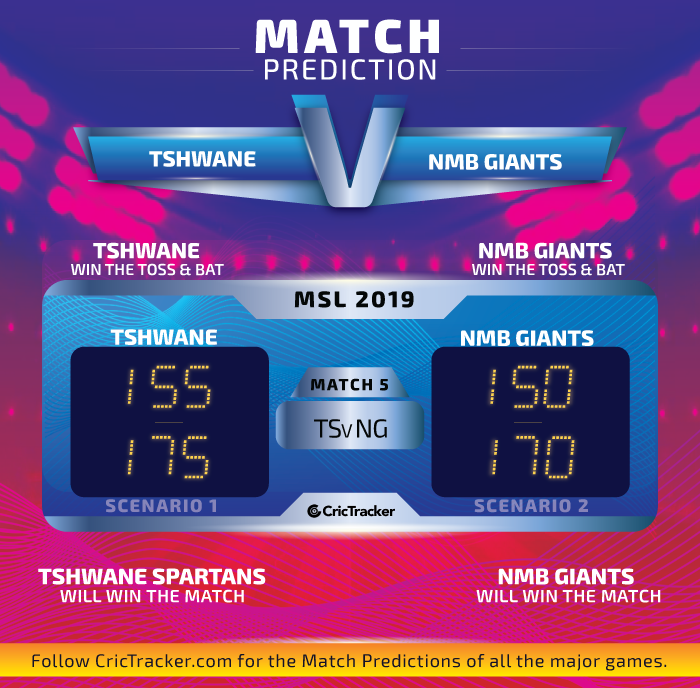