George Linde has been an unsung hero for his team. He has picked wickets every time after coming on to bowl and can be made vice-captain of your Dream11 Fantasy team.

The 6th match of the Mzansi Super League (MSL) 2019 will be played between Cape Town Blitz and Jozi Stars at Newlands in Cape Town.

The Cape Town Blitz and Jozi Stars will face-off for the second time within a week in the ongoing MSL 2019. The defending champions have got off to a worst possible start to their season losing two matches so far. They lost to Blitz in the opening game of the season by 15 runs and then went down to the Nelson Mandela Bay Giants by 24 runs. The Stars should soon start winning the games as the tournament moves forward very fast.

Quinton de Kock-led Cape Town Blitz, on the other hand, won the season opener but went down by a massive 86 runs against the Paarl Rocks. None of their batsmen could pose a threat to the opposition and would want to come back strongly. The fact that they beat the Jozi Stars in the previous face-off should keep them in good stead ahead of this game.

The weather in Cape Town is excellent for a cricket game to take place. The sun will be out when the two teams will take the field and the temperature is expected to hover around 18-20 Degrees Celsius according to AccuWeather. There is no chance of rain in the city at all.

The surface at Newlands is known to keep everyone interested over the course of 40 overs. Historically, it has favoured the teams bowling first and the trend is expected to continue for this game and the season as well. Expect the team winning the toss to opt to chase.

Asif Ali is expected to play this as the T20I series against Australia concluded recently. Same is the case with Wahab Riaz.

Moeen Ali was signed to play only two matches of the season and he won’t be available further.

Quinton de Kock has got off to a poor start to this MSL season. But he is expected to hit the straps sooner rather than later and should be picked in your Dream11 Fantasy team. Janneman Malan is also a must given his recent exploits in the season opener. With the ball, Dale Steyn and Anrich Nortje are doing the job for the Blitz.

For the Jozi Stars, Reeza Hendricks is an integral part even as Chris Gayle is struggling to find some much-needed form. The Universe Boss could be picked at your own risk as he can play a big knock on any given day. In the bowling department, Kagiso Rabada and Aaron Phangiso should be decent options. 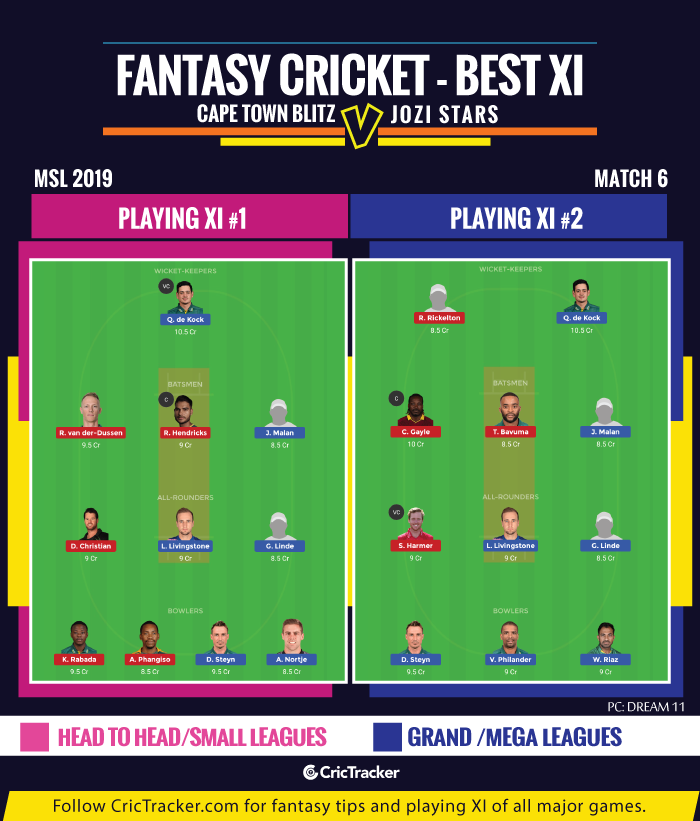 George Linde has been an unsung hero for his team. He has picked wickets every time after coming on to bowl and can be made vice-captain of your Dream11 Fantasy team.

Again Chris Gayle is an extremely risk pick but he will play one big knock on any given day. He could be made the captain of your team in Grand Leagues.

Jozi Stars are expected to win this match.