Alex Hales can be quite unpredictable with his performances at times. Thus, rather than picking him in both your Dream11 Fantasy teams, go with David Miller in one of the teams since he is an equally destructive player.

The 7th match of the Mzansi Super League (MSL) 2019 will be played between Durban Heat and Paarl Rocks at Kingsmead in Durban.

Durban Heat’s opening match of the tournament against the Tshwane Spartans was washed out due to rain. Thus, they had to share the points and are currently placed in the bottom half of the points table. However, they’d want to change their current standing by adding four points when they host the Paarl Rocks. Having finished last on the table last year, they should look to turn things around.

The Paarl Rocks had a terrific start to the tournament. By defeating the defending champions Cape Town Blitz by a massive 86-run margin in their last game, they even managed to get a bonus point. However, they will be tested against a quality opposition playing away from home. While they’d want to carry forward the winning momentum, they shouldn’t get over complacent after that fabulous victory and must put in their best efforts. It should be a great game if both these sides fire in all cylinders.

It is bad news as heavy rains are predicted in Durban throughout the duration of this game. As it was in the first game, it shouldn’t be a wonder in case this game gets washed out.

The Kingsmead pitch isn’t the easiest one for the batsmen. Over the years, it has changed its character and has offered great support to the bowlers in recent times. With the weather as it is predicted to be, it there is play possible, the fast bowlers will enjoy their time. Chasing is a better option here.

JP Duminy is ruled out of the tournament.

James Vince could be available for Paarl Rocks for this match.

Dane Vilas should be your first choice wicket-keeper for both your Dream11 Fantasy teams. Faf du Plessis, Cameron Delport and Henry Davids are the top picks with the bat. Amongst the all-rounders, you must have the likes of Andile Phehlukwayo and Dwaine Pretorius. Kyle Abbott should be picked in your team. 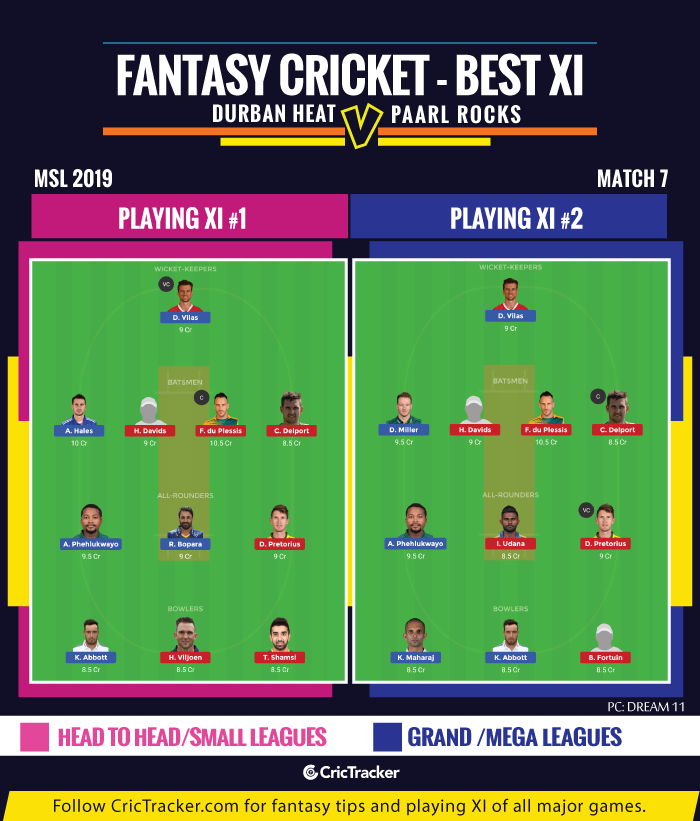 Alex Hales can be quite unpredictable with his performances at times. Thus, rather than picking him in both your Dream11 Fantasy teams, go with David Miller in one of the teams since he is an equally destructive player.

Paarl Rocks are expected to win this encounter.