Port Elizabeth is set to host its first match.

Both Nelson Mandela Bay Giants and Durban Heat are hanging midway in the points table of the ongoing Mzansi Super League. The Giants started the event with a victory against Jozi Stars, but couldn’t go past the finishing line against Cape Town Blitz. Moreover, luck also didn’t favour them by any means as the floodlights went off and the Giants were allowed to play only 16 overs.

On the contrary, the Heat didn’t have the best of starts in the event after losing to the Blitz by three wickets. However, they made a strong statement against Tshwane Spartans at Kingsmead in Durban. Another defeat for any of the two teams is expected to put them in deep water. The encounter would be played at St George’s Park in Port Elizabeth and the venue will also host its first match.

The pitches in the T20 event have been fairly good for batting, but have tended to get worse as the matches have progressed. Out of the seven matches, only two have been won by the team batting second. Hence, it won’t spring a surprise if the teams opt to bat first after winning the toss. Bowlers are bound to get rewarded if they are ready to bend their back.

Marco Marais and Jonathan Smuts are the opening batsmen with the likes of Ben Duckett and Christiaan Jonker to follow. Christian Jonker, Chris Morris and Ryan McLaren are no mugs with the bat in hand. Morris and McLaren can also crank up the pace with the ball in hand. Junior Dala is the other fast bowler. Imran Tahir and left-armer Aaron Phangiso are the spin bowling options.

The experienced duo of Hashim Amla and Morne van Wyk are the opening batsmen. Heinrich Klaasen and David Miller are the men in the middle order. Khaya Zondo and Albie Morkel are the other batters. Vendon Philander and Keshav Maharaj aren’t the worst with the bat. Morkel, Maharaj and Philander are also useful bowlers. De Lange, Abbott and Bokado are the other bowlers. 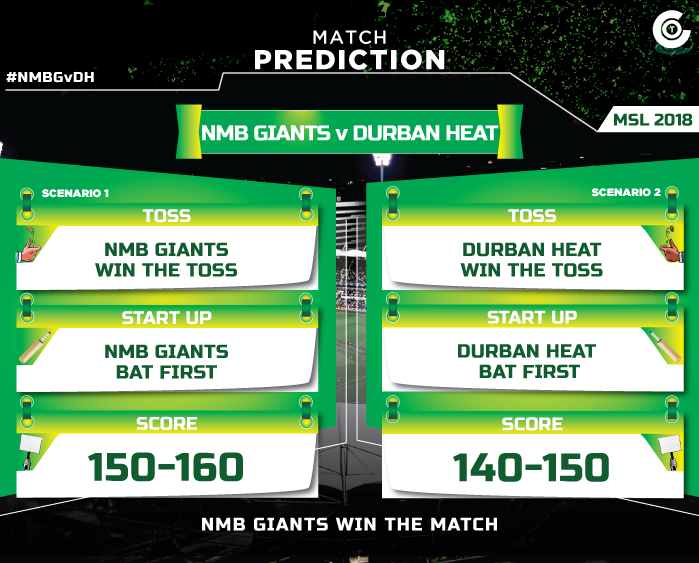