Both Qalandars and Sultans are yet to play a final in the history of the championship.

Out of the four teams, taking part in the 2020 Pakistan Super League (PSL) playoffs, Peshawar Zalmi were knocked out after their defeat to the Lahore Qalandars in the Eliminator 1.

The Qalandars, meanwhile, on the back of Mohammad Hafeez’s 46-ball 74, made their way through to the Eliminator 2 on Sunday where they will be up against Multan Sultans, captained by Shan Masood.

The match will take place at the National Stadium in Karachi and it’s a golden chance for the Qalandars to make their maiden final after ending as the cellar dwellers in the previous editions.

As far as the Sultans are concerned, they lost the Qualifier to the Karachi Kings after the match went right down to the Super Over. They have a strong unit and would be desperate to make amends.

The pitch in Karachi has favoured the batting team to quite some extent. The pacers have also generated bounce from the surface. But the dew factor has played a role as well, making it tough for the fielding team.

Therefore, batting second should be the way forward for the teams. The temperature at night will be around 25 degrees Celsius. The humidity will mostly be in the mid-30s.

Playing Combinations for MUL vs LAH

Shan Masood was arguably the standout batsman for the Sultans in the league stage. He notched 256 runs at an average and strike-rate of 28.44 and 128.64 respectively. But he couldn’t perform in the Qualifier, managing only three runs off two balls.

He was unlucky to some extent as he was run out at the non-striker’s end. The left-hander will be looking to come up with a match-winning knock.

Tamim Iqbal is a fearsome striker of the cricket ball. That he nearly has 5,800 runs in the shortest format is a testament to his class and potential. Even in the Eliminator 1, the Bangladesh stalwart got off to a flying start, scoring 18 runs with two fours and one six.

Saqib Mahmood accounted for his wicket with a bouncer. But it’s hard to keep a batsman’s of Tamim’s calibre quiet and he will look to deliver.

MUL vs LAH Head to Head

The prediction is for Multan Sultans to win the match. 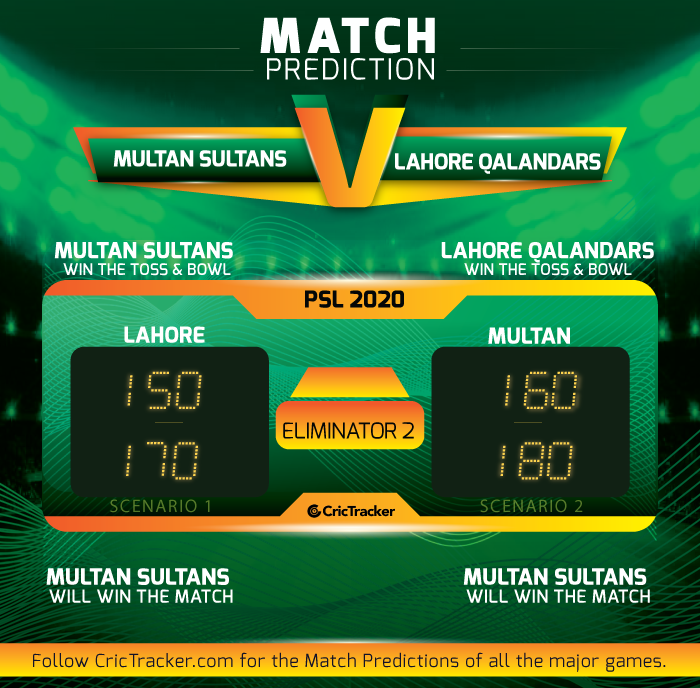