Kamran Akmal is back to his best and expected to continue the same form. 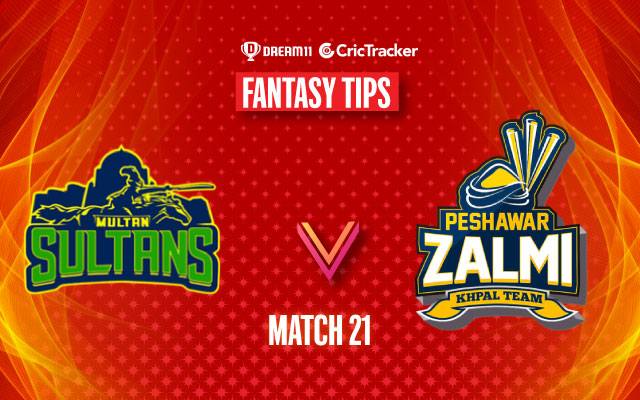 Multan Sultans will be up against the Peshawar Zalmi in the 21st match of the tournament. Multan Sultans had a good last game where they beat Karachi Kings by 12 runs. It was the second win for them in this tournament. Currently, they are still placed at the 5th spot in the standings with 4 points.

Having lost their first match in the second leg of the tournament, Peshawar Zalmi then won their next game quite convincingly against the out-of-form Quetta Gladiators by 61 runs. Half-centuries from David Miller and Kamran Akmal helped them in the winning cause.

The surface is getting better and better for the batters to score runs freely. Having said that, there is still pace in the wicket where quick bowlers can utilize it. Batting first is a good choice.

Rilee Rossouw was the player of the match in the last game against the Karachi Kings. He scored 44 runs from just 24 balls. Overall in this year’s league, he has notched 94 runs at an average of 23.5.

David Miller stole the show in the last game against the Quetta Gladiators with his exceptional hitting, where he scored 73 runs from 46 balls. In 2 matches, he has scored 94 runs at a strike rate of 136.23.

Rovman Powell showed what he is capable of with his six-hitting abilities in the previous match against the Quetta Gladiators, scoring unbeaten 43 runs from 19 balls, which includes one four and 5 sixes.

Imran Tahir is an economical bowler for Multan Sultans in this competition. He has picked up 4 wickets in 2 matches at an economy of 7.

Wahab Riaz is a must pick for your fantasy teams. He is regularly picking wickets, which is a good sign for his side. Overall in this tournament, he has scalped 11 wickets in 6 matches at an economy of 8.45.

Mohammad Rizwan is the second-highest run-scorer in this league. He has mustered 326 runs in 6 matches at an average of 54.33 and a strike of 138.72, which includes 3 half-centuries.

Khushdil Shah has contributed well so far with both and ball, scoring 82 runs in 5 innings and even picked up a wicket. Considering his decent performances, he is a risky captaincy option.

Wahab Riaz is leading the side really well and he is also picking wickets at regular intervals. You can take a risk in picking him as your fantasy team skipper.

Sohail Khan has picked up 2 wickets in 4 matches at an economy of 8.71. Since there is too much competition, it’s hard to pick him in the bowler’s category and you can avoid him while making your fantasy teams.