Karan KC has picked 4-wicket hauls in both matches in this tournament.

The 4th game of the 2020 Nepal Tri-Nation ODI Series part of the ICC Men’s Cricket World Cup League 2 will be played between Nepal and Oman at the Tribhuvan University International Cricket Ground in Kirtipur.

With six wins from eight matches in the CWC League 2, the Oman team continue to grow as a superpower among the associate nations. Their ability to pull off matches from dire situations has proved their character. They began the Nepal Tri-nation ODI series with back to back victories. They will face the hosts Nepal on Sunday in their 3rd fixture. The Nepal team’s home ODI debut ended in an 18-run defeat against Oman but they soon bounced back with a 35-run win over the USA to register their maiden home ODI victory. The 15-year-old Kushal Malla was star in the Saturday’s match where he scored a 50 on his ODI debut after coming in for injured Sharad Vesawkar.

The University Ground in Kirtipur is expected to quite cold on Sunday but we are unlikely to see any interruptions.

The pitches at the Kirtipur’s University Ground have been quite tough to bat on throughout the duration of the match. Both the matches involving Nepal have witnessed the team batting first winning despite sub-200 totals. This trend is likely to continue on Sunday when Nepal takes on the Oman team.

In his debut game, Kushal Malla showed promise of being a solid all-rounder. He scored a near run-a-ball fifty and also picked up a wicket bowling 10 overs. He is likely to have a major impact in the match against Oman. Muhammad Nadeem has been in some form in this tournament as he scored unbeaten fifties in both matches that too during critical stages. He also picked up four wickets across the two matches including a 3-fer. Karan KC has been Nepal’s go-to bowler in this competition having picked 4-wicket hauls in both matches. He has aggregated 12 runs across these two matches but is capable of doing better. 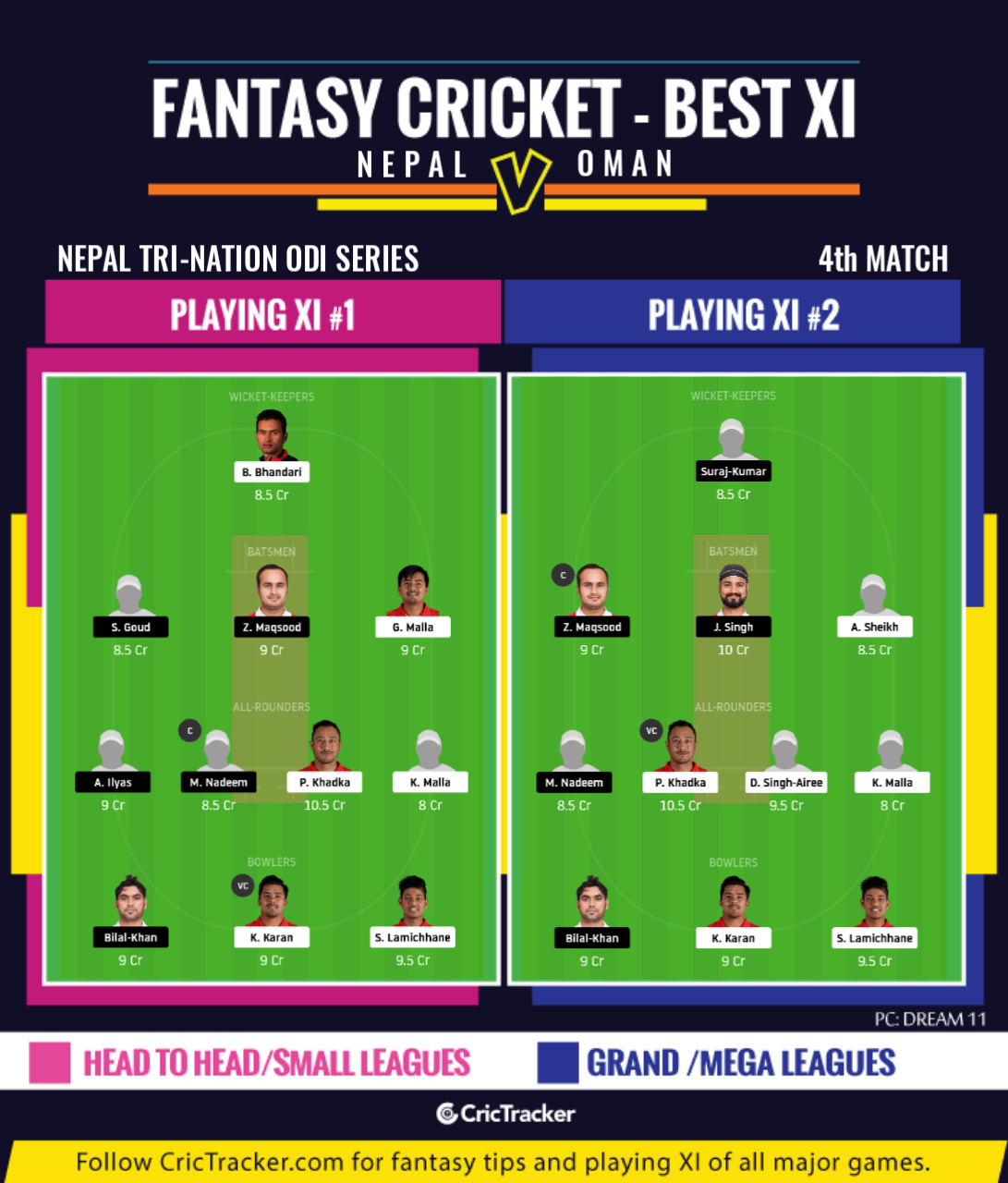 Considering how the pitches played in the first three matches of this Tri-series, it is difficult to pick players who add value with the only bat. In the present scenario, Paras Khadka becomes the riskiest pick. However, he is too good a player to be ignored and we decided to trust him in both teams. Aqib Ilyas and Khawar Ali are ideal alternatives for Paras.

Nepal is expected to hand Oman their first defeat of the tournament.