Shamim Hossain took two wickets in his first over of the series.

The 2nd match of the 5-match Youth ODI series between New Zealand Under-19s and Bangladesh Under-19s will be played at the Bert Sutcliffe Oval in Lincoln.

Bangladesh Under-19s started their tour of New Zealand on high as they registered a big win in the warm-up match and later took 1-0 lead in the 5-match Youth ODI series. Bangladesh posted a huge score of 388/7 in the warm-up against Canterbury Invitational XI. The home side were restricted to 197/7 in process of their 344-run chase from 45 overs.

Later in the first ODI, the Bangladesh pacers ensured that the New Zealand Under-19s were restricted to just 176. Keeper Ben Pomare’s 40 was the highest individual score for the hosts in that match. Bangladesh was four down for 99 runs but their skipper Akbar Ali ensured there was no more fall of wickets. He scored an unbeaten 61-ball 65 to take his side home.

Rain is expected to be seen during Wednesday morning at the Bert Sutcliffe Oval. The weather forecast suggests some sort of rain at the venue till 12 PM local time. If the expected weather comes true, we might have a 35 overs aside match.

The Bert Sutcliffe Oval usually witnesses the sides batting first scoring 250+. However, on Sunday, there was bit of help for the pacers that helped pacers to strike with the new ball. Teams often prefer to bat second here due to the ground conditions being ideal for chasing. The help for the pacers in the morning will also be a reason for bowling first from now on.

Conor Ansell and Thomas Zohrab have put on impressive performances in U19 and U17 domestic tournaments. They got a decent start in the first game but failed to convert it. Mrittunjoy Chowdhury and Shoriful Islam have good records in Youth ODIs and started the series with three wickets apiece.

Shamim Hossain will be a safe option as vice-captain as he picked up two wickets in the previous game and can contribute with the bat if he gets a chance. 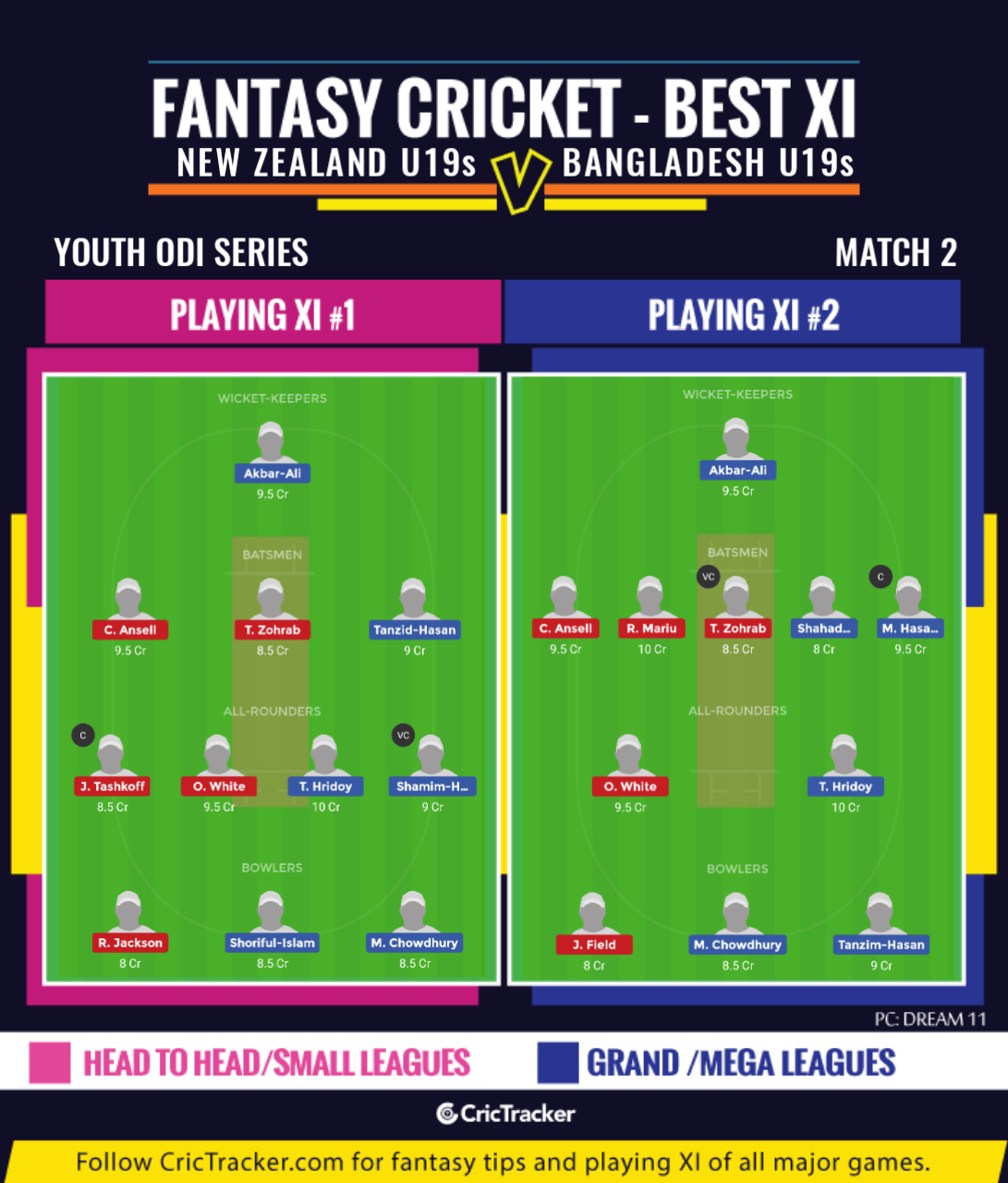 There was no update of the toss during the first match this makes predicting the playing XIs crucial. Bangladesh fielded their core group and are unlikely to make changes before one more win. New Zealand Under-19s selected 18 players for this series as a development squad for the upcoming U19s World Cup. Their debacle in the first ODI could lead to a couple of change to the lower-order and bowling all-rounders.

Bangladesh Under-19s are expected to go 2-0 up in this series.