Will Bangladesh at least put up a fight in the dead rubber?

It has been sheer domination by New Zealand in the first two games of the three-match ODI series against Bangladesh. Courtesy of the twin centuries from Martin Guptill, the hosts won both these matches by 8 wickets and have already clinched the series. The third and the final game of the series will just be a mere formality and the Kiwis will look to stamp their authority yet again.

New Zealand will aim for nothing less than a clean sweep when they face Bangladesh on 20th February. The visitors’ batting has come under severe scrutiny in this series with them being bundled out for less than 250 on both instances. Neither the bowling has come good and there are several question marks, injury woes for them heading into this game. Nevertheless, they will surely look forward to registering a consolation win.

It could be a batting-friendly track at the University Oval in Dunedin. A game is being played over here nearly after a year. It was a high-scoring one on that instance when the Blackcaps met the Brits. Three centuries were scored in the match and Ross Taylor registered his career-best of 181*. 335 was chased down by the hosts in 45 overs in that match.

Even though there will be some rain in the morning, bright sunshine is predicted when the game starts and it will be cloudy in the afternoon.

Kane Williamson is rested for the last game of the series. Thus, Tom Latham will lead the side. In Williamson’s place, Colin Munro will join the squad and will open the innings with Martin Guptill. This chance is a do-or-die one for the left-hander and he must do well to fancy a spot in the World Cup squad.

The batting coach has already confirmed that Henry Nicholls will bat at number three. A choice has to be made between Todd Astle and Mitchell Santer. The southpaw could make a comeback for this game. Also, the Kiwis might prefer resting Trent Boult and bringing in Tim Southee.

Bangladesh has got some injury concerns ahead of this dead rubber. Mohammad Mithun is ruled out due to a hamstring injury. Moreover, Mushfiqur Rahim is reported to have a recurrence of his rib-cage injury. A final decision will be taken on the game day. If he isn’t available, Bangladesh should go with an additional bowler and Liton Das will keep the wickets.

New Zealand is expected to clean sweep Bangladesh in the series. 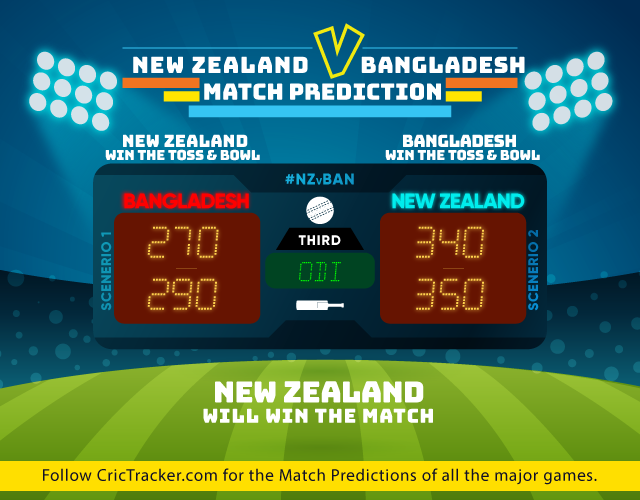 Get the latest Cricket News and updates from New Zealand vs Bangladesh series, Match Predictions, Fantasy Cricket Tips and lots more on CricTracker.com.