If Tom Banton is playing, then he could be made the captain in Grand Leagues.

The 1st T20I of the five-match series between New Zealand and England will be played at the Hagley Oval in Christchurch.

England and New Zealand will lock horns in the first of the five-match series on Friday in Christchurch. This is also England’s first limited-overs assignment after winning the World Cup at home earlier in the year. New Zealand, on the other hand, were at the receiving end of that controversial final, the winner of which was decided on the basis of boundary count.

Both the teams look on par in terms of hitting at the start of the series but the hosts are without their regular skipper Kane Williamson. England, however, played two practice matches in the lead up to the main contest winning the first and losing the other one. They have rested some of the top players for this series which presents a great opportunity for the fringe players picked on the back of the performances in the T20 Blast.

A little bit of rain is around in Christchurch in the lead up to the series opener. It will be cloudy for the whole day with the heavens likely to open up in the morning. However, there is no chance of rain coming down during the match while the dark clouds will continue to hover over the stadium. The temperature will hover around 14-15 Degrees Celsius according to AccuWeather.

This is the first time, the Hagley Oval has been allotted a host a T20 International. There is no idea about how the pitch will behave. But with this being the start of the blockbuster home season, expect the surface to be a good one for the batsmen. The dark clouds might help the fast bowlers for the first few overs but with short boundaries, the batsmen should enjoy their stay in the middle.

England has confirmed T20I debuts for Patrick Brown and Sam Curran. Tom Banton is not expected to play and Dawid Malan is likely to open in that case.

Joe Denly has been ruled out of the first T20I after rolling his ankle while fielding practice. Lewis Gregory is likely to replace him.

Jonny Bairstow is in exceptional form in white-ball form and he showed it in the first practice match scoring an unbeaten 78 in a steep chase. Eoin Morgan will also be a crucial pick while Chris Jordan and Adil Rashid can make an impact with the ball. These players should be picked in your Dream11 Fantasy team.

For New Zealand, Colin Munro and Tim Seifert will be likeliest performers. Guptill can also be an option but to pick him, with others you will have to manage credits. Ross Taylor is also important for the home team while Lockie Ferguson is a must in the bowling department. 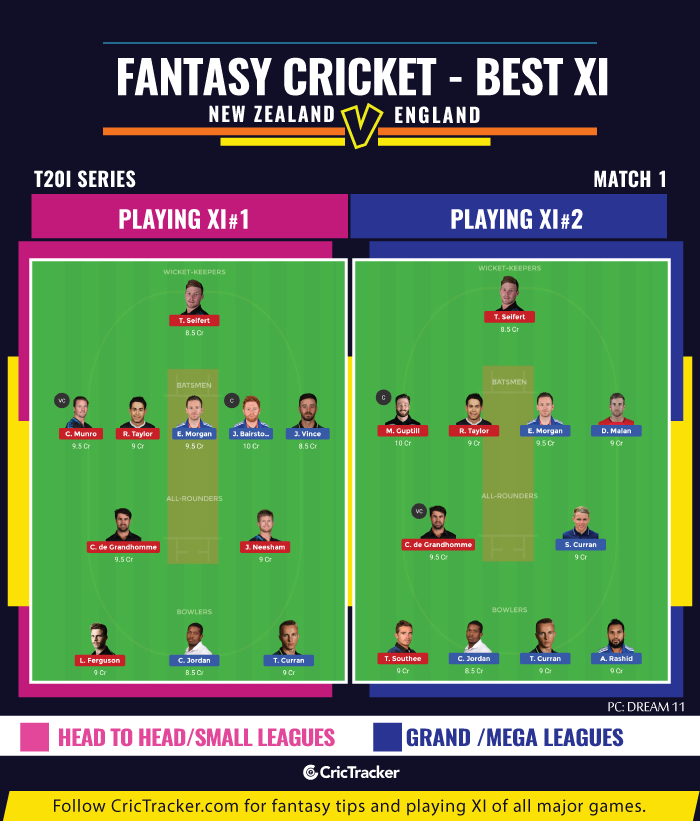 There is uncertainty around England’s playing XI as to who will play. So it would be wise to finalise your Dream11 Fantasy after the toss.

If Tom Banton is playing, then he could be made the captain in Grand Leagues.

Prefer picking more batsmen in your team as the pitch might be flat and with short boundaries on offer, runs should galore. Sam Curran can also be made VC if he is playing. But again, you will have to leave out a big player with 9-9.5 credits to make way for him.

It should be a close game but expect New Zealand to edge out England in a thriller.