In the last ODI at this ground, India were bundled out for mere 92 runs in the first innings.

The first of the three-match ODI series between New Zealand and India will be played on 05 February at Seddon Park in Hamilton.

India whitewashed the five-match T20I series against New Zealand and will be high on confidence. However, there are a few negatives for the Indian side as far as the first ODI is concerned. The last ODI game between the two teams – World Cup 2019 semi-final turned out to be a heart-break for the Indian fans. At the game venue, India have won just three out of ten matches. And, the Men in Blue lost their last ODI in Hamilton – the only defeat for India in their previous ODI series in the Kiwi land.

Whilst India have an extremely poor record at Seddon Park, the BlackCaps boast of an excellent record. They have played 29 One-Day Internationals at this ground and tasted victory in twenty of them. With Kane Williamson being ruled out, Ross Taylor will have the main responsibility to score runs. Also, the likes of Trent Boult and Lockie Ferguson won’t feature in this ODI leg, and that’s a big concern for them.

The third T20I was played at the same ground and the pitch was on the slower side. It was not a batting paradise suitable to play lofted shots easily. We might not witness a high-scoring game, however, a 250+ contest could be on the cards.

The Kiwi skipper Kane Williamson missed the last two T20Is due to an injury in his left shoulder. The injury woes continue for him as he is ruled out of the first two ODIs. Mark Chapman is named his replacement.

The Indian opener Rohit Sharma is out of this series because of calf-injury. Mayank Agarwal has been named his replacement.

Ross Taylor is one of the pillars of New Zealand’s batting line up and is one of the most reliable players to bank on. Taylor looked in good touch in the last T20I and will look to carry on his good form. The experienced player – Ross Taylor averaged 55.47 with a strike rate of more then 85 in 2019. The right-handed batsman top-scored for his side in their previous series against India. The all-rounder James Neesham had a great time in 2019 – delivering the goods with the willow and the ball as well. So, he is also a top pick.

Virat Kohli, arguably the greatest ODI batsman ever should be the first player of your Dream11 Fantasy team. The Indian captain failed to register even a single half-century in the T20 leg, and would be hungry to score runs. KL Rahul won ‘Man of the Series’ award in the T20I series for topping the run charts. The wicketkeeper-batman has been a consistent performer for his side recently and is a pretty good pick. India’s premium bowler Jasprit Bumrah along with Mohammed Shami will be also among popular picks. 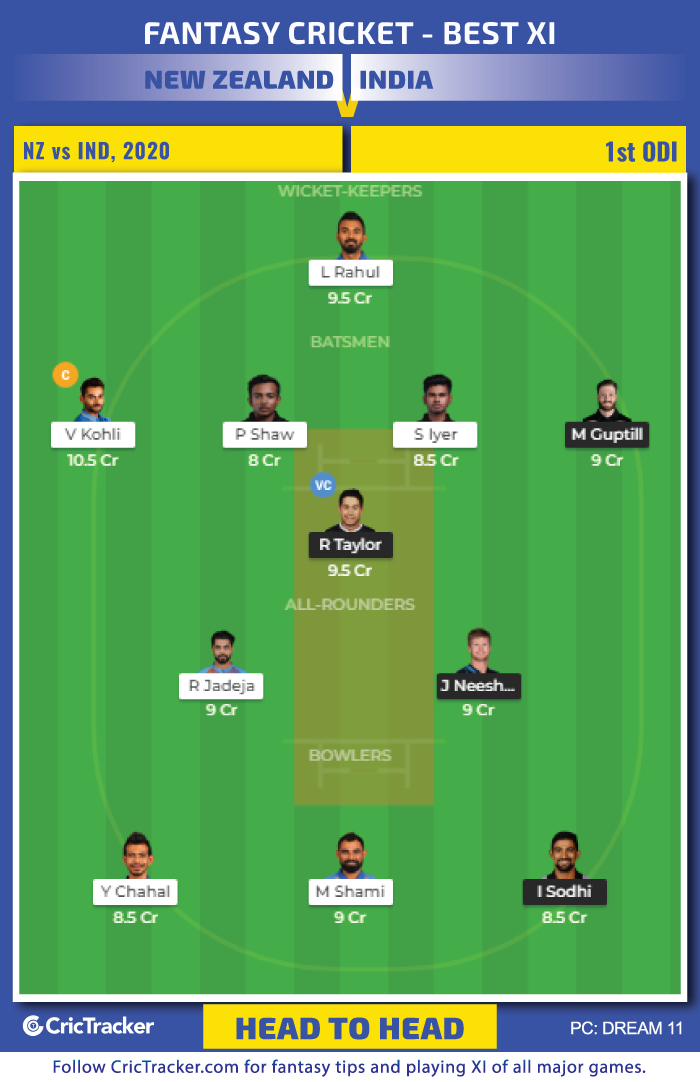 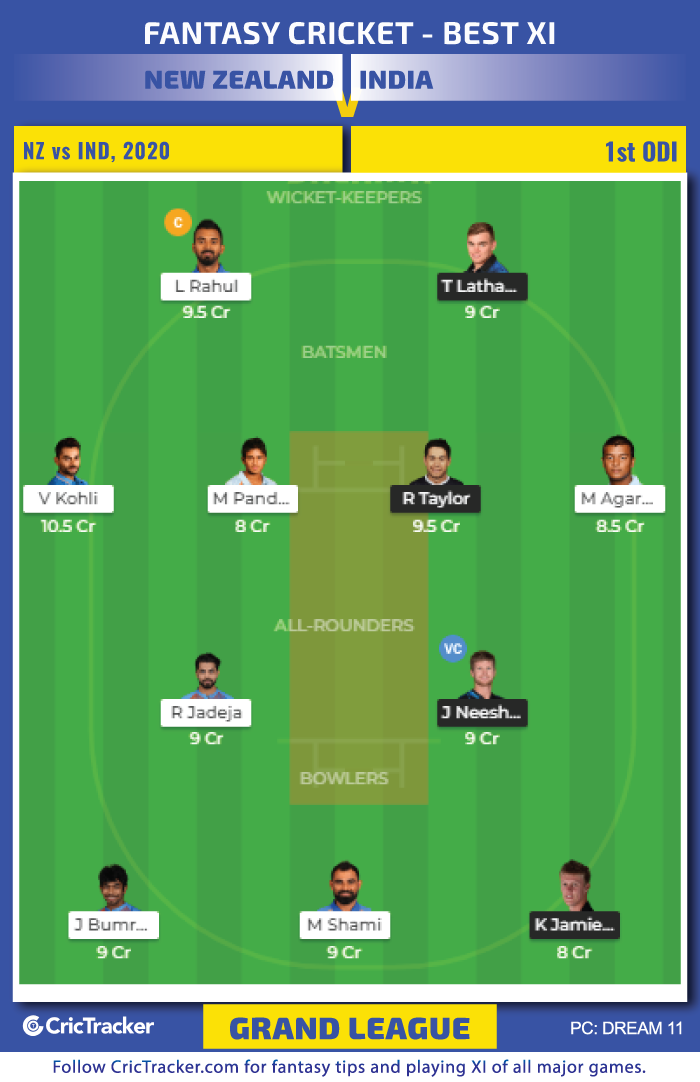 In the first two hours of the game, clouds are expected and the wind will be moderate. So, avoid picking openers of the team batting first, particularly if New Zealand bat first. In the last ODI at this ground, India were bundled out for mere 92 runs in the first innings. Thus, Virat Kohli will be an important pick for this game.

Also, pick the pacers of team bowling first, especially if India bowl first. Mohammed Shami who has the knack of picking wickets with the new ball can be a very good pick. In India’s previous ODI series in New Zealand, the right-arm pacer topped the wicket charts for his team.

India are expected to win the match and take a 1-0 lead in the series.