Prithvi Shaw is set for an ODI debut at the Seddon Park.

India had some jitters in the T20I series against New Zealand. However, Virat Kohli and Co kept bailing themselves out of jail and scripted a 5-0 whitewash. Two of the games in Hamilton and Wellington also went into the Super Over. The Men in Blue are now set to take part in three ODIs, the first of which is scheduled to take place on Wednesday, February 5 at the Seddon Park in Hamilton.

Both teams will be missing some of their important members due to injury concerns. Nevertheless, bearing in mind the numbers, the Kiwis can be deemed as the favourites. In Hamilton, the hosts have won 20 out of the 27 completed ODIs. Last year, they also bowled India out for 92 after Trent Boult’s fifer. But going into the next game, India have quite a bit of chance as well due to their recent form.

The pitch in Hamilton has been a sporting one with the average score being around 262 in ODIs. Moreover, in 32 matches, the team, batting second has won 21 times. Hence, chasing should be the way forward. There are chances of rain during mid-night, but no where near game time. But the conditions could be soggy. The sun will also be out with the temperature around 14 and 24 degrees Celsius.

Kane Williamson, the Black Caps’ skipper, has tweaked his left shoulder and won’t be a part of the first two One Dayers. Mark Chapman has been named as his replacement. Kane also didn’t play the last two T20Is. An out-of-form Martin Guptill and Henry Nicholls will be opening the batting for the Black Caps.

Ross Taylor remains to be a vital cog in their setup. James Neesham is coming off a great List A outing against India A where he picked 11 wickets in four matches and scored 141 runs. De Grandhomme and Santner also add value to their lineup. The focus will also be on Kiwis’ talent bowler Kyle Jamieson.

Prithvi Shaw is all set for his ODI debut, confirmed by Virat Kohli. Mayank Agarwal has replaced Rohit Sharma, who strained his calf in the last T20I. Agarwal is likely to be Shaw’s opening partner in the series opener. Skipper Virat Kohli will be looking for decent score after having a quite outing in the T20Is.

KL Rahul and Shreyas Iyer must to be keen to replicate their performances in the ODIs as well. Manish Pandey may get a look in after his 50 in Wellington. Shami and Bumrah would be leading the pace department. Ravindra Jadeja was economical in the T20Is and he will be a key element for the India. 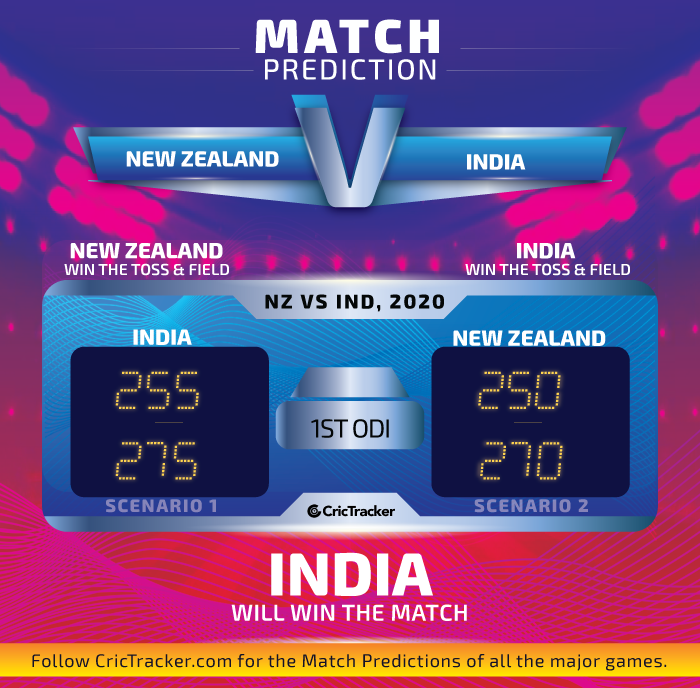