If the first three innings of a match are taken in the account, the average inning score is 328 since 2016 in Basin Reserve.

The first match of the two-match Test series between New Zealand and India will be played from 21 February at Basin Reserve in Wellington.

After playing a fair amount of white-ball cricket, New Zealand and India are set to take on each other in the longest format of the game. The Test series consisting of a couple of Tests is very important for both as it falls under the World Test Championship. After the Test series loss in England in 2018, Virat Kohli’s men have tasted victory in every Test series. Since 2000, India have won just one Test match in New Zealand and will look to better their record in the Kiwi land.

In New Zealand’s last Test series – which was in Australia – they were whitewashed. And, they will be competing against the No. 1 Test side now. The Kane Williamson-led side has a home advantage on their side. The hosts have momentum on their side and will be high on confidence, after clean sweeping the ODI series. Under the captaincy of Kane Williamson, New Zealand have lost just one out of five Test matches at the game venue.

No rain is expected at Basin Reserve in Wellington during the course of the game. The temperatures during the match time for the five days as follows:

The weather will be cloudy for the first three days and strong winds are expected on the first day.

The pitch of Basin Reserve is pretty good for batting with a fair amount of grass on it for the first two days. The deck generally assists pacers as compared to spinners. It is generally hard and doesn’t provide a significant amount of turn to the spinners.

Neil Wagner who is awaiting the birth of his first child will be unavailable for the first Test. New Zealand have called Matt Henry back to their squad.

Kane Williamson and Ross Taylor, the soul, and the heart of New Zealand’s batting unit, are the most reliable picks from the Kiwi side. Both batsmen are well equipped to handle the solid Indian bowling attack. Kane and Taylor have a great record in Basin Reserve as well.

Among bowlers, Trent Boult and Tim Southee are pretty good picks from the Kiwi side. Both experienced pacers are known for their exploits in New Zealand in the red-ball cricket. The veteran duo has a good record at the match venue as well.

As far as batsmen from the visiting side are concerned, Virat Kohli, Cheteshwar Pujara and Ajinkya Rahane are among popular picks. The Indian skipper is the No. 1 batsman in the ICC Test rankings. India’s vice-captain Ajinkya Rahane has been in good form of late. His selection percentage is about 50, thus, he could be the differential pick in your fantasy contest. In Test cricket in New Zealand, Kohli and Rahane average 71.33 and 54 respectively.

Ravindra Jadeja, if plays, is a very good value pick for his cost – 8.5 credits. Among bowlers, Jasprit Bumrah and Mohammed Shami are the most popular picks and pretty trustworthy options. Bumrah has picked up five wicket-haul in every country in which he has played so far. Shami who is known for his exploits in the second innings is in the best phase of his career. 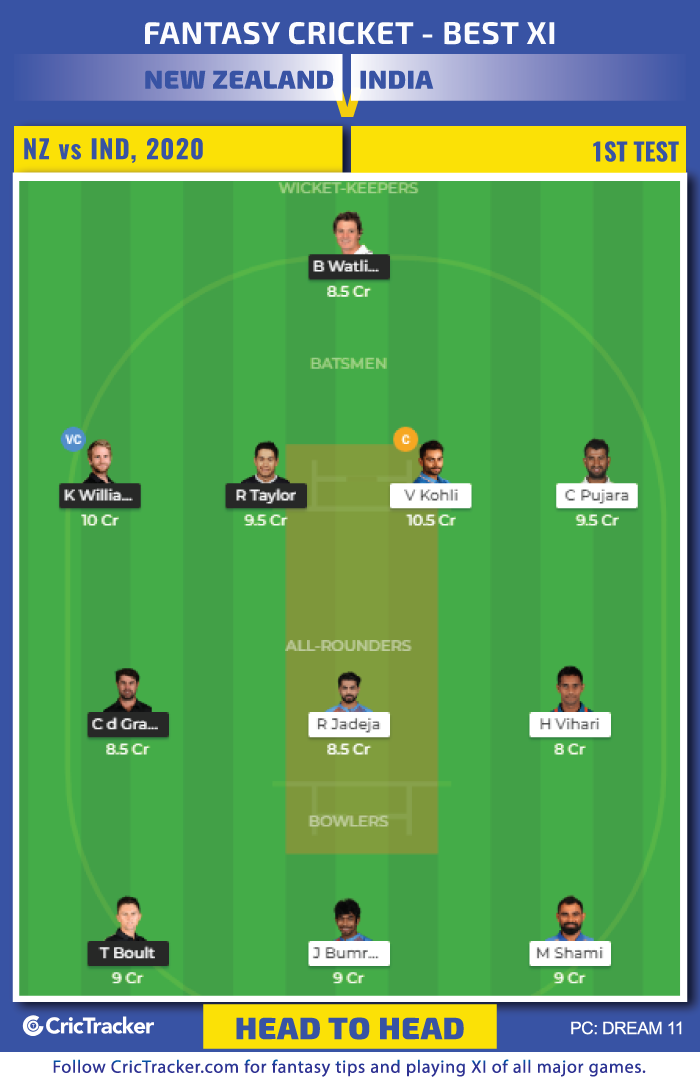 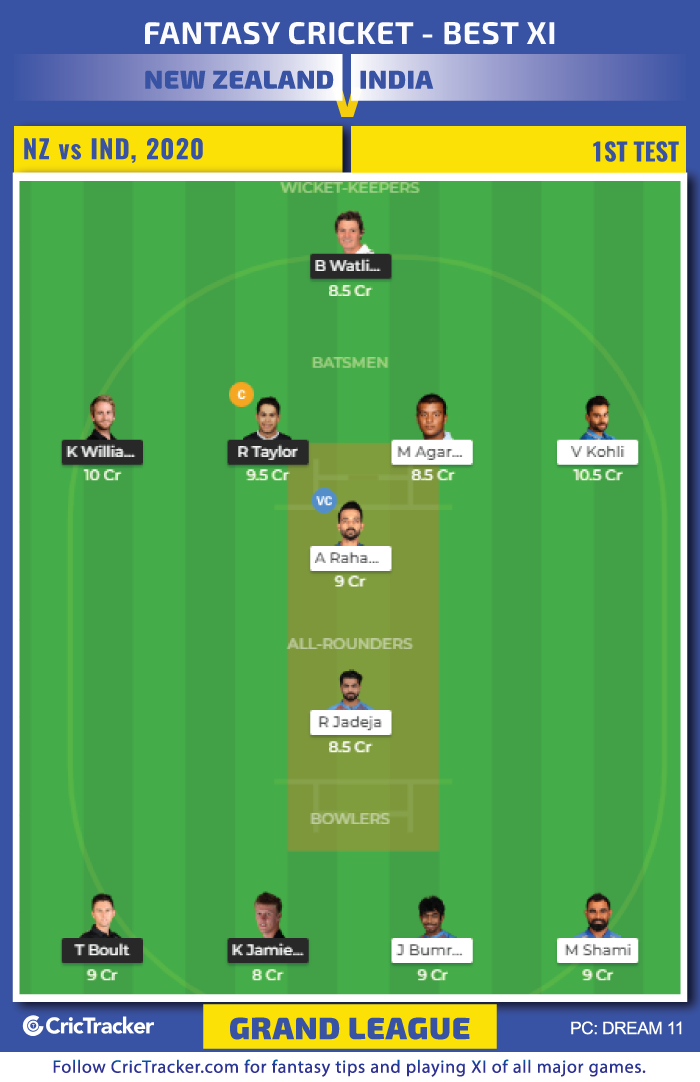 If the first three innings of a match are taken in the account, the average inning score is 328 since 2016 in Basin Reserve. In this duration in 18 innings, there have five instances of teams crossing 400, including four 500+ scores on this ground. As far as the top seven batsmen are concerned, their combined average is more than 43 since 2017.

On average at the match venue, the fast-bowlers pick up a wicket on every 31st ball while spinners take about 90 balls to strike once. However, the numbers change drastically since 2016. In this duration, the pacers pick up a wicket after 65.39 balls and spinners consume 67.61 deliveries to scalp a wicket.

Thus, don’t shy from picking six batsmen including the wicketkeeper in your team.

We predict India to win this game and take lead by 1-0.