The match is likely to be played on the same surface and in that case, the pitch might be on the slower side.

The second of the five-match T20I series between New Zealand and India will be played on 26 January 2020 at the Eden Park in Auckland.

India’s penchant for playing at Eden Park and the home sides’ wrecked record at the venue continued in the first T20I as the Men in Blue successfully chased down 204 to take a 1-0 lead in the five-match series. This is also the first time that India have won the first T20I of a bilateral series on New Zealand soil and it was all because of the immaculate run-chase affected by their top-order.

While KL Rahul [56] and Virat Kohli [45] set the platform through some exquisite and at some time brutal shot-making, the calmness of Shreyas Iyer [58*], who ensured that the chase wasn’t botched once the duo of Kohli and Rahul departed in quick succession.

New Zealand, on the other hand, would feel that they probably got 15-20 runs short, given the way the likes of Ross Taylor and Kane Williamson were going. But that was all because of Jasprit Bumrah’s immaculate bowling effort, that saw him give away just 16 runs in his last two overs. The Kiwis could only manage 25 in their last three overs and given the inexperience in their bowling unit and the short boundaries + flat pitch on offer, it was never going to be enough against a strong Indian batting unit, something they would want to rectify in the second match.

Another great day of cricket is expected in Auckland on Sunday. According to the weather report, sun and clouds are set to play hide and seek throughout the day with the temperatures fluctuating between 19 and 24 degrees Celsius and the humidity hovering around 72℅. Chances of rain- minimal.

Flat Pitch. Short boundaries. A plethora of runs. This was the order of the day during the first T20I. However, with this being the second game on the ground, the track might turn out to be on the slower side bringing the bowlers boasting of variations in the picture.

Ish Sodhi [2-36] looked the most threatening of the Kiwi bowlers in the first game and with the match set to be played on the same track, the leg-spinner might come in handy on Sunday too. Hamish Bennett made good use of the slower ball in the last game, and if the pitch turns out to be on the slower side, his variations could turn out to be handy.

India- The Men in Blue had a near-perfect day with the bat with the likes of KL Rahul [56], Virat Kohli [45] and Shreyas Iyer [58*] going hammer and tongs against the Kiwis. Rohit Sharma had a rare off day when he mistimed one off Mitchell Santner.

One of the reasons why India chased 204 and not something in the range of 225, it was because of the Jasprit Bumrah, who conceded just 2 boundaries in his four overs including 4 runs and a wicket in his penultimate over. Yuzvendra Chahal too bowled brilliantly in the middle-overs and claimed the wicket of a dangerous looking Kane Williamson with a leg-break. The duo will once again be the spearheads of the bowling unit. 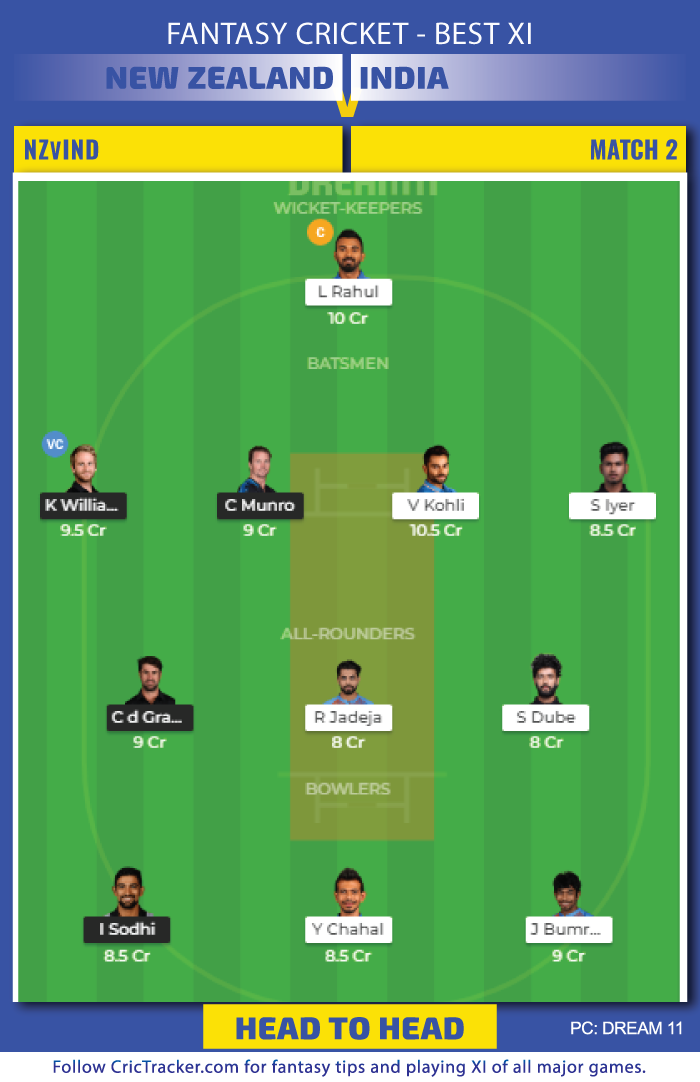 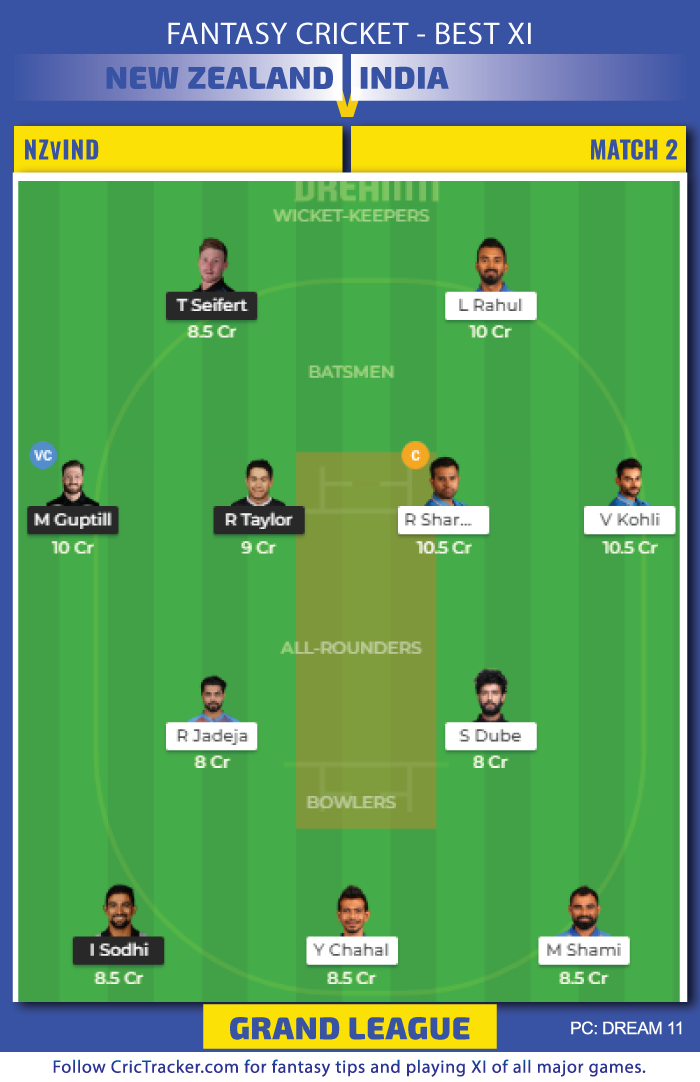 Rohit Sharma missed out in the last game when he miscued one off Mitchell Santner. But, on such short grounds, the Hitman is too good a player to miss out twice. Yuzvendra Chahal [1-32] bowled pretty well in the middle-overs of the last game.

With the match set to be played on the same track, the pitch might be on the slower side and hence picking the likes of him or even Ish Sodhi, who was the only Kiwi bowler who troubled the Indians, could be worth a punt in your grand league team. Moreover, Sodhi has 13 wickets to his name against India- the most by any bowler against India in T20Is.

India is predicted to win this game.