The opening duo of Colin Munro and Martin Guptill will among popular picks for this match.

The fifth match of the bilateral T20I series between New Zealand and India will be played on 02 February at Bay Oval in Mount Maunganui.

In the fourth T20I in Wellington, India made as many as three changes to try out other players. And, we may witness a few changes again. India rested Rohit Sharma in the fourth T20I, however, he is expected to be back in the playing XI. Virat Kohli might rest himself and Rohit would take the charge in the former’s absence. Shivam Dube has failed to fire with the willow in this series so far, and Rishabh Pant might replace him.The team management should also rest Jasprit Bumrah, and bring Mohammed Shami back in the XI.

The hosts came very close to taste victory in the last two games. However, they couldn’t breach the final barrier – Super Over on both instances. New Zealand will try to finish the series on a positive note, and it’s fairly possible. In Mount Maunganui, the BlackCaps have lost just one out of six matches in the shortest format. At this venue, their win/loss ratio is exactly four – the best for the Kiwis in any ground of New Zealand, where they have played at least three T20Is. However. to do so, they have to step up as a unit in both the departments – batting and bowling.

The temperature will hover between 20°C to 24°C during the game time at Bay Oval in Mount Maunganui. The weather is expected to be clear with no chances of rain during the match time.

The pitch of Bay Oval is generally batting friendly and there is no reason to not expect a high-scoring contest. The spinners get more assistance from the deck than fast-bowlers.

Average first innings score: 199 (completed innings have been taken into the account)

Record of chasing teams: Matches – 5, Won — 0, Lost — 5 (completed matches have been taken into the account)

The Kiwi skipper Kane Williamson missed the last match due to an injury in his left shoulder. Kane is expected to get fit for this game.

The opening duo of Colin Munro and Martin Guptill will among popular picks for this match. And, we recommend to pick at least one of the two, especially if Jasprit Bumrah is rested. The southpaw who has scored half-centuries is the top-scorer for his side and has smashed the highest number of boundaries in the series so far.

Munro has an incredible record at the game venue: an average of over 61, a strike rate of more than 193, two centuries and one fifty in just five matches. Guptill has a top-notch record as well, scoring three 50+ scores in four innings. Ish Sodhi picked up three wickets in the last game and his selection percentage has gone over 70. In Bay Oval, the leg-spinner has scalped 10 wickets in five innings with imposing figures. Thus, Sodhi is a good option as well.

KL Rahul is red-hot form and runs are just coming off from his bat currently. Rahul is the highest run-getter in the series and has the best batting average in this series so far. The wicketkeeper-batsman is the most selected player in the Dream11 yet again and would be the first pick in the small-leagues.

Rohit Sharma who is expected to be back in this game is also one of the top picks. The Hitman displayed his class in Hamilton and might do the same in the fifth match. In case Kohli is rested, Shreyas Iyer who has done well so far is also a good option to be considered, and is a value pick. Shardul Thakur is the most selected bowler in Dream11 for this match. The Mumbaikar has performed decently, albeit expensive, and is a value pick because of his low credit. 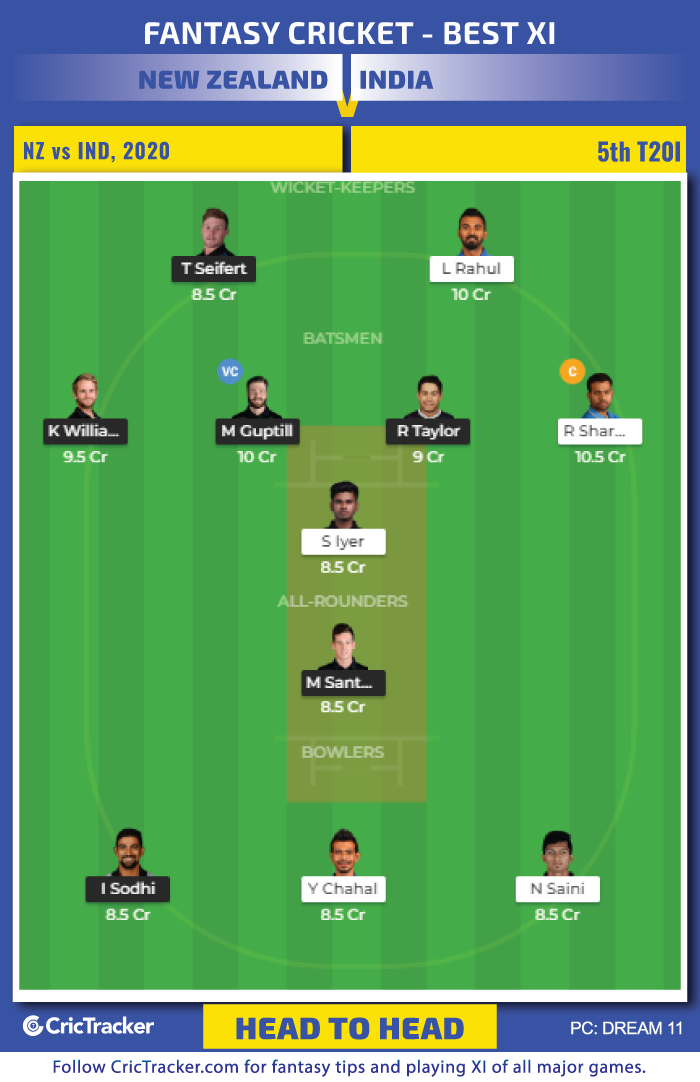 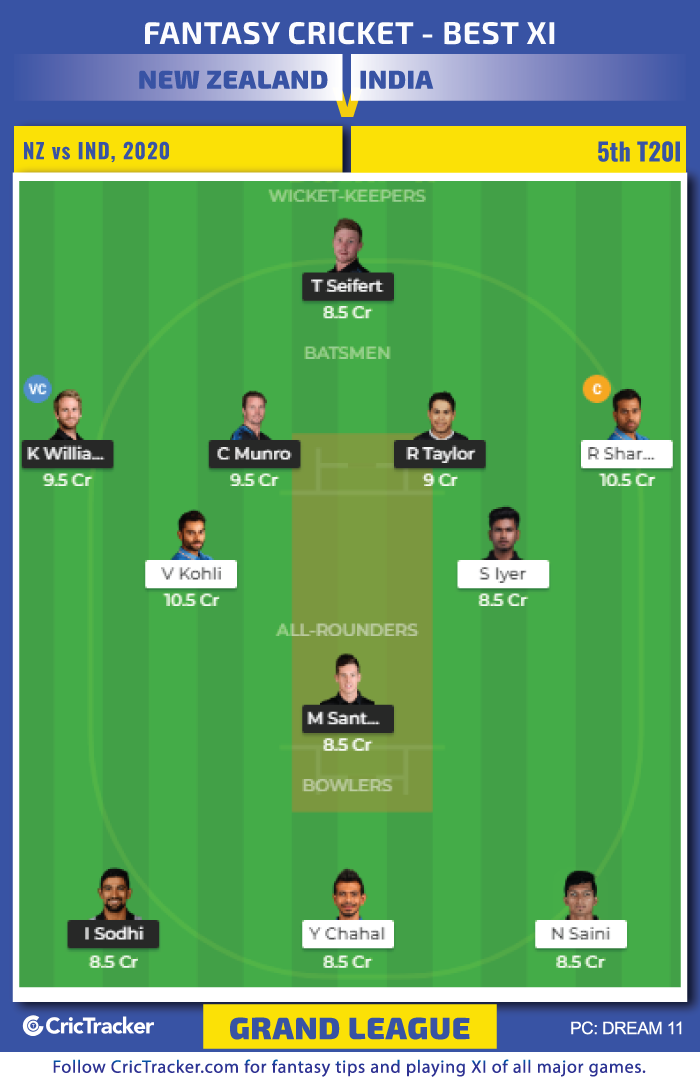 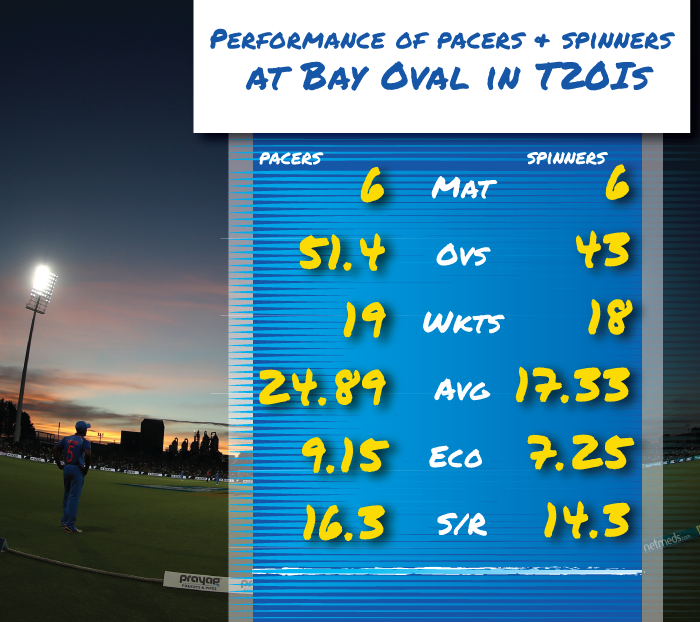 As the graphic shows, the spinners have their nose ahead of pacers by a fair margin. Thus, we suggest to pick spinners like Ish Sodhi and Mitchell Santner and Yuzvendra Chahal in your fantasy sides. Also, consider picking batsmen who are a good player of spin bowling.

Although Navdeep Saini failed to pick up a wicket, he was quite impressive. His selection percentage is very low, and that makes him an excellent punt both in small leagues and grand leagues.

We predict New Zealand to win this game and finish the series at a score-line of 1-4.