Will New Zealand make any changes to their winning combination?

Not for the first time on this Trans-Tasman tour, India have found themselves in a must-win situation in the limited-overs series. The situation was the same in the ODIs and T20Is against Australia. On both occasions, they came out on top and managed not to lose the series. It will be interesting to see if New Zealand can stop the Indian juggernaut this time.

The Men in Blue are yet to register a T20I win in the Kiwi nation and would be gearing up for the same ahead of the crucial match. Rohit Sharma and the team management messed up the team selection in the series opener and there could be a few changes in the bowling department which looked extremely weak in Wellington. The batting crumbled under pressure but it is bound to happen in a mammoth 220-run chase.

The Black Caps, on the other hand, will be keen on sealing the series in the second game itself. Though one can’t be entirely sure that they will go in with the same combination for this game. Like India, even they are trying a few things ahead of the World Cup and expect the likes of Jimmy Neesham and Doug Bracewell to feature in this encounter. In fact, the Kiwis are spoilt for choices in the all-rounder department and it is tough on anyone to sit out.

Eden Park in Auckland is one of the largest (in terms of capacity) and best Stadiums in New Zealand. The pitch is generally heaven for the batsmen. Australia chased down 240-odd runs against New Zealand last year at this venue. Another run-fest is on the cards this time and expect the team winning the toss to bat first.

It will be cloudy throughout the game and mostly, the rain will make its presence felt during the match which might prompt the teams to bowl first as well.

Colin Munro and Tim Seifert should continue to open the innings for the Kiwis while Williamson and Taylor will follow them to provide stability. The likes of Daryl Mitchell and Neesham could be shuffled up and down according to the situation while Santner and Scott Kuggelijn can also bat. Tim Southee will lead the pace attack along with the fiery Lockie Ferguson and Ish Sodhi is the other spinner along with Santner.

India can make quite a few changes for this game and Vijay Shankar might have to sit out. He didn’t bowl in the series opener and the bowling might be strengthened by dropping him. Kuldeep Yadav will most likely come in and bowl in tandem with Chahal. Khaleel Ahmed endured an ordinary outing and should make way for Siddarth Kaul. The likes of Dinesh Karthik and Rishabh Pant might get another opportunity to stake their claim.

The prediction is for Team India to level the series and take it into the decider. 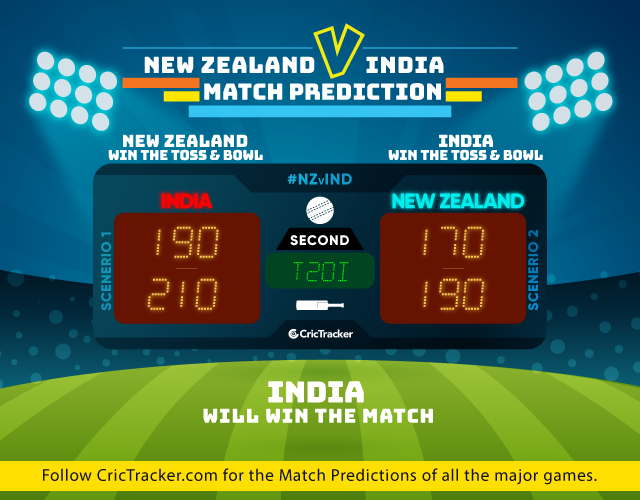