MS Dhoni has been declared fit to play this game while the Kiwis have an injury concern.

India and New Zealand will lock horns for one final time in this five-match ODI series. After a drubbing in Hamilton, the visitors must be gutted and will be looking to make a stunning comeback to end the series on a high. The Kiwis, on the other hand, registered a much-needed win after going down meekly in the first three matches of the series and they will be surely high on the confidence.

But the hosts have been jolted with an injury to Martin Guptill who has aggravated his lower back during the fielding session on Saturday. Colin Munro has been recalled to the side who played a Super Smash game and will join the team on the match day. MS Dhoni has been declared fit for this match and will slot back into the XI straightaway now in place of either Dinesh Karthik or Ambati Rayudu.

The fifth and final game of the 5-match ODI series between New Zealand and India will be hosted by the Westpac Stadium in Wellington.

Unpredictable track. Either remains flat throughout the game or stays slow.

Note: Martin Guptill is doubtful for this game. He could be replaced by Colin Munro.

Note: Mohammed Siraj could get his first game on the tour. One of Karthik and Rayudu could be dropped as MS Dhoni has been declared fit.

Colin Munro was playing Super Smash in Auckland on Saturday. He will join the squad as cover for Martin Guptill.

Rohit Sharma scored a century in each of the previous ten ODI series/tournaments he played. He has two fifties to his name in this series but no century yet.

Rohit Sharma, Ross Taylor and Trent Boult are the ideal options for the captain and vice-captain. Hardik Pandya, Shikhar Dhawan and Kedar Jadhav are the other alternative options. Even the likes of Kuldeep Yadav and Kane Williamson could turn out to be the surprise picks.

Suggested Playing XI No.1 for for Head to Head/Small Leagues: 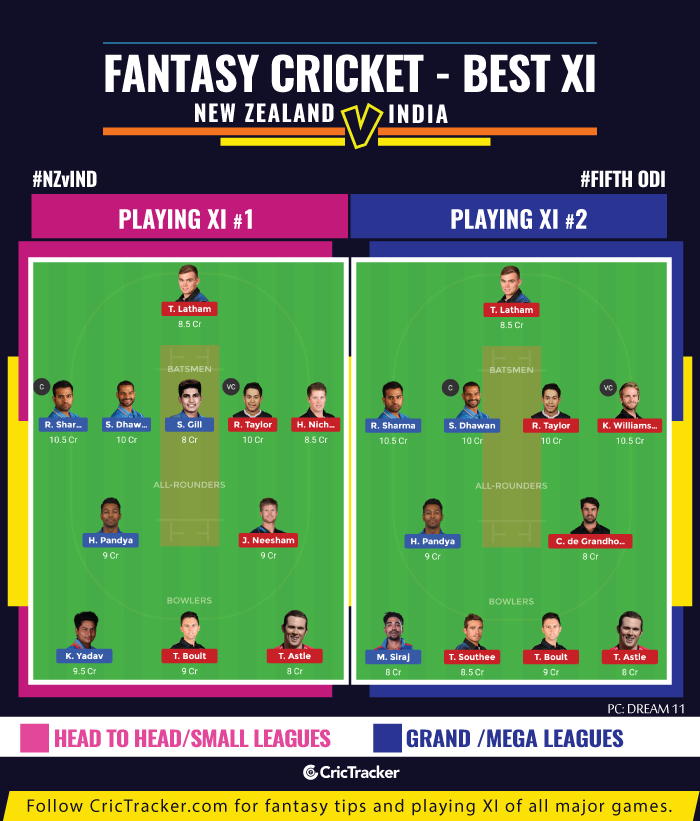 It is advised not to pick players who could be dropped and rested among Indians. The likes of Rohit, Dhawan, Gill, Pandya, Kedar, Kuldeep and Chahal are only ones who seem to be sure of featuring in the ODI.

Team India is expected to come back strongly and seal the series by 4-1.