New Zealand will be facing the Netherlands in a one-off T20I at McLean Park in Napier on March 25. The hosts will be led by Tom Latham who has been impressive so far in the leadership role. It is to be noted, though, that the 12 regular members of the Black Caps’ limited-overs scheme of things, have not been selected for the upcoming series.

Nevertheless, it will be a perfect opportunity for the youngsters to prove their mettle, and they would be looking to make the most of their opportunities against the Dutch. The Netherlands, on the other hand, would be hoping to pull off a huge upset against a new-look New Zealand outfit in this only T20I encounter between both the sides.

The promising side, led by Pieter Seelaar, would be hoping to leave no stone unturned against a depleted Kiwis, as they look to make some improvements in their performances as far as the shortest format is concerned.

The Napier pitch is a balanced one which will be of great assistance to the bowlers as well as the batters. The average first innings score at this venue in the last five games has been 148 runs. The pacers will be looking forward to making merry on the surface, especially with the new ball in hand.

The batters, on the other hand, can score runs with ease provided they are well set at the crease. While batting is not expected to be that difficult on this wicket, the captain winning the toss will have absolutely no hesitation in bowling first.

Expect Martin Guptill to come out all guns blazing in this contest. The senior New Zealand batter is currently the second-highest run-getter in T20Is having amassed 3,299 runs from 112 matches averaging 32.66. In fact, the dynamic opener also has a very good opportunity to surpass India skipper Rohit Sharma and achieve the top spot. The Hitman has 3313 runs in this format, and Guptill just needs 14 more runs to grab the first position.

Jayden Lennox has been one of Dutch’s most consistent performers with the ball in hand. He has registered 14 scalps to his name from 10 appearances so far and will be eager to add more to his tally. The promising left-arm orthodox spinner would be expected to leave the New Zealand batters bamboozled. Since the hosts do not have much depth in their batting for this match as far as experience is concerned, Lennox would be hoping to make it matter the most against a depleted Black Caps squad. 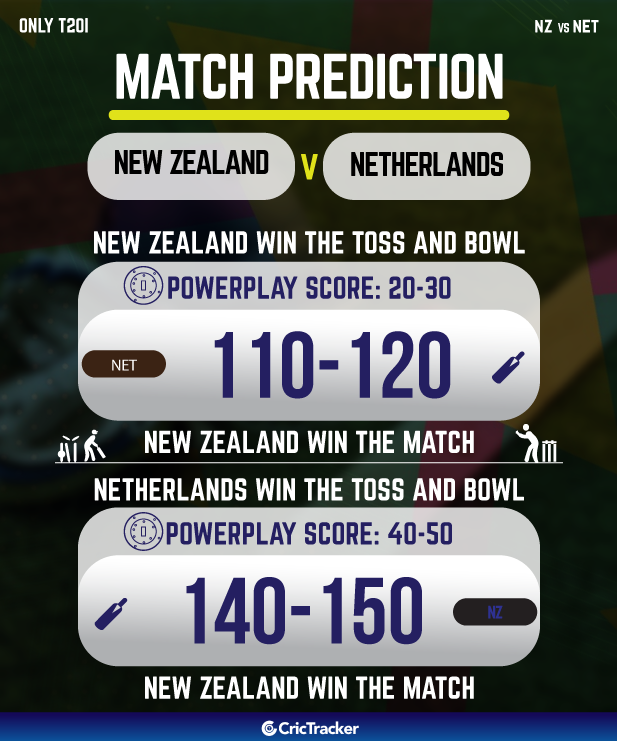