What are the chances of Harmanpreet Kaur and Mithali Raj scoring big?

The first two matches of the 3-match ODI series between New Zealand Women and India Women hardly witnessed any competition. India chased down 193 for the loss of one wicket in the first game while the bowlers delivered even better in the second game to set up an 8-wicket win. The spin trio of Ekta Bisht, Poonam Yadav and Deepti Sharma bagged 14 wickets between them by picking at least two each in both matches.

One of the main reasons for the White Ferns’ poor show has been their batting as no player back their skipper Amy Satterthwaite and the bowlers didn’t have much to defend against Smriti Mandhana and co. Despite the fate of the series already decided, the match will be crucial for both the sides as it comes under the ICC Women’s ODI Championship which decides the direct qualification of the teams for the World Cup in 2021.

The third and final game of the 3-match ODI series between New Zealand Women and India Women will be hosted by the Seddon Park in Hamilton.

The Seddon Park in Hamilton hasn’t hosted much of Women’s cricket recently but in the last ten years, scores of 250 in One-Dayers and 140+ in Twenty20s are often witnessed here. However, the Men’s ODI on Thursday turned out to be a spicy track. The pitch for Women’s match could have become a slower one if full 100 overs of play was carried. Instead, the track could now be a flatter one.

Note: New Zealand might bring in Katie Perkins at the cost of one of the bowlers or Lauren Down who failed in both games.

Note: India might pick Meshram ahead of Hemalatha depending on the track and toss. They are expected to consider Mansi Joshi ahead of Shikha Pandey or Jhulan Goswami keeping the T20I series in the mind.

Poonam Yadav has been good enough in deceiving the batters with the flight she gets and making her the strike bowler for the Indian team. In the 14 ODI matches since the start of 2018, she bagged 25 wickets at a strike-rate of 29.9. Poonam went wicketless in only two of the 14 games.

Smriti Mandhana will obviously be the first choice for either as captain or vice-captain have scored eight fifty-plus scores in her previous 10 ODI innings. Poonam Yadav and Deepti Sharma are perfect as captain and vice-captain among all-rounders and bowlers. Amy Satterthwaite and Jemimah Rodrigues are worthy multiplier picks. The senior players Sophie Devine, Suzie Bates, Mithali Raj and Harmanpreet Kaur can also be considered. 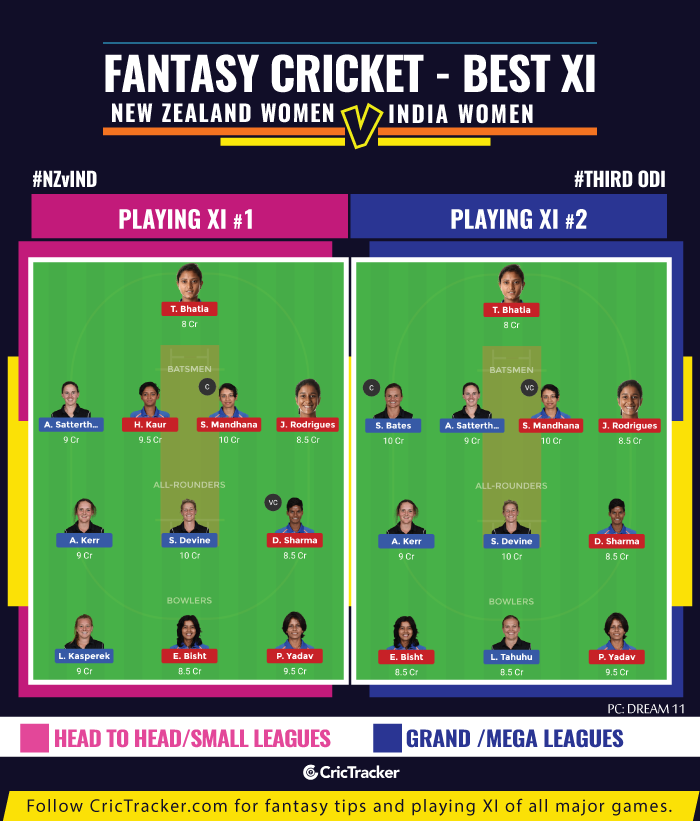 Harmanpreet Kaur neither batted nor bowled in the series thus far. She could be given a chance to bat at No.4 ahead of Mithali Raj who scored a fifty in the previous fixture.

India Women are expected to ease past the hosts once again to complete a series whitewash.