Sophie Devine scored 693 runs with help of three tons and three fifties in 13 innings since 2018.

The 1st game of the 3-match ODI series between New Zealand Women and South Africa Women will be played at Eden Park Outer Oval in Auckland.

South Africa Women’s tour of New Zealand set to begin on Saturday when the two sides face off in the first game of the 3-match ODI series which is part of ICC Women’s ODI Championship. The first two matches of this series will be played at the Auckland’s Eden Park Outer Oval while the last ODI will be hosted by Hamilton’s Seddon Park. This ODI series will be followed by a 5-match T20I as a preparation for the ICC Women’s T20 World Cup. South Africa will be boosted by the return of their regular skipper Dane van Niekerk who will be playing her first International game since February 2019.

The weather forecast doesn’t suggest any chances of rain and the match is likely to be finished without any interruptions.

The Eden Park Outer Oval hosted only one Women’s ODI in the last five years. In February 2017, the New Zealand Women chased down the target of 276 set by Australia. However, the matches in both Men’s and Women’s cricket in the current have been played on slower surfaces. Hence, we might not see totals over 225 in the game to be played on Saturday.

Jess Kerr has been in impressive form during the Women’s Super Smash where she bagged 20 wickets in 11 matches. She finished as tournament’s leading wicket-taker ahead of her younger sister Amelia Kerr. Jess also picked seven wickets across five matches in the Women’s One-Day Cup. Dane Van Niekerk has scored 602 runs since the start of 2018 in ODIs at an average of 60.2 with a century and four fifties. She also picked up 8 wickets in the 14 ODIs she played in this span. Sophie Devine’s ODI numbers are even impressive in this period as she scored 693 runs with help of three tons and three fifties in 13 innings. She also picked 11 wickets at an average of 32.09 as well. 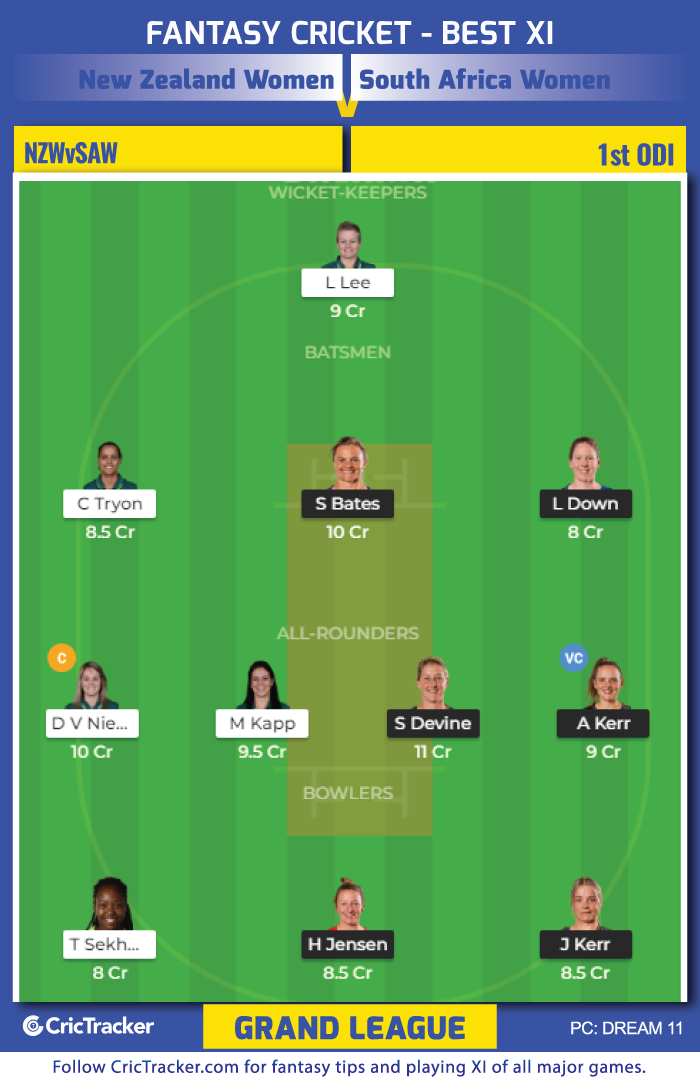 A 3-way battle could be seen between Anna Peterson, Jess Kerr and Leigh Kasperek as only two of the three can be picked in the playing XI. Jess Kerr received a national call-up for the first time and is likely to be picked in the XI as it gives her proper exposure ahead of T20 World Cup. Paterson was in great form with handful runs with the bat. This means, in all likelihood, only one of Peterson and Kasperek are likely to find a place in the XI.

England Women are expected to start the series with a big win.