Wait for the playing XIs to come. England will definitely make a few changes to give a chance to all the players before the main series starts.

The 1st T20 Practice Match between New Zealand XI and England is being played at the Bert Sutcliffe Oval in Lincoln.

England started their New Zealand tour on a winning note. They defeated the New Zealand XI in the first T20 practice game by six wickets comfortably. It was a perfect outing for their batsmen especially Jonny Bairstow who scored an unbeaten 78 in the 173-run chase. However, the visitors would want their newbies Patrick Brown, Saqib Mahmood to get more time to get into the groove before the series opener.

Matthew Parkinson didn’t play in the first game and he is likely to take the field for this game. Also, some of England’s top players may opt to stay away from this game to test the other batsmen in the line-up as well. Bairstow might be rested to give chance to other players. New Zealand XI players, on the other hand, will be keen on putting up a good show in order to impress the selectors.

The weather forecast for this match is a little bit worrying for both the teams. There is a 37% chance of rain in Lincoln on Tuesday and there will be a fair bit of wind blowing as well. It will also be chilly as the temperature 12-14 Degrees Celsius during the match.

The dark clouds will hover around the stadium for the whole duration of the match. The ball might swing a bit. But that shouldn’t change the nature of the pitch by much. A decent batting track was on offer in the first game and the same should continue for this encounter as well. Expect the team winning the toss to bowl first.

Tim Seifert will open the innings along with Munro and both should be picked in your Dream11 Fantasy team. Anrau Kitchen is another exciting New Zealand player who can deliver both with bat and the ball. For England, If Bairstow is not playing, Banton, Morgan and Malan will be important batsmen. In bowlers too, Curran and Parkinson might play and in that case, you should pick them. 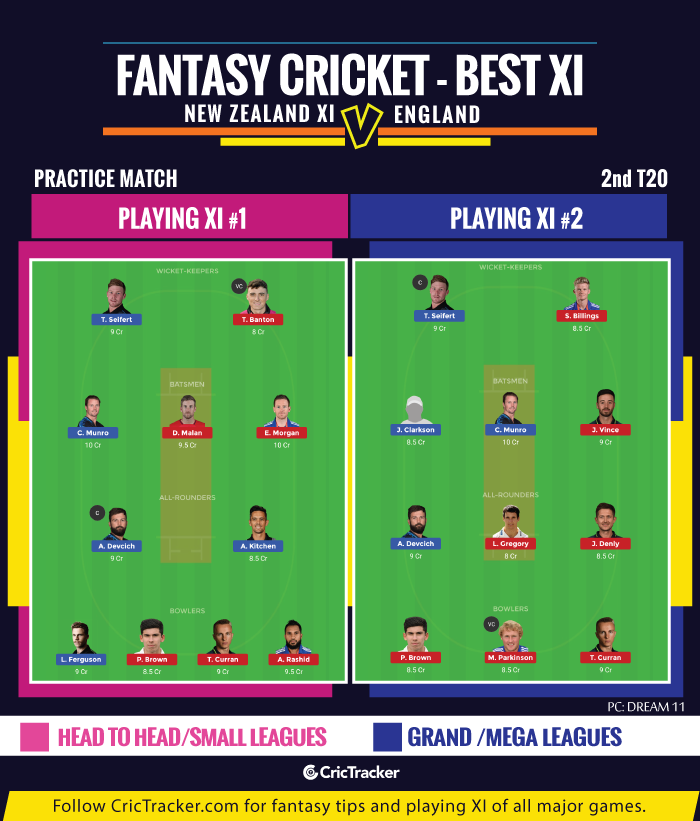 Wait for the playing XIs to come. England will definitely make a few changes to give a chance to all the players before the main series starts. The likes of Tom Curran, Parkinson and Malan might be included.