Back in November 2019, only one T20I was played at the Hagley Oval between England and the Black Caps.

After facing West Indies and Pakistan at home, New Zealand are all set for a five-match T20I series against Australia, starting Monday, February 22. The opening game is scheduled to take place at the Hagley Oval in Christchurch. The Kiwis beat Pakistan 2-1 in the T20Is and would be high on confidence. Martin Guptill has also passed the fitness test and is available for the opening match.

The Aussies lost their previous T20I series against India and for their upcoming games, they have gone with a number of young players. Skipper Aaron Finch also said that Josh Philippe would be handed his maiden national cap. It’s also a chance for the likes of Tanveer Sangha, Riley Meredith to show that they have the capability to perform after decent shows in the 2020-21 Big Bash League.

The pitch in Christchurch has been fairly good for batting. In ODIs, the average score is around 275. Back in November 2019, only one T20I was played at the venue between England and the Black Caps. The visitors chased down 154 in 18.3 overs. The clouds will be there with no chances of rain. The temperature will be around 18 degrees Celsius with the humidity mostly in the mid-60s.

Playing Combinations for NZ vs AUS

Kane Williamson isn’t someone, who would go for extravagant strokes. Rather, he prefers to rotate the strike and get the odd boundary. In 62 T20s, he has 12 half-centuries at a strike-rate of above 120, showing that he’s a flexible batter. The Black Caps would be looking up to him for a decent knock with the bat in hand.

Matthew Wade has played some blistering knocks while opening the batting for Hobart Hurricanes in the BBL. In the 2020-21 BBL, he got a score of 86 against the Sydney Sixers. Moreover, he had scores of 58 and 80 against India back in December 2020. Without a doubt, he is in magnificent touch with the willow in hand. 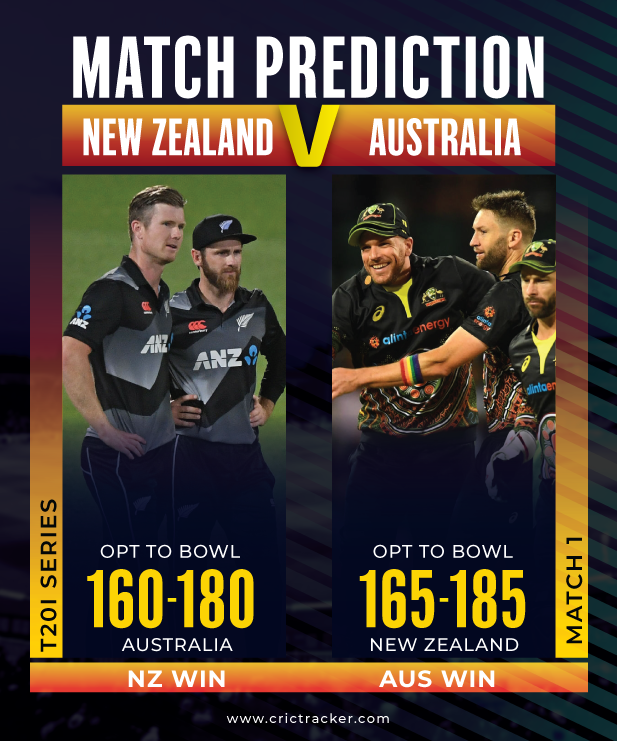