You can pick all 3 wicketkeepers in any one of your Dream11 Fantasy teams. 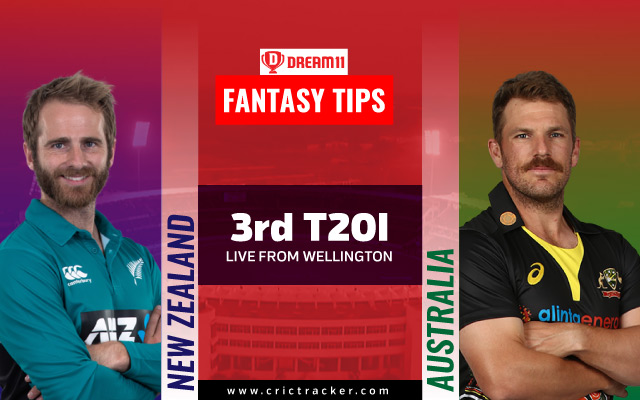 The 3rd of the 5-match T20I bilateral series between New Zealand and Australia will be played on 3rd March at Westpac Stadium, Wellington.

Hosts New Zealand will take on Australia in the 3rd of the 5-match T20I series on Wednesday. With the way they played in the first 2 matches, New Zealand have proved why are they are a very difficult opponent to beat in their home games. In the first T20I, they won convincingly by 53 runs, while in the second T20I, they got a hard-earned win by a close margin of 4 runs. Batsmen are making life easy for the bowlers by scoring huge runs on the board. Now, they will look forward to wrapping up the series in the third match itself.

Meanwhile, Australia needs to win this match to stay alive in this series. They are under immense pressure, having lost the first two T20Is. After their terrible loss in the first T20I, Marcus Stoinis’ heroics bought them close to the victory line in the second match, but they couldn’t hold their nerves. They should look to strengthen their batting department with a specialized batsman instead of an all-rounder in the middle-order. Skipper Aaron Finch and Glenn Maxwell haven’t fired in the first T20Is and they will need to step up if Australia were to make a comeback in this series.

It will be cloudy in the evening here in Wellington. The temperature will be constant at 19 degrees Celsius and the humidity levels are high at 78 percent. The chances of precipitation for this match are low.

It’s a good wicket to bat on in the initial overs, but it might get tougher in the second half. The quick bowlers can expect bounce out of the surface. Chasing over 160 plus scores is always difficult in this venue. The team batting first has won most of the matches played here, hence whoever wins the toss should bat first on this wicket.

Martin Guptill thrashed the Australian bowlers to all parts of the ground in the second T20I, scoring 97 runs from 50 balls. He missed his third T20I century by just 3 runs. Guptill has scored 2718 runs in his 96 T20I matches.

Devon Conway in his early cricketing days but he has already shown that he can be a reliable player for New Zealand for a long time. He remained unbeaten on 99* from 59 balls in the first T20I and will be looking for a similar outcome in the next game.

New Zealand skipper Kane Williamson can score runs on any kind of wicket with his top-notch skill and adaptability. After getting dismissed for 12 runs in the series opener he made it up with a half-century in the second T20I. He scored 53 runs from 35 balls.

James Neesham was impeccable at the death overs with the bat in both the T20Is. Australian bowlers were under scanner bowling to him. In 2 matches, he has scored 71 runs at a whopping strike rate of 229.03 with the highest score of 45*. With the ball, he has picked 2 wickets.

Marcus Stoinis almost won the game for Australia in the second T20I. He scored a brilliant 78 runs from just 37 balls. Overall in this series, he has scored 86 runs at a strike rate of 179.16.

23-year-old Josh Philippe showed he is ready for international cricket by scoring 32 balls 45 in the 2nd T20I. He can be a good budget pick for your Dream11 Fantasy team at 8.5 Credits.

Glenn Maxwell failed to deliver with the bat in the first 2 matches, but we know how brutal he can be if he gets going.  The owner of 1600+ T20I runs should not be a poor pick.

Tim Seifert, Josh Philippe and Matthew Wade are all talented players. Hence, you can pick all 3 wicketkeepers in any one of your Dream11 Fantasy teams.