Ross Taylor will not play 1st ODI while Kane Williamson has been ruled out of the whole ODI series. The 1st of the 3-match ODI series between New Zealand and Bangladesh will be played on 20th March at University Oval in Dunedin.

The match is scheduled to start at 11:00 AM local time and 3:30 AM IST and it will be streamed live on Fancode.

New Zealand will take on Bangladesh in the 1st of the 3 match ODI series on Saturday. The Kiwis didn’t play any ODI matches when they hosted West Indies, Pakistan, and Australia in the last 3-4 months. Now this time they will be playing an ODI match after long gap of one year. Last time they played an ODI was against Australia in Australia where they lost by 71 runs and series was the postponed amidst Covid-19 pandemic.

They whitewashed India 3-0 when they played the last ODI series on home soil. Tom Latham will lead the side in the absence of injured Kane Williamson. Devon Conway, Will Young, and Daryl Mitchell have earned their maiden ODI call-ups. It will be interesting how they approach the ODI series with the new stand-in skipper. Ross Taylor has also been ruled out of the series opener.

On the other hand, Bangladesh are touring New Zealand after 2 years. They haven’t played too much of International Cricket over the last 12 months, however, recently they hosted West Indies in ODI and Test formats. They beat West Indies quite convincingly by 3-0 in ODIs and lost the Test series by a 0-2 margin.

Opener Tamim Iqbal will be leading the Bangladesh side even as Shakib Al Hasan will miss both ODI and T20 squads. They got beaten 3-0 twice in their last two tours by New Zealand. They will be hoping for much more improved results from their previous tours.

It will be partly cloudy throughout the day in Dunedin with the temperature will be ranging between 13 and 16 degrees Celsius and the humidity will be 72 percent. There is no forecast of precipitation for this match.

Home side New Zealand has never lost an ODI here. The short boundaries will make a huge difference for both sides in achieving the big scores. The surface is likely to help the seamers upfront with the new ball. We can expect 300 plus scores from the team batting first, and the team batting second can always be optimistic in the run-chase.

Stand-in skipper Tom Latham is a stylish left-hand batter who can time the ball really well. He will be playing his 100th ODI against Bangladesh on Saturday. In his ODI career, he has scored 2696 runs at an average of 32.88 with the highest score of 137.

After an impressive show against Australia in the T20I’s, Devon Conway is all set to make his ODI debut against Bangladesh. In his List A career, he has scored 3104 runs in 78 innings at an average of 44.98 which comprises 8 centuries and 18 half-centuries.

Bangladesh skipper Tamim Iqbal is coming from a successful ODI series against West Indies, scoring most runs in the series with 158 runs in 3 matches at an average of 52.67. He has got a huge amount of experience in the ODIs and has scored 7360 runs in 208 innings at an average of 36.98.

Liton Das had a quiet home series against West Indies, but he is a capable batter who can score runs at the top of the order. In his ODI career, he has scored 1115 runs in 39 matches at an average of 30.14 which includes 3 centuries and 3 half-centuries.

Mahmudullah is another experienced campaigner in the Bangladesh line-up, who has played 191 ODI matches and scored 4143 runs at an average of 34.24, and picked up 76 wickets at an economy of 5.17. 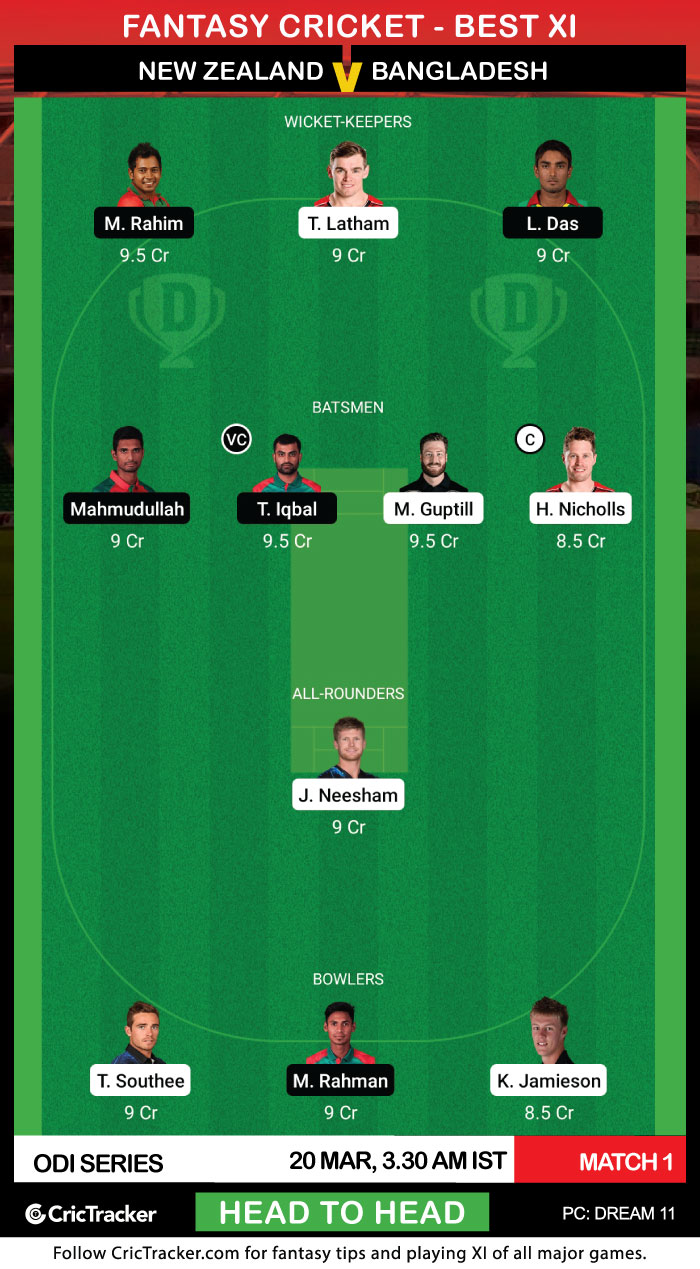 Tom Latham, Mushfiqur Rahim, and Liton Das are all wicket-keepers who can build the innings and score runs as well, consider picking them in one of your Dream11 fantasy teams.